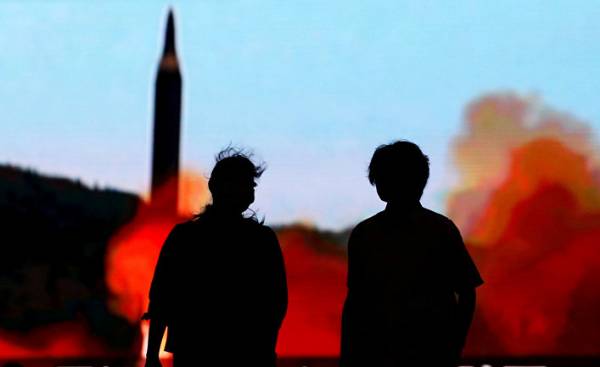 Many emphasize that the solution to nuclear and missile issues of the DPRK, the necessary military method, however, it is important to take the situation coolly, putting pressure through economic sanctions coupled with dialogue.

The US and the DPRK exchanged tough statements, not excluding war. The result of the aggressive statements could be the aggravation of tensions and the occurrence of unpredictable situations.

The source of the problem — North Korea. In July she twice launched Intercontinental ballistic missile (ICBM). The formulation adopted nuclear missiles, whose range will be in the territory of the United States, is becoming more real.

Some experts believe that the DPRK has succeeded in reducing the size of nuclear warheads. There is no doubt that developments are moving faster than expected by the US government.

Can’t ignore the fact that the DPRK released a tactical plan, under which will be simultaneously launched four rockets “And 12”. They should fall near the island of GUAM. It is a warning to the United States. The plan will be ready by mid of this month and will only have to wait for the order to launch.

It is obvious that Pyongyang wants to pressure the US and the ROK, which Aug 21, plan to start joint military exercises.

GUAM is a U.S. air force base where deployed strategic bombers. If the missiles are launched, military tension will increase to the limit.

Naturally, the General Secretary of the Japanese Cabinet Yoshihide Suga (Yoshihide Suga) protested: “This is an obvious provocation. We are against such activities.”

According to Defense Minister Onodera, the situation qualifies as an emergency that gives you the opportunity to exercise the right to collective defense.

If this happens, it will be possible to shoot down missiles and rely on the help of American warships. The Japanese government must closely cooperate with the United States to prepare for different scenarios.

It is also troubling that the President trump has warned North Korea: “Better the US is no longer threatening. Otherwise you’ll have to face the wrath and flames of which the world has not seen before.” The President rarely uses expressions that remind about the possibility of a nuclear strike.

They can be perceived as a red line after crossing which the U.S. will take military action if North Korea will conduct another nuclear test and launch a ballistic missile. You should avoid reckless and dangerous actions and expressions.

U.S. Secretary of state Tillerson expressed the idea that Washington does not consider the DPRK the enemy and ready to dialogue. Trump needs to adjust policy in his own administration and to strengthen cooperation with its allies, including Japan and the ROK.