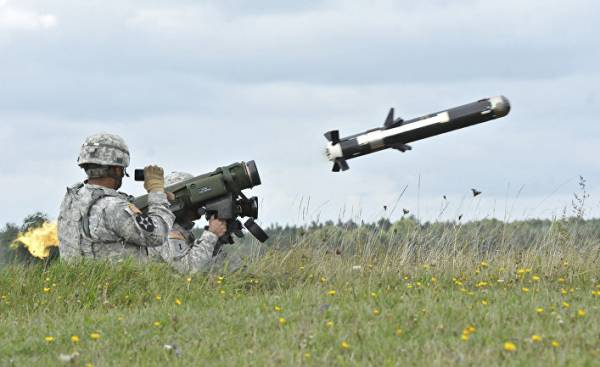 In three years of war with Russia and Pro-Russian separatists in the East of Ukraine the soldiers of the Ukrainian army used American symbols on the front lines, to intimidate or taunt their enemies, sometimes, coming to this rather creatively.

For example, the Ukrainian military raised the flags of the United States, usually in response to sniper fire, or mortar fire from the uncontrolled territory. Sometimes, to really annoy the enemy, English-speaking Ukrainian soldiers could transmit radio messages in English for unencrypted channels, pretending is a soldier of an elite unit of American Navy seals.

In 2015, frontline Crimean village near the occupied Lugansk, the Ukrainian military has renamed a street bearing the name of the Soviet leader, in honor of John McCain.

However, when the canadian journalist and filmmaker Christian Boris asked the soldiers, when are they going to call out the name of then-US President Barack Obama, the military said, “When he will send us arms.”

From the beginning of the war in the Donbass in April 2014, the Russian propaganda wove stories about the U.S. armed forces who allegedly are involved in the fighting on the side of Ukraine. So the Ukrainian military know that such a demonstration of American support — it is also a powerful psychological weapon. Any support of the US stimulus, the chance to boost morale.

“US support for Ukrainians show that the power is on their side,” — said in an interview with The Daily Signal Mamuka Mamulashvili, the commander of Pro-Ukrainian Georgian national Legion.

And now, after three years of war, the Ukrainian military will be able to get their hands on another tangible confirmation military support to the United States. What they would like to have the most weapons.

According to the Wall Street Journal, the U.S. Department of defense and the state Department has developed a proposal to provide Ukraine with lethal defensive weapons, including anti-tank missiles Javelin. The U.S. Congress has already approved the sending of such weapons for defensive purposes.

According to the publication, President Donald Trump may need another few months to make a final decision on the supply of arms to Ukraine. However, the Ukrainian military still took the news with enthusiasm.

“Support our struggle for independence from the United States will undoubtedly raise the morale of soldiers, said in an interview with The Daily Signal Ukrainian sniper Alexander Pochinok. — Supply such advanced weapons systems as the Javelin, will bring our victory.”

States provide Ukraine with technical and military aid, beginning in 2014, when Russia invaded Crimea and annexed the Peninsula, and then began the war in the Donbass.

Today, the President trump has not yet abandoned Obama’s decision not to arm Ukraine. However, the supply of lethal weapons Ukraine would mean a huge shift in US policy. Ukrainian and international experts agree that the true value of such a step will affect not only military operations.

“Actually, the weapon itself is unlikely to change the course of the fighting, says the Lieutenant of the Ukrainian army Andrei Mihalchenko. — Deliveries of American weapons in the first place will have a psychological effect on the Ukrainian army and the separatists, with whom she fights. This step confirms the seriousness of the US as a strategic partner of Ukraine.”

Mamuka Mamulashvili commanded a group of 130 foreign soldiers, who for three years defending the interests of Ukraine in the Donbass and fight there against the Russian-separatist forces. Georgian national Legion consists mostly of veterans of Georgia. Many of them have real combat experience — participation in the Russian-Georgian war in 2008, U.S. military operations in Afghanistan and Iraq. In the Georgian national Legion also serve as soldiers from other countries, including the USA, Austria, Armenia, Azerbaijan, Germany, Hungary, Moldova, Russia and Chechnya.

“It is our common task is to fight the aggressor, — said Mamulashvili. — I understand the role of foreigners in the war: Ukrainian soldiers are more motivated if they see that they help foreign military. Ukrainians feel that they are not left. If the U.S. will send Ukraine the weapons it the next day to change the military situation in Donbass”.

He believes that the Javelin — a weapon that has an enormous symbolic value and practical military utility. “On the front is a lot of Russian equipment. Therefore, we need American arms — emphasizes Mamulashvili.

The magic bullet does not exist

Uncontrolled territories in Donbas is now one of the most militarized places on earth. According to the Ukrainian intelligence, Russian-terrorist groups in the East of Ukraine is now 675 tanks, 478 of which are still active. The separatists also have approximately 1,300 armored personnel carriers, artillery 81, 95 missile with multiple missiles and more than 4 thousand air defense systems.

In total, the troops of the aggressor is a 34 thousand separatists and foreign mercenaries, as well as about 3 thousand Russian officers.

In addition, near the Ukrainian border centered about 100 thousand Russian troops, which, like the sword of Damocles, constantly threatening invasion of the country.

“Russia is already in Ukraine, and she’s well armed, — said in a recent interview with “Radio Liberty”, the special representative of the United States Ukraine Kurt Volker, visiting the plant in the East of Ukraine. — There are only the Russian tanks more than in the whole of Western Europe put together.”

For its part, Kiev has about 60 thousand soldiers in the ATO area.

Luke Coffey, Director of The Heritage Foundation for research in the field of foreign policy, in an interview with The Daily Signal said: “the US should understand that the supply of weapons will not be the “magic pill” to resolve the crisis in Ukraine. Needs to be developed more ambitious strategy for overcoming the Russian aggression.”

Moreover, according to The Wall Street Journal, many US weapons delivered to Ukraine must be removed from the line of contact at a safe distance. Its use is possible only in case if Russia will again begin to escalate.

But even if the expected American arms will not be involved, the Ukrainian troops insist that the move would be an important psychological victory for their country.

“Moral support for us now is very important… we feel that we are not alone in our struggle,” admitted The Daily Signal Sergey Tsyhipa, a former major in the special services of Ukraine and a war veteran. This year Russia uses tanks to more aggressive attacks on Ukrainian positions, — said the military. And such anti-tank weapons like Javelin, to restrain these attacks.

“The supply of us weapons to Ukraine for two purposes, says Tsyhipa. — First, this kind of diplomatic pressure on Russia. The Kremlin does not believe that the White house may take such a step. Secondly, it is a real military help. Because the Russians are really afraid Javelin”.

Lieutenant of the Ukrainian army Andrei Mihalchenko, who came face to face with Russian tanks in the battle, confirmed that the Javelin will help to keep the Russian heavy equipment.

The war in the East of Ukraine continues to kill both military and civilians on both sides of the conflict.

The attempt at a ceasefire in February 2015 under the title “Minsk-2” has not helped to end the fighting. Russia still supplies arms to the separatists and sends to personnel.

But Ukraine in 2014 has radically reformed its armed forces. So, if in 2013, the defense spent about 1% of GDP. Today the state’s defense budget is about 6% of GDP.

Ukrainian officials and international experts believe that Russia can beat Ukraine in a direct confrontation. Russia, which is 3 times more than Ukraine in terms of population and 10 times the volume of GDP, has an army of 800 thousand troops with a reserve force of 2 million people. The defense budget of the Russian Federation for 2015 was about $ 65 billion, which is about 10 times more than in Ukraine.

However, now the Ukrainian military is able to respond to the Russian aggression and have an army much stronger than in 2014.

“Let’s see how Ukrainians defended themselves without any US support, says The Daily Signal President of the American Committee of the Congress of the United States Andrew Futey. — They are fighting with outdated weapons and ammunition. Give Ukrainian armed forces the proper tools and they will succeed”.

Reborn from the ashes

In 2014 Ukraine began reforming its military-industrial complex. Currently, the country has developed a modern system of weapons; new tanks, armored personnel carriers and aircraft, which will increase the combat power of the country.

From 2011 to 2015 years Ukraine was the ninth largest exporter of weapons in the world. Last week, the Ukrainian concern “Ukroboronprom” declared that the proceeds from arms sales last year grew by 25% from 570 to 770 million dollars.

According to the Lieutenant, Mihalchenko, the United States has already provided the Ukrainian military with technical assistance. And appreciate it at the forefront. “This applies both to the training of our soldiers by American instructors, and delivery equipment: radar anti-tank batteries, radios, vehicles, night vision scopes, thermal cameras and much more,” — said Ukrainian military.

However, in the US Administration are in no hurry to send to Ukraine lethal weapons, despite the approval of this decision by the us Congress. The most popular reasons: fear of escalation of war or further destabilization in the region.

However, the Ukrainian military and the soldiers believe that Russian aggression cannot be stopped “soft power diplomacy”. Ukrainians are at war, not only for their country but also discourage Russian aggression in Europe. “Ukraine is a border between the civilized world and barbarism,” — said Mamuka Mamulashvili.

Andrew Futey, who heads the American Committee of the U.S. Congress, said that Ukraine is a valuable partner for the United States. “The supply of weapons is a sensible hedge against destabilizing Russia’s aggression in Eastern Europe and the middle East. Sending lethal weapons to Kiev, the United States again will be able to confirm its leading role in the world and will stand shoulder to shoulder with the Ukrainian nation”, — he added.

For the week from 27 July to 2 August in the fighting in the Donbass killed three Ukrainian soldiers, more than 20 soldiers were injured. The war is not over. And, ultimately, Ukrainians believe that their own persistence is far more important for victory than the US weapons. “Even without American help, but sooner or later, we will win, — says the veteran of the ATO Sergey Tsyhipa. — We must do it. Even at the cost of his own life.”