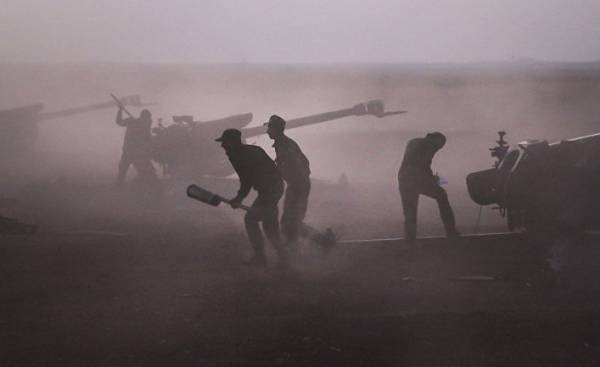 Two thousand Russian “contractors” arrived in Syria in early August to participate in operation protect and strengthen the most vulnerable points on the border of Israel and Jordan.

The news was reported by a source in Israeli intelligence, after which it was published by the website Debka.

They will join the 3,000 soldiers already present in Syria to support operations to protect the civilian Syrian infrastructure. It is possible that many of them are involved in special operations.

According to the same site Debka, Syria profits also groups of Sunni Muslims from Ingushetia, a Caucasus Republic, famous for its fighters. According to the official version, the Russian soldiers-the Muslims enlisted in the troops of the military police, but, according to the Debka website, their mission is to combat terrorism. Moscow’s decision to send to Syria a Russian soldier, professing Sunni Islam, obviously, due to the need to build privileged relations of cooperation with the Syrian population, mostly consisting of Sunnis. So Russia can play unfamiliar in the West of the map due to the fact that is one of the largest multicultural countries in the world.

According to information, the contractors assigned to relevant private military company, PMC, better known as “the Wagner Group”. Wagner is the surname of its founder, whose identity is unknown. Western intelligence agencies believe is Dmitri Utkin, who until 2013 was a Lieutenant Colonel in the second brigade of special forces in Pskov. There is one old photo “Wagner”, published in St. Petersburg “Fontanka”. Today, the website Debka has published another, newer photo.

Legendary character Wagner left the composition of the elite unit, worked, as speak, the Moran Security group is a private enterprise specializing in Maritime defense and the fight against pirates. Then he laid the foundations of his current company, restoring the “Slavic corps” — a group of mercenaries sent to Syria in 2013 (i.e. two years before the entry of Moscow into the conflict) under the contract as private contractors to protect oil wells. The activities of the “Slavic corps” “tragically” ended in November of that year. Then in Deir ez-Zor almost 200 Russian mercenaries are faced with more than two thousand jihadist fighters, and they had to retreat with the wounded, leaving the on-site material resources and documents.

Many of the returnees contract was subsequently arrested by the FSB for violation of national security laws, as this kind of activity at that time was in Russia under a ban.

Today things are different. The Russian Parliament is considering a variety of legislative initiatives to make legal the use of private military contractors under the control of the Ministry of defense and use them in operations abroad.

On the one hand their work in Syria, even beyond the scope of operations to protect civilian infrastructure — known fact. A year ago, Reuters published a dossier on the Russian “soldier Ghost” killed in Syria during the fighting in Palmyra.

Otherwise, the use of “contractors” in current military scenarios — a common occurrence in Western countries, and meets the new requirements of modern warfare.

The American company BlackWater (now renamed the Academy) is one of the most famous mercenary structures in the world, though her fame is partly due to such catastrophic actions, like the operation in Iraq.

The reason is simple: when “private soldiers” operate without the direct control of the military command of his country, extremely high chances that their intervention will turn into aggression indiscriminately or lead to “collateral damage”. Different rules for recruitment, functioning on the territory.Often differ and the reasons for the warfare.

Among the many cases that became known to the international community, one of the most tragic in 2007 was the massacre at nisour square in Baghdad, where the convoy of BlackWater contractors killed 17 Iraqi civilians and wounded 20 more. This massacre led to a crisis in relations between governments and a temporary suspension of the license for the company’s work in Iraq.

This discouraging (to put it mildly) of a movie that was originally published Harper’s Magazine, you can see the number of actions committed by us contractors in Iraq and beyond all conceivable limits. They, for example, embodied as an armoured vehicle shoots down an Iraqi woman, when this column did not even bother to give her any help.

This is one of the reasons why the Kremlin has always been wary to use “private militants” in the hostilities. Therefore, their arrival in Syria takes place under the full control of the Russian operational headquarters.

The Israelis are concerned because the placement of groups of mercenaries and Muslim soldiers at the borders with Israel limits the ability of Moscow to control the Pro-Iranian militias and Hezbollah, which involves a ceasefire agreement.

Until today the Russians have demonstrated impressive efficacy in Syria, in military operations and in the search for diplomatic ways of resolving the crisis. This efficiency surprised even their “Western enemies”.

Putin’s actions during the Syrian crisis was significantly different from the disastrous steps Obama: enough to recall the famous moderate rebels, whom the CIA for many years has provided billions of dollars. And when trump suddenly it was noticed that the weapons and the money was in the hands of groups, “al-Qaeda” (declared a terrorist organization and banned in Russia — approx. ed.)

The US interest was in violation of the order in the region, turning Syria into a second Libya, the overthrow of Assad, even through the promotion of LIH (declared a terrorist organization and banned in Russia — approx. ed.). This was in line with the aspirations of their Saudi allies, the true authors of jihadist terror. And Moscow’s interest was the opposite — stabilize the situation in the region with the understanding that the division of Syria would entail the extension of Islamic integralism up to Central Asia.

At the moment Putin won. We can say that fortunately!