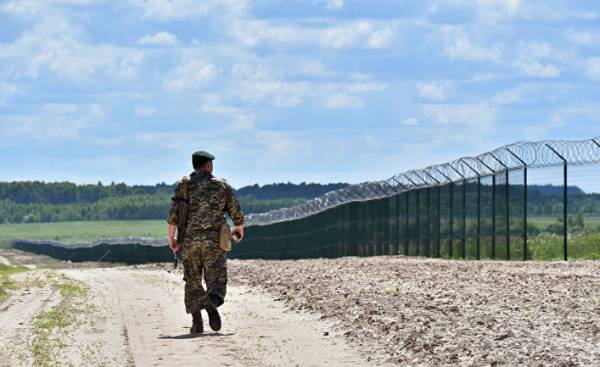 Bill No. 7017 in the Verkhovna Rada registered the head of the faction “Block of Petro Poroshenko” MP Artur Gerasimov and President’s representative in Parliament, the MP Irina Lutsenko. The bill envisages punishment in the form of deprivation of liberty for a term up to 3 years for citizens of the aggressor country or other persons acting in interests of the aggressor country, for illegally crossing the Ukrainian border, re-crossing up to 5 years imprisonment. Tougher just want to punish for crossing the border with weapons — up to 8 years in prison. “The project was developed with the aim of promoting the protection of the sovereignty and territorial integrity of Ukraine by criminalizing illegal crossing of the state border representatives of aggressor state”, — stated in the explanatory note to the document.

The authors remind us that until 2004 the legislation of Ukraine provides criminal responsibility for illegal crossing of the state border, but in 2004 the relevant article (331) of the Criminal code was excluded. Now the Ukrainian legislation provides only administrative responsibility for similar actions: 1,7-3,4 thousand UAH of a penalty or administrative arrest up to 15 days, and in case of violation by the group or a repeated violation within a year — a fine of from 3.4 to 8.5 thousand UAH.

In political circles and the expert community views on new initiatives divided. So, according to the people’s Deputy from “popular front” Dmitry Tymchuk, such step is quite justified, given the current relations between Russia and Ukraine. “Donbas illegally crossed the border, the Russians were first seized administrative buildings, and then in the form of armed groups acted against the Armed forces of Ukraine, so such initiatives in current conditions can be considered quite justified. We have there is the fact of aggression of Russia against Ukraine, that is, the status of Russia and our relations with it is a special question. Russian soldiers, Russian mercenaries who now travel to the Donbass, should know that they automatically, crossing the border of Ukraine, even the area that is not controlled by Ukraine, violated Ukrainian law — and not in terms of administrative responsibility. That is, they become criminals”, — said Tymchuk “Apostrophe”.

However, according to the former head of the foreign intelligence Service of Ukraine Mykola Malomuzh, such measures will be ineffective, as intelligence agencies of Russia will still find a way to get to Ukraine. “Such actions will do nothing practical, since the security services of Russia will still be able to penetrate the Ukraine, they still will find those formats that will allow them to forge documents about the Ukrainian citizenship, visas, if need be. In addition, there will be retaliatory actions against Ukrainian citizens, and is, open data, about 3 million Ukrainians in Russia. It is clear that not all will be accordingly to the paperwork, and it will also be used by intelligence agencies, border guards and police for their persecution” — he expressed his opinion of the “Apostrophe”.

“There would be a more effective form is target work on specific Russian citizens suspected of any terrorist acts or the penetration into our territory, it must be the work of border guards, security intelligence, the police, and only bans will do nothing”, — said Malomuzh.

The former head of the Main investigation Department of the security Service of Ukraine major General Vasily Vovk drew attention to the fact that such measures will be difficult to implement in practice, after about 400 km of the Ukrainian-Russian border remains under the control of militants in the Donbas.

“How and who will fix? Why do stillborn article in the Criminal code?— wolf says “Apostrophe”. — No relation to terrorism it does not and cannot have, as previously announced the measures for the electronic register of the Russians. All this PR moves that rulemaking, to the prevention of terrorism are irrelevant. And I would ask deputies not to disgrace and not to vote for this bill. Fighting terrorism is a specific fight in which should be a network of agents, good operational information. If it is, then do not need any negotiation of entry, not need any liability for illegal border crossing”.

Also, the General-the major of SBU considers improper imposition of special penalties solely for citizens of the Russian Federation.

“It is nonsense in the rulemaking, to bear criminal punishment only by the citizens of one country. If there are violations, to which the country would belong to the man, he should be responsible, so this initiative is absolutely not stand up to scrutiny. And we already had criminal liability with the same term in prison for illegal border crossing, and we removed them, given our attempts to go to Europe,” — said Vovk.

International lawyer Andrew Buzarov agrees that it is not correct to introduce such measures only against the Russians, although notes that such methods are acceptable in war.

“From the point of view of international law, in the interests of national security — Yes, it is justified. For example, Donald trump initiated the bill, which prohibits citizens of 7 countries to enter a period in the United States, and, in the end, the Supreme court declared that this decree was legal. Therefore, in the current environment, we too can take similar measures,” he said in comments to “Apostrophe”.

The expert reminded that the citizens of other States, and so bear the punishment for illegally crossing the Ukrainian border but an administrative, not criminal. “Obviously, here attempts to minimize the infiltration of citizens from the zone ATO, Donbass. In this case, they should be subject to appropriate criminal penalties in the form of imprisonment”, — concluded Buzarov.

Trump and Moscow: a black-and-white approach is inappropriate