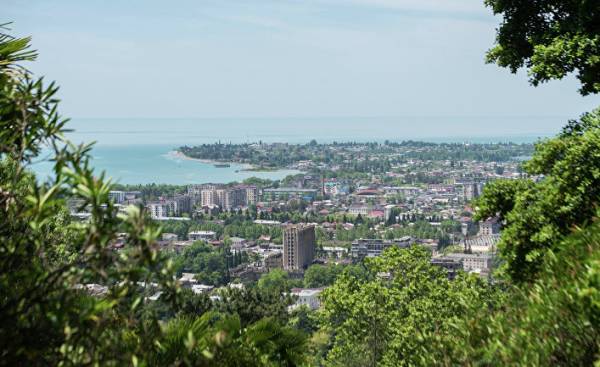 In Abkhazia on 8 August waiting for Vladimir Putin. His visit will take place on the ninth anniversary of the five-day war — an event that significantly altered the Caucasus.

For more severity of the situation adds that the Russian leader will arrive in Sukhum, just a week after Baltic-Caucasian-Balkan tour Vice-President of the USA Michael Pence. The second person in the administration of Donald trump, he is not just expressed support for Georgia in its confrontation with Russia, but also actualized the idea of joining this Transcaucasian country to NATO.

But can we consider the forthcoming visit of Vladimir Putin to Abkhazia only as a response to the actions of the us Vice President?

Russian foreign policy in the country and abroad is often seen as a reactive policy. If we talk about the Transcaucasian conflicts, in Moscow for a long time they did not seek the “unfreezing” and change the regional status quo. Despite the fact that the Abkhaz and South Ossetian leaders repeatedly throughout the 1990s and much of the “zero” years were asked about recognition, the Kremlin continued to support Georgia’s territorial integrity and defend the position in different formats of negotiations and peacekeeping operations. And only when this policy fails, and the “unfreezing” of the conflict became inevitable, the approaches of Moscow began to evolve. It happened in August of 2008 and before, but the five-day war was the transition of quantitative changes in the quality of political decisions.

As a result, in Transcaucasia formed a second after the Soviet collapse, the status quo, which established two parallel political and legal reality: the same territory — the former autonomy of the Georgian SSR — exist as independent States, Moscow and the occupied territories of Georgia for Tbilisi and Washington.

Happened in a sense, the division of spheres of influence. The fact that at the time Angela Merkel called “sound Georgia,” has strengthened cooperation with the United States, NATO and the EU and Abkhazia and South Ossetia received military-political guarantees and economic and social recovery from Russia.

Among other things, led to the fact that Moscow on Abkhazian and South Ossetian direction formed its own agenda, which has something is tied to Georgia and the United States, but in some ways has its specific inner dynamics. Because no matter how many experts say after 2014 on the “repetition of the Crimean incident” for South Ossetia, nothing like we have not seen. At the same time, the Abkhaz politicians emphasize that the South Ossetian projects on joining of the Russian Federation to the Republic is not a guide to action.

Speaking about the visit, Pence, we should not overestimate the novelty of his proposals. That Georgia joins NATO, it was known even in the decisions of the Bucharest summit in April 2008. Since that time these documents has not been reviewed and has not been canceled. At the same time until now, Georgia, like Ukraine, has not received even a Plan of action for membership, the penultimate level before joining the Alliance. Never told about any deadlines for receiving and Michael Penny.

That the non-entry of Georgia into NATO does not prevent US to develop the bilateral military-technical ties with Tbilisi is also known not the first year. The Charter on strategic partnership, signed in January 2009, also applies. And in this respect the Pens in the course of its negotiations with Giorgi Margvelashvili and Giorgi Kvirikashvili, “America did not open”. All ideas and statements made by the Vice-President of the United States, are in keeping with the policies of the previous administrations. They do not prove anything, except continuity of American foreign policy in the Transcaucasian direction.

Of course, in the upcoming Russian visit to Abkhazia of American intentions and actions of official Tbilisi will be commented. But the main thrust is likely to be different.

The five-day war opened a new page in relations between Russia and partially recognized republics. In Abkhazia and South Ossetia are a feature of politicians and experts, but also ordinary people consider Georgia as the last step, and not one of the options for the choice of the future.

In relations between Moscow on the one hand, and Sukhumi and Tskhinvali on the other, albeit asymmetric, has its own agenda. Russia is interested in the situation with the security of its own citizens. Unfortunately, numerous incidents of a criminal nature gives reason for concern. In Abkhazia not so long ago held parliamentary elections, which were an attempt to overcome the political split. Itself this split, among other things, based on the relation to efficiency of use of Russian aid, which ultimately raises the question of the quality of managerial elite. Many of the recent emerging stories directly relate to the issue of the effectiveness of bilateral agreements (especially in terms of interaction between law enforcement agencies).

After 2008 Abkhazia by the Russian military-political safeguards to implement their own national project. This happened exactly nine years ago, and this symbolism is, of course, will always be present during the visit of the high guest.

Then Abkhazia, there is a different agenda, in which the Georgian threat has gone by the wayside, and at first went the quality of their own statehood. Albeit with certain reservations concerning the limited number of recognitions of the new status of the Republic.

All successes and failures on this path will be inevitably recorded and at the expense of Russia, which went the way of the recognition of Abkhazian independence, which was and still remains a risky foreign policy step. Moscow is ready to emphasize that its decisions adopted in August 2008 are irreversible. But she’s also extremely interested to see a real, not a PR success in those entities, who have decided to maintain diplomatic and military means.