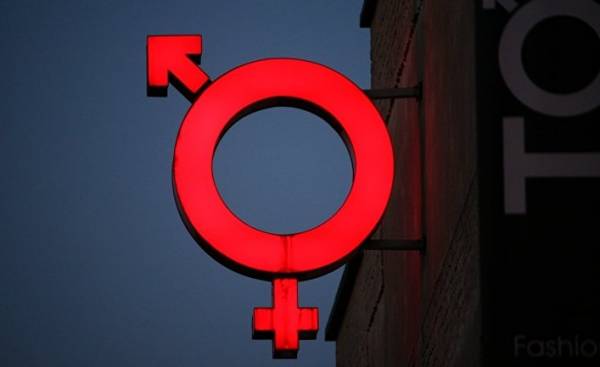 “This is even was not imitation of democracy, but a kind of police state, which was not functioning and just collapsed…” (Ursula K. Le GUIN “the Cutter is in heaven”)

Why I started the article with a quote from writer Le GUIN? Just because her book, which is set in 2002, is one of dystopian novels describing a situation where dreams become reality. First, they threatened her, and then just destroy it. The story, what we dream, and who controls our dreams. Sigmund Freud noted that a significant part of human personality is the sexual drive. In Roman society knew that it was important to give people bread and circuses. Long before Sharon stone in basic instinct crossed legs (in real hyped in the media, the political life of her crotch with no panties on in 2013 showed playful one Serbian journalist Serbian Prime Minister Ivica Dacic, who held the post in 2012 — 2014 years), it was clear, not only Hollywood that humanity can be manipulated with sex and violence. Regarding the latter, the more brutally the better. As for the hyped media of the sex, then over time the logic was the same. Foot to foot with no underwear has long been insufficient. Need something “hotter”. The emphasis is either on perversion, or on unconventional. You must call the demand for artifacts of this type. We need to teach people how to think, look and listen in a certain way.

Education through sex and violence were engaged just Hollywood. And as far as Hollywood being manipulated by politicians, it is clear since the very probable murder of actress Marilyn Monroe committed in 1962. Hollywood Studio has become a factory of dreams, which provided the West dominance in the culture. It provoked a split within the USSR. The Soviet Union collapsed not because of the arms race since the “star wars” Reagan, as many still mistakenly believe. Just the Soviet Union lost its own cultural landmark, allowed themselves culturally to lure (or bribe?) phenomena of sex and violence. Rock music and underground video erotically violent and violently erotic (pornographic) content has destroyed its own traditional world of the USSR. The Soviet Union collapsed, but in some Soviet republics still ongoing civil war. This suggests that the problem was not only in the party and communism. Under Boris Yeltsin, the Soviet defense enterprises gave the Americans a lot of military secrets, and the Americans did not hide his surprise. Modern Russian defense industry still uses the Soviet legacy in the field of military development and defense production. But it is culture that spread along with the Western style, the USSR collapsed. I am stating this simply as a fact without emotion. Probably a lot of emotions have gone through the Beatles, when in the UK they are criticized for the song Back in the U. S. S. R., in which they exposed the intention of the West to deal with the Soviet Union through sex: “I can not stand a Ukrainian. West in tail, Oh, Yes. I want them to sing, to shout. Georgian women in my thoughts forever… I’m back in the USSR. So lucky you, my friend. Back in the USSR”.

It is not in the political parties and the free market, that everyone was only thinking of myself to be able to use it (working) power and “nationalize” his first untroubled mind. The most staunch anarchists, economists and politicians, as they say, people in white collars and ties, and grey cardinals behind them.

But what happens to us in Europe now? There is something quite incredible. Continues the same process. Happens the same that happened with the Soviet Union. We are losing culture, and this contributes to the film, performing a strange political order, which under the guise of multiculturalism and tolerance turns of fans of cultural artefacts (i.e. not only EU citizens) to selfish consumers, who have nothing but their own metrosexual needs. An interesting phenomenon of modernity perfectly exposes the film American psycho (USA/Canada, 2000). He is one of those smart strips, which can evaluate allegedly not every viewer. There are films that are continued on forums on the Internet: panelists share their views on the meaning and message of viewed movie, parses it into quotes.

This process is probably more important than the film itself. Sometimes Directors allegedly counting on it. They give the echoes of the sound film after the credits of your own creation. The viewer is drawn into the action. Fiction is intertwined with reality, where there is a dispute. It becomes a way of life, and on the viewer wearing glasses. Through them he looks at everything else, a direct witness of what he (not)a, and their influence positively and negatively. But the “lifestyle”. The current trend popularitywith homosexuals. They have always existed and represent a minority of up to four percent. Their existence of course, but not the norm from the point of view of reproduction. Not so long ago I argued that the family is the Foundation of the state. But now it turns out that this is not so. And it’s not even that in the Czech Republic every second marriage (!) splits and any prominent politician at some key point in their political campaign to “upgrade” his wife as well as German professors change their cars, and clean students — socks.

In 1962 in Prague publishing house Orbis published an interesting book Jiri Klubowa “Marriage and family in the past.” Only briefly, I note that in 60 years we have published a very interesting and well written book that is certainly true of the book Klubowa. The author introduces readers to how marriage has evolved over the centuries in different cultures, as brought up children, what was the annual increase per thousand population, as men sought women and women — men and many others. This book is really worth reading. By the way, you can learn from it that there was a time when the basis of society was not the family, tribe or clan. In those days reigned matriarchy, and the focus was on the phenomenon of women giving life, that is the guarantor of the kind. The story going forward, and the development of the “economy” has led to the fact that small communities viable, and no longer had to stay true to the whole tribes. Modern family was born in the form in which we have long believed in it: mom, dad, son, dog. But times change and we change with them (tempora mutantur et nos mutamur in illis). Today we are witnessing the era of unisex. The bearded Eurovision winning singer, taken from Mosul to evacuate the “bearded women”, women mastered the once exclusively male profession and flexing muscles in magazines about bodybuilding. The clothes fit both women and men. Women in the army have special adaptations so they can urinate standing. And men did not learn to pee sitting down so as not to create problems raised or lowered toilet seat. But much more serious consequences of artificial procreation. Now you can freeze sperm and eggs. You can do the artificial insemination, affect the level of genes to gender or eye color… Pair is not necessary to marry (to marry) due to fraud with allowances for children. Today one man theoretically and practically may be enough to get a child. In a traditional family is no longer necessary. Then why not trust children a couple of gays or lesbians?

The traditional objection about the problem of adoption of children by couples of the same sex: wouldn’t the child miss father or mother. Today, however, many men indistinguishable from women as women from men. And it’s not that they all wear skinny jeans or leggings, and the style of behavior. We often see men with women’s behavior or taste and women with a male worldview. And this is no disease, just women don’t need poetry, although men still feel the need to write them. Why modern films deliberately focus on homosexuals? Would get the film “Moonlight” in 2017, “Oscar” without the role of a homosexual? Or there is a need to match a modern cliché, because traditional relationships men and women is no surprise?

To justify the title of the article, I wonder why the French President Makron asked the President of the Russian Federation about how life for homosexuals in Chechnya? Putin said that homosexuals in Russia equal rights to all, but officially no one popularitywith. Why Europe is worried, and why in Europe homosexuals as a particularly isolated? The answer is in paragraph 12 of the sexual prohibitions of the revolutionary proletariat, set out in 1924 in the brochure “Revolution and youth”. This text as if copied from the Bible, unless you count the 12 points. The choice of a partner should be subject to the interests of the party (the Communist party, in 1924 the all-Union Communist party (Bolsheviks) — VKP(b) — approx. of the author). Sounds unbelievable, but today there are practically the same rule. In the interests of the EU cucumbers should have a certain curvature, the supply of the Baltic States shall be such, and the promotion of homosexuality — and-so. Why? So the current generation has learned to accept themselves as in the movie “American psycho”. People need to be completely isolated. Large companies such as Czech airlines, constantly make up the ratings of employees so that between them there sprang up personal contacts or friendship. If to do the same in the family, it’s every man for himself. This is best depicted in the movie “Seksmisja” (Poland, 1983). Self-perpetuating society of beings without sex. Now I understand why “Putin’s” Russia interferes. Putin plays sports, does not smoke or drink, work your garden, and everything seems to be fine… Meanwhile in Europe, built military bases, and false tolerance leads to the fact that the EU (it is paradox) is not able to protect its external borders. Repeated what the Soviet Union experienced in 1991? Is there any truth in the words of the writer of science fiction Ursula Le GUIN about the fact that our society is living in a totalitarianism of the most perverted form and not even faking democracy? Remember, as I have done with the media in Poland, or how recently, vojtěch Filip lashed out at Prime Minister Sobotka, and then it will become clear that NATO does not protect us, even within Schengen.