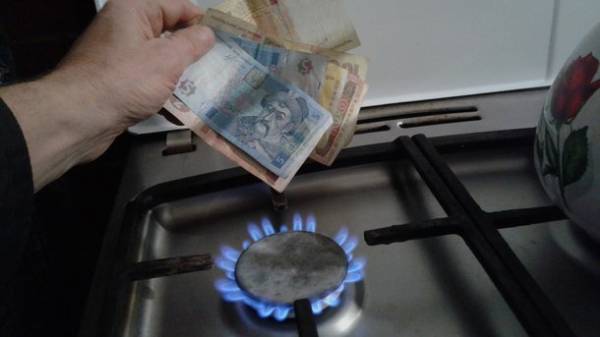 The Ukrainian government in the Memorandum with the IMF has committed until the end of August to share the price of gas. If the decision is accept, the Ukrainians will receive two bills – one for gas as a commodity, the second – for the distribution and transportation of natural gas (so-called subscription fee). This decision complies with European directives and provided by the adopted law “On gas market”. The fourth of August, the members of the national Commission on questions of gosregulirovaniya in strech energy and komuslug (NKREKU) gathered in order to approve the draft changes to methods of calculating “monthly fee”. But activists, including representatives of one of the Ukrainian extra-parliamentary parties, the meeting NKREKU ripped off. The website “Today” figured out how Ukrainians are considered “subscription fee” on natural gas, according to the Commission’s methodology, and who will have to pay more and who less.

What I want to change

“The Commission identifies only 13% in the structure of gas prices – the cost of transportation and distribution,” explains the head of the national Commission Dmitry Vovk. Ukrainians are now paying for each cubic meter of blue fuel 6,8 hryvnia. Officials propose to divide the rate for each cubic meter used to pay six hryvnia + regardless of the volume of consumption of a fixed amount (“monthly fee”). While wolf notes that in the resolution the word “fee” is never mentioned, the innovation is called “fee for transportation and distribution”.

“Consumers always pay for the transportation and distribution, and now it’s in the tariff. In the structure of prices, their share is only 13%. It’s 80 cents per cubic meter (a six hryvnia for gas as a commodity, approx. ed.). The law “On gas market” provides for payment of all services as per capacity. As for transportation, for power, for the storage capacity, distribution capacity,” says the national Commission.

“Consumers always pay for the transportation and distribution, and now it’s in the tariff. In the structure of prices, their share is only 13%. It’s 80 cents per cubic meter (a six hryvnia for gas as a commodity, approx. ed.). The law “On gas market” provides for payment of all services for the power,” says the national Commission.

About 70% of Ukrainian families use gas only for cooking. Gas stove consumes 1,2 cubic meters per hour. A bandwidth meter G1,6 – 2.5 cubic meters. Counter with power less does not happen. That is, the Ukrainian old-school approach can use the capacity of 1.2 cubic meter, and to pay for capacity in a 2.5 cube.

The new method offered for anyone from gas appliances is only a plate, take it to power 2.5 cubic meters, and 1.2 cube. For example, under the old methodology with the meter G1,6 and a gas stove would have the capital to pay a “subscription fee” at 29.3 rate for new still unapproved method of 11.48 hryvnia. So, a family that spends five cubic meters of gas per month, now pays 34,3 hryvnia, and the new method will pay – 41,48 hryvnia (UAH 30 for gas and the hryvnia of 11.48 “license fee”). 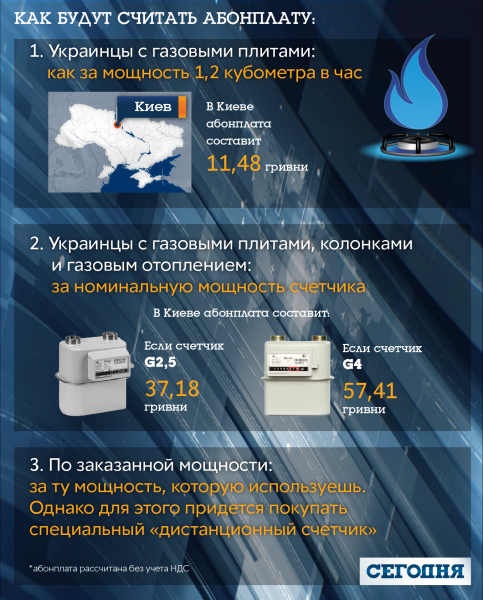 “The counter would be the criterion of the power range, but if a person wants to order power, for example, pakuba per hour – there is no such counters. It merely establishes a means for remote recording of data and can pay for the ordered capacity,” explains the Commission. However, for such a device will have to pay out of pocket.

But for those Ukrainians who use gas for heating, “fee” best. For example, the owners of the meter G4 will assume a capacity of 4 cubic meters per hour. In Kiev with such a “counter fee” will be the 38.2 of the hryvnia (excluding VAT). So, now the family in the capital, which burns in the winter 100 cubic meters of gas per month, have to pay 687 hryvnias, and after the introduction of “license fee” – 638,2 hryvnia.

How to choose the counter

As explained in NKREKU, the Ukrainians have the right to choose and change the counter yourself. Moreover, if you find that the meter is on the balance of the gas and thus its capacity is higher than necessary, the consumer has the right to request to replace the meter at the supplier’s expense. We will remind, according to the Law “On commercial accounting of natural gas” gas meters by 2018 needs to set to all consumers. However, as explained in the Ministry of social policy, the Ukrainians have the right to demand to put a counter in each apartment, not one for the whole house.

There are three types of gas meters over a range of operating costs: G4 G2,5 G1,6. If the apartment is gas used only for cooking (there is a gas stove), plenty of counter G1,6. If there is a stove and gas geyser G2,5, if there is gas heating, you need a counter G4. More than the nominal capacity of the meter, the more “fee”.

We will remind, the national Commission adopted a decision to impose subscription fee on gas in March this year. The decision was to come into force on the first of April, but after criticism from the government and the President of its ruling, the Commission suspended. At the time the subsidy is the monthly fee did not cover, and if it was introduced in may, the Ukrainians would have without the discount to pay for the transportation and distribution of natural gas. The Cabinet of Ministers program grants revised – at the moment discount covers, including the cost of the monthly fee.

As suggested in the national Commission, “monthly fee” Ukraine can return not earlier than in two months. “If August 4 adopted the decision on approval of the project (approval of the act!), I would go report for adoption of comments on the draft. Must publish all the comments with instructions on who submitted them, then you have to gather all who gave comment to discuss. We have justified to reject or accept proposals. After the results of the discussions are published, and then held an open discussion with the participation of local councils, and only after that you can approve the solution. It will take a month and a half,” says the Commission. 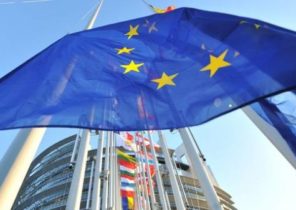