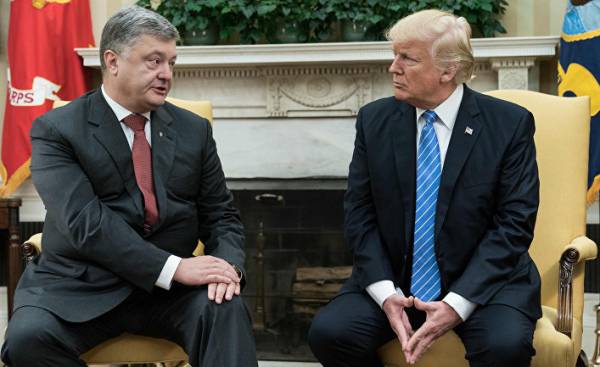 Team President Peter Poroshenko after his conversation with the President of the United States Donald trump vengeance promotes successful communication of politicians, stressing the importance of the fact of such a meeting. But the sources of “Apostrophes” in the government, experts and politicians claim that it is too early to judge the success, because in Washington, the Ukrainian President pointed out that fruitful cooperation is important in fight against top corruption, and there is much success the Ukrainian government does not show. Moreover, the issue of corruption, which is blamed Kiev in the negotiations is much more important than a new strategy of reintegration of Donbass, which the parties hardly spoke, despite the expectations of the Ukrainian society. The Western media mostly paid attention to the meeting, and those who noticed it, called it a “humiliation” for the Ukrainian President.

Appointment of Petro Poroshenko and Donald trump, the administration of the Ukrainian President started to announce in the winter, but in the end, the first negotiations Poroshenko and his American colleagues was held on June 20. Representatives of the presidential team serves as a huge success that trump has met with Poroshenko before with Russian President Vladimir Putin. However, this raises the question, was it worth the rush to the format of the meeting was perceived by several media as “humiliation”. There was not a traditional meeting of delegations in wide and narrow format, no joint press conference, not to mention the other elements of the state, or even official working visit of the head of state with whom the United States has a Declaration on strategic partnership.

“Even an informal dinner at the White house, Poroshenko did not treated” — a bitter joke, one of the Ukrainian ex-diplomats, who spoke to “Apostrophe”.

Indeed, if you compare the trump meeting with other presidents visiting Washington welcome Poroshenko in the format of the Drop-in was more than cool: I went to talk in the next room for a few minutes, exchange pleasantries and photographing, but not full communion of the heads of state.

“Unfortunately, the President and his entourage is not aimed at practical results and to PR. Unfortunately for Ukraine, most of the world media were skeptical about this trip, saw the tension Petro Poroshenko, and the fact of holding the meeting in the format Drop-in is probably one of the lowest levels of the meeting. I understand the politico-diplomatic Protocol, the President of Ukraine would have to accept on the porch of the White house, hold a briefing, then spend it in the Oval office, spend many hours meeting, then a joint press conference, but, unfortunately, it was not. Perhaps this is due to the figure of the Petro Poroshenko and his corruption. But for me the key message was different: not signed no document, there is no practical, at least not yet, a result that can be seen and touched. So unfortunately, we can’t say what the results will be”, — said the people’s Deputy from IN “Batkivshchyna” Serhiy Vlasenko “Apostrophe”.

According to CNN, the meeting of Ukrainian President took place on a “low level”, which is especially conspicuous in comparison with other similar meetings: “the Romanian President Klaus Iohannis was standing next to trump during the bilateral conference, which took place this month… Panamanian President Carlos Varela was greeted by Donald and Melania trump at the South portico of the White house. They enjoyed the long walk along the colonnade, and then a Panamanian and American leaders met in the oval office tete-a-tete”.

Possible, especially the reception was predetermined by the fact that its preparation is carried out not only through official channels, but also lobbying structures, paid by the Ukrainian side. In particular, the disposal of “Apostrophes” were the agreements concluded between close to the banked structure of the “Fund of support of reforms in Ukraine” and the American lobbying company BGR from Washington.

For inquiries nor the foreign Ministry of Ukraine, neither the “Fund of support of reforms in Ukraine” has not explained to that spent 600 thousand dollars (see Appendix 2 of the agreement). At the same time, a former employee of the Ukrainian Embassy in the United States, transferred “Apostrophe” a copy of this document, believes that meeting was spent the money. “The prices in Washington are known to all over $ 250 thousand lobbyists can seriously help in organizing the meeting. But, more importantly, what was needed was a suitable context for the meeting. Just to get to the Tramp will not work even for half a million, if he sees no reason to meet,” he said. Now, trump made sense to meet with Poroshenko in the United States all the more serious unfolding campaign of harassment of the President because of his ties with Russia. Therefore, the meeting with Poroshenko before an important visit to Europe (the summit of “Big twenty” 7-8 July) where probably it will happen the first contact with Putin, was to trump an important counterargument against his enemies in the inter-politics.

After talking with his us counterpart, Poroshenko said that Ukraine will sign with US agreements on defence cooperation, including the agreement on defence procurement and the agreement on military-technical cooperation. He also said that an agreement on the purchase of American coal, which is “to replace coal, the supply of which is stopped from the occupied territories in connection with the confiscation of the Russian Federation of Ukrainian coal mines”.

In Washington, Poroshenko met with trump, but also with the Vice-President of the United States Michael Pence, Secretary of defense James Mattis, Secretary of the country’s Rex Tillerson and other top politicians.

In a statement the White house released after the leaders of Ukraine and the United States, said that the meeting “discussed the support for a peaceful settlement of the conflict in the East of Ukraine and the reform agenda of President Poroshenko and his efforts in the fight against corruption.”

That at the meetings Poroshenko with senior us politicians a lot of times the question was raised the top of corruption in Ukraine, “Apostrophe” said several deputies. According to them, Poroshenko was given to understand that the Ukrainian leadership should better to fight against corruption in all branches of government. In the Verkhovna Rada say that because of this there is a demonstrative whipping of people’s deputies, with which the state office of public Prosecutor asks to remove the immunity and to prosecute, and it is at the moment, five people’s deputies: Oles Dovgy (“will of the people”), Andrey Lozovoy (Radical party of Oleg Lyashko), Maksym Polyakov (people’s front), Evgeny Deydey (people’s front) and Boryslav Rozenblat (the party “Block of Petro Poroshenko”).

However, the representatives of the presidential team does not comment on such conversations about corruption, noting only the importance of the meeting and achievements.

In particular, people’s Deputy from BPP and member of the Verkhovna Rada Committee on foreign Affairs Vladimir Aryev said “Apostrophe”, that many agreements had been reached in the framework of military-technical cooperation and on strengthening sanctions against Russia. “I would not single out one specific to this meeting (with trump), because there were eight meetings at the highest level, and communication with trump is just one of them. The strengthening of sanctions against Russia and military-technical cooperation, and energy cooperation — is still there. I can say that this is probably the most successful visit to America of all the presidential visits, which were, in my opinion,” commented the MP.

According to “Apostrophe” members of the coalition, the strategy for reintegration of Donbass, which is already around the second week of debate in the Ukrainian information space, Poroshenko in the United States with no one discussed. Although before the visit sounded a lot of assumptions, which is one of the points, which will discuss the Ukrainian President at the meetings in America.

According to the people’s Deputy from IN “Batkivshchyna” Oleksiy Ryabchin, the main result, which can be say — Ukraine has friends in the U.S. Senate, but the situation with the administration of the trump is somewhat different: “to Analyze the results we will not be at the meetings, and the results that will. Until we see that we have friends in the Senate to prolong the sanctions, and the administration of the tramp, on the contrary, seeks to ensure that these sanctions do not extend. So far, we can see some controversial things, so important for Ukraine the consequences of the meetings.”

American political analyst on international Affairs Peter Zalmaev stressed that the meeting was successful on only one fact, that it took place, and before the summit of “Big twenty”, where trump will meet with his Russian counterpart Vladimir Putin. “The meeting gives the opportunity to show the Ukrainian people that Ukraine is still, if not a priority, it is an important topic for America and the American establishment understands that not to pay attention to Ukraine will mean to compromise your fundamental principles. Although Donald trump is not itself very they should, they are not for him something important. I know for sure that the Ukrainian President came to Washington with empty hands, he has, among other things, were concrete proposals on the agricultural theme. It should also be understood that in addition to this formal meeting with trump was a long hour and a half meeting with Mike Pence, he (Poroshenko — “the Apostrophe”) was meeting with the two leaders of the Republican majority in the Senate and Congress. He also had meetings with other congressmen, heads of departments, and the Department of state also met with the head of the energy Department, with people in the Pentagon. It was a fruitful visit and, I think that the mere fact of this visit is very important,” noted Zalmaev comments, “Apostrophes”.

The expert also notes that there is obvious progress in Ukraine, and this happens due to certain external factors. “For example, amid the FBI investigation on the topic of relationships trump and members of his team with the Kremlin party, any overtures to Putin now is like death for the President of the United States. And his Republican party are in fact trying to protect themselves, including through the Ukraine to forestall any pretensions towards Putin,” — said Salami.

But the Ukrainian diplomat and ex-foreign Minister Konstantin Gryshchenko advises not to focus on how the meeting went and what the results will be for Ukraine in the future. “The fact that the meeting took place sooner than with Putin, is important from the PR point of view, because our government basically takes care of this, in the same way as the property of trump, they simply have different goals. On the one hand, we can say that it is better that such a meeting was before the meeting with Putin, on the other hand, it is not so much when it was, sooner or later, how much what, in fact, agreed. We do not have any public documents signed by the parties, we are mostly estimates provided by the President or those acting on its behalf. But it’s not a victory, and a lot of clear signals from the American side, there is not so perceive. But, ultimately, it is better that it happened than not happened. We can say that this is the beginning of rebuilding trust between the administrations of the two countries”, — summed up the diplomat “Apostrophe”.