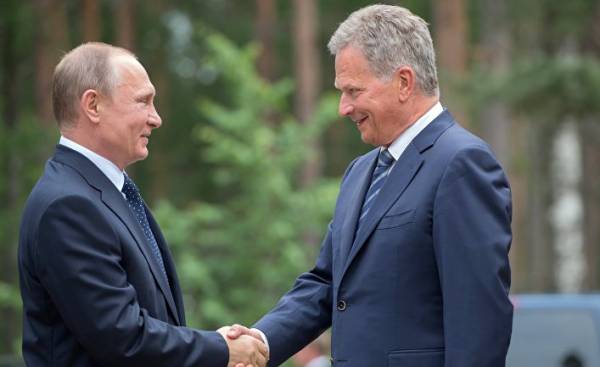 At the airport of Lappeenranta by day 29 July were two of the Russian governmental plane. The first rose in the air cargo plane, and later, at 13:30, the plane with passengers and cargo.

Before the departure before the plane circled the Embassy’s cars, of which in the Luggage compartment of the plane first raised the usual boxes, as well as brown and silver aluminum boxes. The latter in the plane of the assistants to the President raised several boxes of alcoholic beverages — including vodka Koskenkorva.

“The box with the alcohol got into the plane for an hour before the plane rose into the air. A great outcome,” says photographer Ari Nacarii (Ari Nakari), were present at the airport.

Nacarii has sealed boxes that were raised at a special ribbon in the Luggage compartment. Judging by the labels, the boxes were Koskenkorva vodka and cognac Prince Hubert de Polignac. The photographer said that he did not capture all the “Souvenirs”: later the plane plunged another such party.

“The plane went up 100-150 people. The airplane arrived minibuses and other Embassy vehicles,” says Nacarii.

When on a visit there arrives the President, conducted a large-scale training: for example, there is a massive technique, even if we are talking about the visit just for one day. A few days before Putin’s visit, landing at the airport of Lappeenranta has made the Kremlin the Tupolev plane.

The President arrived in Finland on the helicopter, but went home already on the plane.

Great dialogue and exchange of goods. Selected Souvenirs say a lot about the good taste, even though I more like Russian vodka.

A little souvenir from Finland!

In Finland it would be a real scandal if a Finnish delegation brought a “set” after any visit. Perhaps this has already happened, just no one reported this?

Yeah, I think Putin and Niinisto is to have a good drink together and discuss the problems of this world. I trust Putin more than Trump.

And the cheese where?