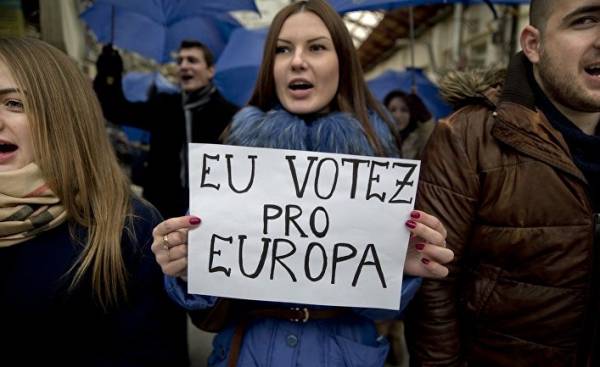 Two of the most influential faction of the European Parliament — the European people’s party (EPP) and Alliance of liberals and Democrats for Europe (ALDE) called for a review of the Association Agreement of Moldova with the European Union. This is stated in the joint statement of chairmen of the EPP and ALDE, which plahotniuc is the leader of the coalition of PDM — psrm.

“With the growing concern of the ALDE and the EPP continues to see deterioration of the situation related to the rule of law and democratic standards in Moldova. Instead of develop the country, the Democratic party (PDM) and Party of socialists (psrm) on the initiative of Plahotniuc (Vladimir plahotniuc, is the Chairman of the Democratic party of Moldova — approx. ed.) chose the path of strengthening the autocracy.

In recent months, the Alliance the PDM and psrm has increased the pressure on his Pro-European opponents, after it was deliberately ignored recommendations of the Venice Commission and changed the electoral system. The EPP and the ALDE strongly condemned the use of selective justice, to silence opposition, as it happened in the case of mayor (mayor — approx. ed.) of Chisinau, Dorin Chirtoaca, Vice — President of the Liberal party, part of the ALDE”, — said in a statement.

The leadership of the European parties drew attention to the serious deterioration of the situation with media freedom, and also notes the evidence of abuse of state institutions, and pressure on civil society.

“The Moldovan authorities in the face of plotnitskogo of the Alliance the PDM / psrm threaten the achievement of citizens of Moldova in recent years, leading the country away from leadership in the framework of the “Eastern partnership”, — stated in the joint statement of the EPP and ALDE.

In this regard, the leaders of the two largest European parties appealed to the foreign Ministry, the EU and Council of Europe urgently to assess the deterioration of the situation in the sphere of justice and democratic standards in Moldova. In addition, the party demanded “the cessation of any funding from the EU, using the most stringent conditions for any future financial aid, and the early revision of the Association Agreement with the EU.”

The visa regime between Moldova and Evrosousom was cancelled in April 2014 after the EU declared Moldova a leader among the Eastern partnership countries. At the same time, and commenced the final preparations for the signature of the Association Agreement of Moldova with the European Union in June 2014.

In parallel with the implementation of the commitments related to the liberalization of the visa regime, Moldova has committed itself to comply strictly with the provisions of the Association Agreement with the European Union.