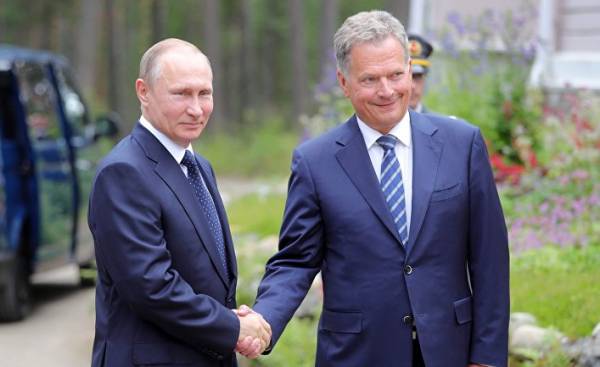 When the President speaks to the press, his main audience become the citizens of his country who sit at home in front of television and who have the right to vote in the next election.

The President of Russia Vladimir Putin — the master of public speaking, however, Sauli Niinisto (Sauli Niinistö) is not far behind. It was revealed during the press conference, Putin and Niinisto in Punkaharju.

Niinistö stressed several times the importance of open dialogue and twice during the conversation with journalists successfully showed their best side — as harsh Finnish guy from Western Finland. Niinistö made it clear where Finland considers himself in this world: it is part of the West.

Niinistö started to accents, in answer to the question of the Finnish Yleisradio, which concerned joint exercises of Russia and China in the Baltic sea: Russia wants to demonstrate these teachings to the world, and what did you think about Finland?

Yes, sounds scary: Russia and China are fighting in the Baltic sea, side by side. In reality it is not so dramatic. Chinese destroyer “Hefei” and the frigate “Yuncheng” going now to St. Petersburg. They should anchor at the Vasilyevsky island and take part in celebrating of Day of Navy Fleet of Russia.

Day of the Navy celebrated on the last Sunday of July — in accordance with the decree of Putin in 2006. So he returned to the Soviet holiday, but its roots go deeper — namely, back to sea since the battle of Gangut of 1714 during the great Northern war, when Russia fought with Sweden. The battle North-West of the Peninsula of Hanko was the first successful battle for the Navy, founded by Peter I.

After the celebrations of the Chinese ships will conduct a four-day exercises with the Russians in the Baltic sea. Such joint exercises of Russia and China conducted over the last several years.

“I assure you, it is not saber rattling, is the restoration, the revival of tradition, which for over 100 years,” said Putin and invited all to the parade fleet next Sunday.

“Finland also takes part in military exercises in the Baltic region, — said Niinistö. — We will participate in a big exercise “Aurora” near the coast of Sweden, there are mainly, of course, will force Sweden but will involve other countries, including the United States of America. The purpose of the exercise “Aurora” also is not saber rattling or the formation of any blocks against somebody.”

Niinistö has once again proved itself when a journalist for state news channel Rossiya asked about the new anti-sanctions, the preparation of which is engaged by the U.S. Congress. This question was quite long and a bit provocative. The journalist wanted to know whether the United States violate international laws by interfering in the legislation of the countries-EU members.

Putin agreed with the journalist and recalled that talked about this back in 2007 at a Conference on security issues in Munich. United States, according to Putin, thus ensuring their own economic interests at the expense of their allies. The attitude of other countries, according to Putin, depends on the “degree of their sovereignty and willingness to protect their own national interests.”

Niinistö, however, decided to improve the Russian journalist, in his opinion, is not about sanctions or the compliance with the laws of the United States, and the “doubts about the electoral process in the United States.” In other words, suspicions that Russia was trying to influence the outcome of the US presidential election is not the most honest way.

Putin and Niinistö is a very different policy, but they have a lot in common. They represent the same post-war generation, both received a law degree.

Niinistö at the end of may announced that he will run for a second term. Elections in Russia will fall at the same time, but Putin has not yet made any statements. Both are in great support of their constituents.

In the narrow circle of the President there is no reason to use a figurative expression. They call a spade a spade. The relations of Finland and Russia seem to be very good when the most interesting questions relate to China and the United States.