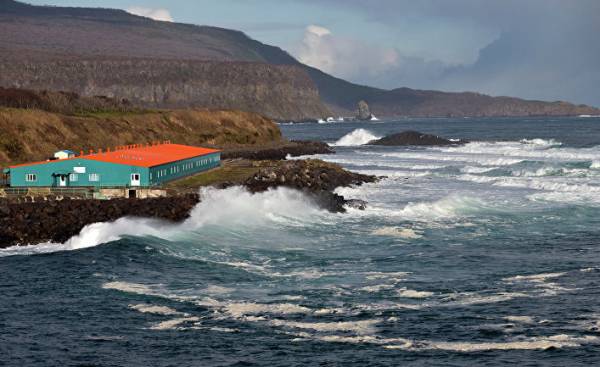 I visited the graves of Japanese on Kunashir and Iturup, lit a candle and prayed for them. Before our group went to the Islands under the visa waiver program, the Russians mowed the grass at the cemetery.

Japanese grave surrounded by graves of Russian, some fenced, some not. Grave photos beautifully decorated with flowers, but also a lot of graves, overgrown with grass. May family are buried not only the Japanese but also the Russians no longer live on the Islands. In 1994 there was a strong earthquake. Saying that while many Russians moved to the mainland. As I learned in disrepair are not only the graves of Japanese.

It seems that it is not exactly known and unknown, who is buried in the Japanese graves and live their family. Former residents of the Islands told me that during the evacuation, many died before reaching Hokkaido.

I was worried, not knowing whether to photograph the graves, however, former residents of the Islands were happy to see these cards, to see the current state of the graves. They thanked us for what our group visited the cemetery. Good thing I still took these pictures.

Given that the tombs are in a place that is not so easy to visit, I thought it would be better if I will report as much information as possible about the situation around the Japanese graves.

To the cemetery in Yuzhno-Kurilsk paved asphalt road, so we had agreed with the Russians on the transport. To the place we went on several cars. Meanwhile, to many Japanese graves are no roads.

On Iturup, we visited the cemetery located in the largest city of the island — Kurilsk. And here in advance of mowed grass.

In Kurilsk all members of the group, consisting of 58 persons, read the Sutra of Mr. ito, who lived on the island of Iturup to the second year of high school, lit candles and prayed for those buried in this cemetery. The cemetery is located on a hill overlooking the sea. Up to the top of the hill around the graves of the Japanese are Russian graves.

First visit to graves in the Northern territories under the effective control of Russia after the Second world war, took place in 1964, thanks to the efforts of the Japanese government. Subsequently, trips are sometimes cancelled due to various political factors. However, have visited 52 of the cemetery. Details can be found on the official website of the administration of Hokkaido in the Internet.

On the ship the results of their research shared with me Mr. Usuda who lived on the Northern Islands. On the graves in deserted places come the bears, so the Japanese go there together with the Russian hunters. Mr. Usuda, which has been on the Islands more than 20 times, had to deal with bears.

In a photo taken during the investigation of the graves, we see him with grave sign. It is noteworthy that around there are no roads, and the graves of many. According to Mr. Usuda, there were occasions when he had to get to the place on the road in a truck.

Sometimes the road passed along a very hilly terrain with steep descents and climbs. Former residents of the Islands communicate with each other, share memories and explore the graves, one after another, passing through severe hardship and mental anguish. When you think about it, you are overwhelmed with different feelings.

Mr. Usuda, who heads the office of the Association of the Kuril Islands in the city Bazouki, was born on the island Green. He now lives in the city Bazouki, it’s near my hometown Sibeco. I had met him in January of this year, when he visited the town of Nemuro in the composition of the parliamentary Commission. He is a member of the movement for the return of “Northern territories”.

He told me many interesting stories. Thank you very much!

On the last day of the trip we took pictures with him in the background of Kunashir.

During a meeting with Prime Minister Abe in December last year, President Putin declared that will make it easier to visit the graves for former residents of the Islands for humanitarian reasons, but this still has not happened. I think there are serious problems, such as weather conditions and the difficulty of communication with the Russian side. For my part, I would like to do everything possible so that this promise was fulfilled as soon as possible, as all former residents of the island are already very elderly.

Next time talk about the kitchen and the other sites of Kunashir.

Turn off the heating and take the day off: weatherman predicts warming in Ukraine