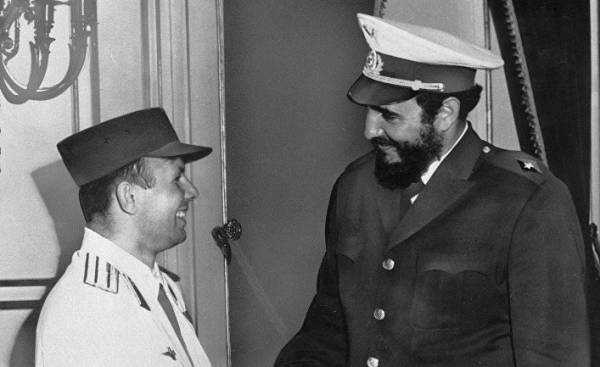 56 years ago, July 24, 1961, the leader of the Cuban revolution, Fidel Castro RUz, met in the international airport named after Jose Marti, citizen of the USSR Yuri Gagarin, the first committed space flight 12 April 1961. Two days later, during the celebrations on the occasion of the eighth anniversary of the storming of the Moncada barracks Fidel gave a speech at the Revolution Square in Havana, in which he mentioned his high-ranking guest.

“Because our memory is clearly etched these two events, and in those same days, our people heroically fought and defeated the mercenaries landed, it will be more than fair to reward the first order “Playa Giron” the world’s first cosmonaut major Yuri Gagarin, in our memory of these two events forever remained associated with each other.

The revolutionary government established this award to give it to those who have made a significant contribution to peace, development of science, the struggle against colonialism and imperialism. Let our memory of these two heroic events, two great achievements for peace in the world will always be linked to each other”.

“Something to me today throat is a bit wrong. I told Gagarin that while I do my speech, he would twice around the world. He told me that so far made only half a revolution around the Earth. So what’s left for me round the floor to finish the statement, but my throat today is not in the best shape”.