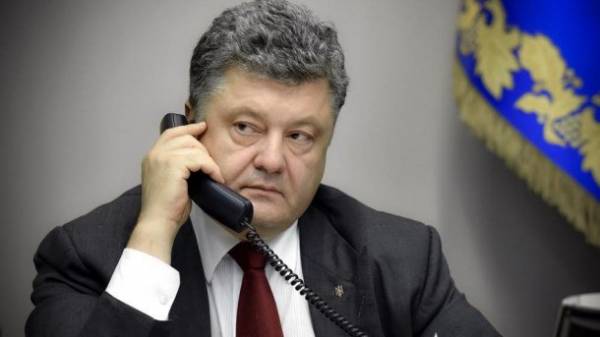 The President of Ukraine Petro Poroshenko has held a phone conversation with his counterparts from France, Germany, Russia and Chancellor of Germany concerning the settlement of the situation in Donbas, the press service of the head of state.

The negotiators first heard the report of the Chairman of the OSCE SMM in Ukraine Ertugrul Apakan and his Deputy Alexander hug.

Poroshenko has called the last days of July one of the bloodiest in 2017, and urged Russia to immediately stop aggressive actions and the supply of weapons to the occupied territories.

Read also: Poroshenko: Russia is a blatant and cynical aggressor

The interlocutors agreed that in the Donbass need to install a full cessation of hostilities and to withdraw heavy weapons under the supervision of the OSCE. The President of Ukraine also pointed out the importance of the introduction in the Donbass UN peacekeeping mission.

The Ukrainian President also stressed once again that the release of the hostages blocking the Russian side: Ukraine insists on the immediate release of all hostages, including those illegally held in Russia, in particular Oleg Sentsov and Roman Sushchenko.

During a two-hour conversation, an agreement was reached to coordinate the final steps for security and to continue work on roadmap of implementation of the Minsk agreements. To this end, in the second half of August, a meeting of foreign policy advisers to heads of state “channel format”.

Previously Poroshenko said that the main argument of Moscow in the negotiations on the Donbass – the possible recognition of so-called “DNR” and “LNR” on the Abkhazian scenario.