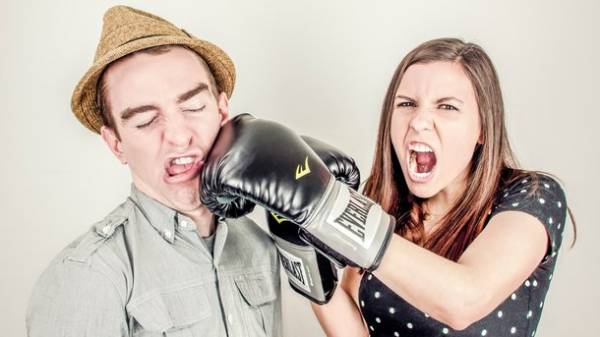 Frequent family quarrels occur because of the difference in male and female psychology. To forestall the woman as the “soul” of the family, it is worth considering the logic of her husband, says Tatiana Mikheenko, a psychologist of the highest category.

TYPICAL SITUATION. Husband methodically digging in the car and angry at his wife, who asks “drop everything and walk the dog, he could hardly tolerate”. The wife while preparing dinner, checks lessons my son, washing dishes and making pancakes — why waste time? So, while cooking the broth, you can devote time to his son; while the son is busy with tasks, it is possible to bake pancakes; and until the pancake is baked — to clean the plate.

WHY THE DISPUTE IS DOOMED. Men in the brain dominates the left hemisphere. It is responsible for concentration, methodical and meticulous sequence. Women often dominated by the right hemisphere is associated with creativity, versatility and creative approach to any issue.

HOW TO AVOID IT. Don’t expect husband is the same multi-tasking, do not appeal to his conscience and not to recall him, such “laziness” in the past. Just voice your ideas, requests and orders in stages and not all at once.

TYPICAL SITUATION. Husband never takes out the garbage, washing the floors, not watering the flowers. He is “dependent”, “slacker” and the list goes on unflattering labels. Her husband, of course, begins to snap, to remind his wife of her “sins” in the form of dust on the shelves or the same flowers that are withered her fault, “it’s your flowers, what I need to remember?!”.

WHY THE DISPUTE IS DOOMED. Although, according to the international organization for the fight against poverty, Oxfam, 36% of global gross domestic product is unaccounted women’s work, men’s not to love: male nature is the role of a winner, innovator, and leader. Because most men shrink from small household chores: what a victory, what is the significance of what you washed the floor, and after half a day to wash it again?

HOW TO AVOID IT. Distribute household Affairs so that her husband was carrying out a large, and rushed me and did not disappear. For example, during a General cleaning wipe the glass on the Windows or mirrors, buy a new interior light or pass all “spotted” things to the dry cleaners.

TYPICAL SITUATION. “I saw the shirt for you. Striped, blue, and buttons are cast. To buy?”. In the best case, the husband will fight that did not understand. At worst tell you to wear the most.

WHY THE DISPUTE IS DOOMED. Men useless to ask about something they see or feel: creative thinking is a female characteristic.

HOW TO AVOID IT. Their ideas wife must show the subject in reality. And not “like that shirt”, and “one to one”.

TYPICAL SITUATION. Wife hammer: Mikey put on the bottom shelf and the shoes — not on a white rug at the entrance and the next!

WHY THE DISPUTE IS DOOMED. In men, the procedure is convenient, and women — beautiful, even if uncomfortable.

HOW TO AVOID IT. Ask the husband “beauty”, which would be “comfortable”. But articulate your vision not as a solution: the power of man’s nature it will cause anger and unwillingness to compromise.

TYPICAL SITUATION. Wife on the road to the SEC: “Go to the right, to the Church, where was married Ivanov. Then left there, the house is blue, like the jacket that I gave Kuma. Continue straight”.

WHY THE DISPUTE IS DOOMED. Men clear detail only the case.

HOW TO AVOID IT. Taboo lyrics and scream: “What?!”.

TYPICAL SITUATION. Wife got what she always prepares the first, second and compote regardless of the contents of the refrigerator. “And anyway, when the time will come that bother you?! I also work!”.

WHY THE DISPUTE IS DOOMED. Cooking is always creativity: from disparate taste, shape and colour components, get something solid, even if the set of products is limited and one day-to-day. A creative nature is by definition most women.

HOW TO AVOID IT. That routine does not lay only on the shoulders of women, offer your husband to clean or to wash vegetables, cut meat or bread. When you do this, strike up a conversation about the day’s spouse — your compassion will prevent the sticking of the husband in the tablet.

TYPICAL SITUATION. Husband did not think to pick up in store favorite chocolate wife. And milk is not purchased! What is the problem, “to put a tick in stupid brains that we need it always!” and “do you hear me never”.

WHY THE DISPUTE IS DOOMED. Spontaneity and fantasy — a creative approach to the routine with which the representatives of the stronger sex tight.

HOW TO AVOID IT. Sadly for most women, but “surprises” need to be ordered. However, if you do not care what kind of dessert my husband you will buy, then you should not say: “Buy fruit cake”. Husband will buy the first one that caught his eye with the word “fruit” on the box. Because narrow request. The procurement list is to give the husband in writing: keep a list in my head the logic of men is a waste of energy.

TYPICAL SITUATION. Husband absorbed by watching the news in social networks. A wife who is currently doing an audit in the closet and looks with one eye the series (and thus can repeat every line the characters), proposes to discuss with my husband what gift they will make to the class teacher of the year.

The husband is irritated, distracted, and annoyed wife, going to cry or hurt puffing out his lips, snorts: “Well, okay. As always you spit on the son.”

WHY THE DISPUTE IS DOOMED. According to historians, that Julius Caesar could simultaneously read a text and to dictate the other. But this is a rare exception. The fact that the speed of neural connections between the hemispheres of the brain in men is low. And to switch attention from one issue to another, he needs much more time than her, in women this rate is not even measured in seconds and fractions.

HOW TO AVOID IT. If the question, that is, not life and death, we should wait until the husband was released. And no matter what “stuff” he’s busy right now. Because the logic of the men business, which he occupied at the moment, more serious, bigger and more important than any other.