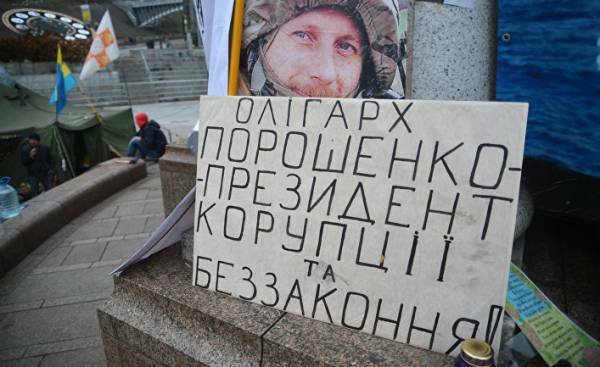 Imagine that on June 14, Ukraine launched its first independent anti-corruption court that would have started to review dozens of cases against various senior officials.

Imagine that by mid-July a few oligarchs and officials were convicted of corruption, and their property confiscated.

Unfortunately, both the previous sentence is not true. On June 14, the IMF established a deadline for the creation of an anti-corruption court, which Ukraine was ignored. Instead, the President Petro Poroshenko and others shy away from it as I can, trying to avoid reforms before the next election.

That in turn threatens them with loss possibilities. Anti-corruption court would demonstrate the rule of law in Ukraine. The IMF sent to Kiev 1 billion and the European Union is 600 million euros.

In addition, this court would enhance the confidence of foreign investors, who would invest money in helping to rebuild the Ukrainian economy.

The rule of law also would force the oligarchs, their collaborators, the victims and the officials of the werewolves to make a deal with the investigation, presenting new evidence of the crimes committed. This would clean the system and led to an increase in tax payments and income from seizure.

But such a scenario looks unrealistic. Instead, the oligarchs decided to tighten reforms, pursuing anti-corruption activists and trying to manipulate the EU.

Last week, for example, the President of the European Commission Jean-Claude Juncker became the author of a diplomatic mistake, saying that Poroshenko has convinced him of the feasibility of establishing an anti-corruption chamber, not an independent court. Since then, he had to return to the former position, but doubts remained.

The existing judicial system is clearly rotten, and it is obvious that the same outcome would have expected the anti-corruption chamber. As of July over the past few months, the National anti-corruption Bureau of Ukraine passed in the courts, 75 cases, but considered only 18 of them: mainly deals with the investigation on the guilty plea, associated with minor corruption schemes. No senior official convicted.

“The conviction of NABOO, the anti-corruption chamber [mentioned by Juncker] will not only fail, but will make the system even worse,” — said in a press release.

So, it’s the same old game continues. There are even assumptions that the environment Poroshenko decided to abandon the $1 billion dollars from the IMF, and partly because they can still count on the promised EU 600 million euros.

But the international community must take a tough stance right now. Without serious coercion, offenders will continue to thrive and will be able to deceive the voters.

That’s what is necessary to make international organizations:

1. The IMF should not give a penny until, until you earn the anti-corruption court. You can also consider penalties for failure to comply.

2. The European Union should not give any cents until, until will not be created anti-corruption court.

3. The EU should set a deadline for the creation of an anti-corruption court and to punish Kiev suspending the declared program of liberalization of the visa regime. “For this there are appropriate mechanisms, — said the European activist for the fight against corruption. And this will be the biggest carrot of all. No money and no bezveze”.

4. The IMF and the European Union should stop allowing myself to play and must act together.

5. The special representative of the USA in Ukraine Kurt Volker should require the establishment of an anti-corruption court before the granting of American aid, be it military aid or some other.

Meanwhile, anti-corruption police and prosecutors should be empowered that allows you to circumvent the situation of having the ability to offer great rewards to those who goes to their side. They should also offer Amnesty to those who voluntarily confess to offences and disclose their assets and incomes around the world over the past five years, paying taxes and interest for these five years.

Amnesty has helped to speed up the transformation of the former Soviet satellites after 1989. Several years ago I had a conversation with Vaclav Havel in Prague. After a spell in prison as an activist and after he became President, he abandoned the idea of the prison of the oppressors of the country.

“We need them. They know where the “keys”. Some of them are smart and know how to run the country, he said. — Revenge is not productive.”

This emphasizes the only winning strategy for Ukraine: external events and pressures in combination with the methods of education should compel the elite to do the right things.

“The oligarchs are pleased with Poroshenko and earn it more money than when [ousted President Viktor] Yanukovych,” — said in an interview with the MP and reformer Sergei Leshchenko. People are angry with corruption, but the government pays no attention to it, they just change the subject.”