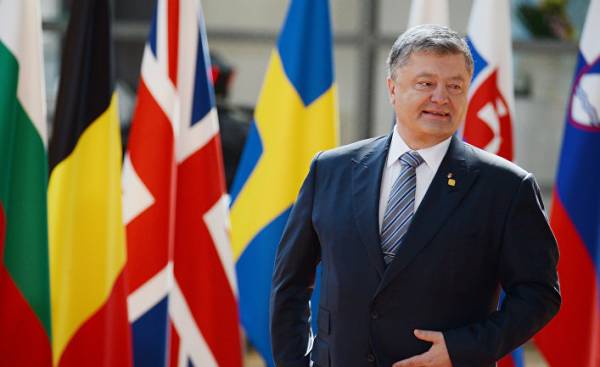 Language, social networks,… banks In the context of conflict with Moscow over the Donbas and Crimea, the Kiev authorities take all the new laws to reduce its historical influence. The population is not always in accordance with them.

“I had to intervene. Imagine these banks in Ukraine penetrated Putin’s money, undermining our war effort. I am proud that we managed to end this disgrace”. Dmitry — the activist of “National corps” of microparti ultranationalists of the volunteer battalion “Azov” (an organization banned in Russia — approx.ed.). Spring in Lviv they are teammates blocked the entrance to the Department of Sberbank, the largest of the working country Russian banks. His activity was stopped in mid-March after the government imposed sanctions against five Russian banks. Anyway, he doesnít have any faith in the Executive power of the President of Petro Poroshenko. “They and the war profiteers… they Have an interest in this conflict. So we needed to make sure we are not deceived. We were left in the Bank and explaining to people why the Ukraine should be banned all Russian”. Battalion “Azov” played an active role in the war with Pro-Russian rebels in the East of the country, but is known for his radical ultra-nationalist views and a minority on the political scene of the country. Anyway, his work fits within a much wider phenomenon of the rupture of relations with Russia.

According to many Ukrainians, it is justified on the basis of “Russian aggression”, the manifestations of which was the annexation of Crimea in 2014 and the conflict in the East that claimed over 10 thousand lives. Launched in February 2015 in Minsk the peace process has stalled. Petro Poroshenko has repeatedly asserted his intention to “return” the Peninsula and put an end to the war, however, the prospects for peace appear increasingly uncertain. On 18 July the self-proclaimed head of the Donetsk national Republic Alexander Zakharchenko has again rejected the possibility of returning to the Ukraine and announced the formation of “the Ukraine”. The majority of Ukrainians believe that behind all these events, is exacerbating tensions, the Kremlin.

In response, steps are taken to further the breakup of the once closely related countries stop direct air service, trade embargoes, energy disputes, retaliatory financial measures, the prohibition of Russian and Russian-language media. Anyway, the January sanctions against “Rain”, one of the last of the Russian opposition channels, has caused confusion.

For the most part, these measures cause dissatisfaction of a significant part of the population. In particular, it emerged after the may 16 signed a presidential decree banning the popular social networks “Vkontakte” (12 million users in the Ukraine) and “Classmates”, search engine “Yandex” and mail service Mail.ru. In total, the sanctions list was added 468 companies, and 1 thousand 228 people. The decision generated a storm of criticism: Poroshenko accused that it creates far more problems for Ukrainian users than for Russian companies, and also limits freedom of speech. Alexander Olshansky of Internet Invest Group said the decision is an acknowledgement of failure, “surrender”: “the Information war is the struggle for hearts and minds. It does not defeat the ban”.

For the authorities in the first place are matters of national security. The fact that these enterprises are led by the entourage of Vladimir Putin, who cooperate with the Russian special services. Thus, according to the published in the January survey, 43% of Ukrainians agreed to restrict access to the network for reasons of national security, and 35% opposed. As stated in the message of security Service of Ukraine, held on 29 may, the searches in the Kiev office of “Yandex” has confirmed that the company conducted “illegal collection, storage and transfer of personal data of Ukrainian users.” “Yandex” was accused of “betrayal”. Anyway, this search was not an argument in favor of government bans, but only gave rise to new suspicions. Expert on media Sergey Raczynski believes that the purpose of the operation of the SBU was to make the population accept presidential decree. The President of the International center for combating cybercrime Alex Komar, in turn, recalls that the collection and storage of data of users engaged in all search engines. That is, to blame the name “Yandex” was unjustified.

In addition, the government is accused of selective approach to the protection of national security. Russian singer Yulia Samoylova, who was supposed to participate in the held in Kiev in may the Eurovision song contest, was not allowed into the country due to the fact that she held concerts in the annexed Crimea. But it was later revealed that the Peninsula was made by the representative of Bulgaria, but his address no sanctions had been taken. American actor Steven Seagal has also become persona non grata in Ukraine until 2022. He certainly did not hide his admiration for Vladimir Putin, but hardly represents a “threat” to national security.

Let there not be traced direct communication, the rejection of Russia is accompanied by other phenomena such as approved in 2015 “decommunization”: the preservation of the Soviet legacy was perceived by many as a drain on national sovereignty. The same applies to running at full speed “Ukrainization” of public life. So, adopted in may the law obliges the national television and radio stations to produce 75% of the programs in the Ukrainian language. For regional channels, the quota is 50%. These measures are designed to enhance the development of culture in Ukrainian. They mean the restriction of the use of the Russian language in the public space.

Considered in the country and other bills that require deep “Ukrainization” of social life: compulsory subtitles, language patrols with the right to prescribe penalties… Such proposals are consistent with “current practices in many European countries,” said the Deputy “Self-help” and one of the authors of the bill Irina Podolyak. Anyway, in this bilingual country, such proposals are not to everyone’s liking. Some use them to shake the dust off of old stereotypes: the split in the Russian-speaking East and Ukrainian-speaking West, the danger of authoritarian abuse of such requirements. Some warn that the Russian-speaking population to take up arms to Kiev.

“All this dust in the eyes — not without cynicism says the poet Serhiy Zhadan. — Every time the government gets bogged down in problems and is unable to cope with the economic and social difficulties of the country, it again raises the language question”. The initiative can even be counterproductive in the sense that “people cannot be forced to love the language” — says the Director of the Fund democratic initiatives Irina Bekeshkina. According to her, the number of citizens using the Ukrainian language in the family circle, grew from 37% in 1992 to 42% in 2016, while the number of people willing to give the Russian language official status has decreased from 51% in 1996 to 33% in 2016.

According to the philosopher Serhiy Datsyuk, the language issue reflects the uncertainty of the Ukrainian society in the face of the demands of nationalist organizations. All of them, as, for example, the battalion “Azov”, gives legitimacy to their role in the revolution and war. They promote the rejection of Russia and the Russian language. The idea of “revenge, suspicion and hatred of the Russian and Russian-speaking” are making their way in the public space. This is despite the active support of Russian-speaking Ukrainians to a national struggle, including the armed forces. Odessa artist Alexander Roitburd believes that current trends undermine the bilingual potential of Ukraine. “Putin’s aggression has made us stronger and freer, he says. — We have the capacity to publish free of Russian culture”. Of course, if they succeed to avoid blindness, which is pushing to “ban that ban is not possible”.