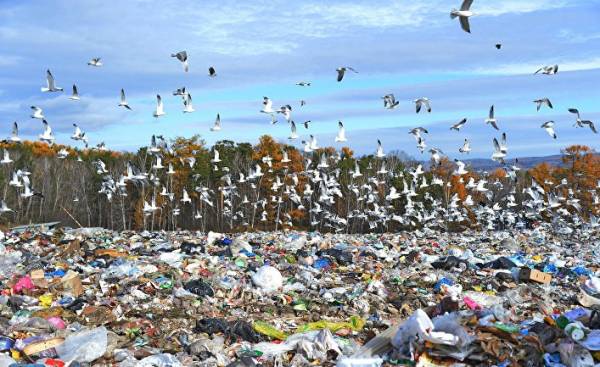 Seagull — a symbol of Chekhov near Moscow, where the famous playwright spent seven years of his life and even wrote the play. It was here, in this famous for its natural region, the writer has built two of the sanatorium. However for several years these birds hovering around the landfill near the village Manushkino, which poisons the air for miles around. Near the local administration building stands a huge mountain of garbage that occupied the territory of 14 hectares and was ironically nicknamed the “pearl” of the region.

In fact, it is rather festering sore, from which a handful of activists over the past five years, seeks to rid the neighborhood hoping to drink, finally, pure water and breathe fresh air. More than a month ago, six of them went on hunger strike. Of their shares the inscription in large white letters on the sides parked at the entrance to the village a military truck, which turns sleeping two people. One of the dusty mattresses is the icon of Saint Nicholas, but their thoughts turn to the Kremlin, not the sky. “Vladimir Putin — as beloved king. As soon as he heard about us, so ordered to close the landfill,” says one of the activists of Oleg Samsonov. The regional authorities promised to desist in 2018, but the locals are not going to believe the officials. For them what matters is the word of the President. And they can understand.

During the June 15 annual “Direct line” to Putin appealed and angry residents of Balashikha near Moscow, who are also victims of the piles of garbage. A week later they signed a presidential decree: dump in Balashikha stops. Viewers applauded the head of state, not realizing that their Royal grace opened a Pandora’s box.

Moscow and the suburbs learned that keep on their site 20% of total waste in the country, footprint, according to estimates by Greenpeace, is 4 million hectares (almost Switzerland). Under pressure of urbanization in the Moscow suburbs going every year 11 million tons of garbage from the capital on 18 landfills. Moreover, 8 tons of this amount are not even declared, says the former Deputy head of Rosprirodnadzor Oleg Mitvol. Of the personality of their owners, often hidden behind the curtain of offshore companies. The question invariably waste of public concern: according to a recent survey by the Levada center, in collaboration with the world wildlife Fund 90% of Russians consider waste disposal a major environmental problem of the country, and only 4% believe in the ability of the state to solve it.

Giving the order to close the landfill in Balashikha, President (in 2018 he will likely qualify for a fourth mandate) began the game of musical chairs and opened the way for the protests. So, inhabitants located 12 kilometers South of Lyubertsy began to notice the increasing number of cars have their own landfill. “After Putin made this decision, the waste from the heading began to drive to us”, — said Artem Lukonin. July 9 the first time he was able to assemble several hundred people for an environmental demonstration.

Some activists even went to the junkyard to try to block the way of the trucks. They need to immediately close it, but I suspect that the hated regional authorities want to create and close a new landfill with an area of 100 hectares. They even thought about how to send a letter to Putin, threatening not to vote for him in 2018, but eventually abandoned this initiative because it considered it too radical. “We hope that eventually we are heard,” says Artem Lukonin.

In Chekhov their fellow sufferers ready to go on. Three months before the recent “Straight line” with the President (it is worth noting that 2017 was officially named the year of ecology in Russia) involved with television for the preparation of the report. Then all cooperation suddenly stopped. The leader of the movement Nikolay Dizhur believes that to understand the reasons of removing from the air. “Putin simply couldn’t show staged a hunger strike of the people, — said the Deputy of municipal meeting. — Dump in Balashikha was more presentable to the Kremlin.” After the failure with media, the situation has only worsened.

The next day after the program aired 68-year-old pensioner Olga Churikova went to the station to give a newspaper its a small movement “Down”. There she at once took the arm by police. “For kicks I threw in the car like an alcoholic, she says. — When we arrived at the office, the chief called an ambulance to give me an electrocardiogram. Eventually I landed in a psychiatric hospital”. She remained there under observation all weekend: “a police officer told the doctor that I had suicidal tendencies. He laughed too”.

Recently in the camp staged a hunger strike of people brought pizza from an unnamed customer. The incident scene was captured is unknown.

Following the rules of the relationship between Vladimir Putin and subordinates, Nikolay Dizhur, the Kremlin brought to the office a letter with the complaints of local residents and a request to close the landfill in Manushkino. “I bad met. I took the official stated that in the course of the problem. I can’t be so disrespectful employee behavior, which speaks on behalf of the President.”

Anyway, in the village there is no consensus about the influence of Vladimir Putin. “He doesn’t know how much they have violated our rights: before I get to it, the information passes through many filters”, — thinks Oleg Samsonov. “Actually, he doesn’t care about us, me and my children, whose lungs and allergies, no one Here voted for MPs, but this does not prevent their election. We fight like don Quixote against windmills”, — Olga sighs Dolce. She feels deceived. She moved here 20 years ago, when everything is immersed in the greenery. The neighborhood was then called “little Switzerland”. There were berries and mushrooms, it was possible to drink spring water. Now the only source of oozing rotten water, which pollutes the local river.

“It was conducted ecological expert examination, which confirmed compliance with sanitary norms”, — is justified by the Deputy Director of the management company Roman Kovalenko. The company was created in 2015, he has the only customer in the face of the landfill in Manushkino, and its owners are unknown. The Directorate is concerned that, in 2018, the contract will be terminated, and hopes that the government will charge him with the restoration work. In Chekhov’s administration, we in turn refused to interview and only confirmed the plans to close the landfill. What’s next — is not clear. According to Greenpeace, is now in working condition is just one of three suburban incinerators. The planned construction of four more, but the people oppose it because, as in Manushkino, dissatisfied with the low level of technology objects. “You only have to put them on red square” — ironically Nikolay Dizhur. Attempts to parse and recycle waste are rarely found, but customers of Moscow grocery stores send to landfill, mountains of packages. Meanwhile the mayor of Moscow resigned, and the school Manushkino, which is just 400 metres from the stinking dump, changed the Windows.