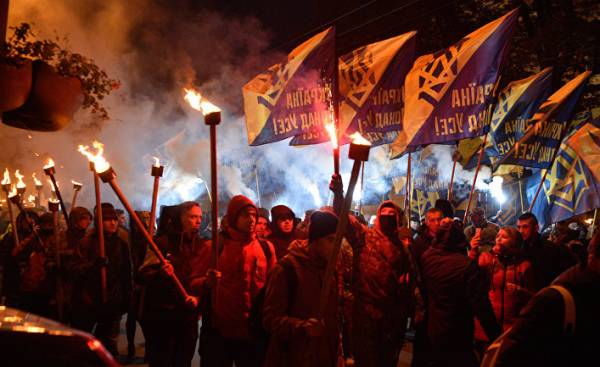 A few people — most of them, apparently, seniors wait patiently for the start of the film Bureau of the Socialist party. Suddenly the building in Kiev’s Grushevsky street in front of Parliament, burst two dozen young people. “We are here to implement the law on de-communization,” said the leader.

Uninvited guests — some wearing masks — are members of the “National body”, and they immediately go to the point: they tear from the wall a red banner with the portraits of slain Russian nationalists Russian anti-fascist Stanislav Markelov and Anastasia Baburova. In a bookcase they found nothing that would have attracted their attention. Then the mobile phone calls of the leader — obviously the order to withdraw.

Only after the men had shut the door behind him, the visitors come to life. One rushes to the phone and calls the police, who soon receives a message about the violation of public order. “But I can assure you that this matter will be hushed up,” says one policewoman.

The trick of right-wing youth in the Bureau of the Socialist party is not a singular case. If this day they are scared of older moviegoers with reference to adopted in 2015, the law that bans the Communist symbols at the beginning of June, they caused consternation among the participants in one trial. That day the “national body” stormed the courtroom during the trial of a conscientious objector from military service Ruslan Conaboy shouting “Glory to Ukraine — death to enemies”. For security purposes, Kotabe had to leave the building through the back door.

With their yellow-blue flags, these young activists of the “National corpus” is already inseparable from social life in Ukraine. This organization sees itself as the civilian wing of the right-wing volunteer battalion “Azov”. Its commander Andriy Biletsky refers to the role models of the 40-ies of Roman Shukhevych, many years commander of the Ukrainian insurgent army, the Ukrainian insurgent army (banned in Russia — approx. transl.), and Stepan Bandera, leader of organization of Ukrainian Nationalists, the OUN (banned in Russia — approx. transl.).

Today they willingly turn a blind eye to the fact, says Director of the Ukrainian Jewish Committee Eduard Dolinsky in an interview with the New York Times, that the OUN was xenophobic, anti-Semitic ideology. As the OUN and UPA units took part in the Holocaust, they killed at least 70 thousand poles, and maybe there were a hundred thousand. After the annexation of Crimea in 2014, the battalion “Azov” was one of the first units of volunteers who fought in Eastern Ukraine. The reconquest of the port city of Mariupol out of the hands of the rebels in the summer of 2014 was primarily due to him.

Amnesty International and Human Rights Watch accused the battalion, which as of November 2014 included in the national guard, in serious human rights violations, in particular torture. Organization “Patriots of Ukraine”, which is also headed by the commander of Azov Biletsky, in 2008, distributed in the city of Kharkov Hitler’s book “Mein Kampf”, said the Director of “Kharkiv human rights group,” Yevgeny Zakharov.

Almost no support in the community

For Biletsky it is not so much about the language or the understanding of the state as ethnic origin, which distinguishes a true Ukrainian, according to an expert on right-wing extremism Vyacheslav Likhachev.

“National corpus”, which has according to own data 15 thousand members, participated in organizing the blockade of the Crimea, blew up a press conference of the head of the banned Communist party of Petro Symonenko attacked alleged left-wing radicals in Lviv, disrupted the meeting of the city Council of Lviv and blew up the concert singer Svetlana Crap in Odessa. She is credited with frequent performances in Russia.

“National corpus” also distinguished himself during the siege last winter “Luhansk people’s Republic”. According to the expert on right-wing extremism Likhachev, as a result of his participation in the fighting at the front these people have credibility in the society in which they have given themselves the right to disrupt the event and to thwart them. However, while right-wing radicals are pushing the state and the government, imposing its own laws of action, it is unclear what all this thinking people. “They have almost no support in society,” — says Eugene Zakharov of the “Kharkiv human rights group”.

Poor results in elections, but a big impact

The results of the elections confirmed his words. The former head of “Right sector” (an extremist organization banned in Russia — approx. transl.) Dmitry Yarosh has been for the presidential elections in 2014 only 1%, and the right-wing freedom Party, which received in 2012 more than 10%, during the last elections did not overcome the five percent barrier.

Only Andriy Biletsky, commander of the right-wing units “Azov”, managed to get on the 2014 parliamentary elections in Kiev Obolon district direct mandate.

Despite this, the right-wing radicals got to the highest posts of the state with their programs, and in recruiting personnel. The former head of the “Right sector” Dmitry Yarosh already in the beginning of 2015, was appointed Advisor to the Supreme commander of the Ukrainian troops. President Poroshenko has twice noted it in 2016 with high state awards.

And Vadim Troyan, a former Deputy commander of the volunteer battalion “Azov”, made together with the future commander of Azov Biletskiy on the Board of the “Patriots of Ukraine”, since February of this year, Deputy Minister of internal Affairs of the country. In one right-wing radicals and the government are the same: both those, and others follow the traditions of the Ukrainian nationalists 40 years. Permeates the glorification of the OUN and its military branch, the UPA through all the activities of the ruling politicians and right-wing radicals.

The head of the state Institute of national memory Vladimir vyatrovich of the opinion that should not be prohibited symbol for the 14th Grenadier division of the SS (also known as the SS division “Galicia”). Base: it is supposedly not about the symbol of the national socialist totalitarian regime. In fact, the “SS Galicia” was a Waffen SS division, which in 1943 was supplemented by volunteers and ethnic Germans.

Many supporters are not familiar with the right ideology

In September 2016, the President of Israel Reuven Rivlin (Reuven Rivlin) during your visit to memorial places of mass murders in Babi Yar accused the Ukrainian nationalists, especially the fighters of the OUN, aiding the murderers-the Nazis.

How great is the danger that comes today in the Ukraine from right-wing extremists? In this respect there are different points of view: wrong, when all supporters of the “Azov” are accused that they advocate a total imperialist nationalism — and this is only because they believe their samples of Bandera and Shukhevych, says, for example, Likhachev, who lives in Jerusalem publisher to release the book “From the Maidan to the right.”

Most of their supporters don’t even know this ideology. Many see, say, only the group that represents the will of Ukrainians to independence. “Right sector” made, say, in 2014 on independence vs integration in Europe. However, the opposite was achieved. Right not to ensure the implementation of their homophobic views. The country’s leadership and society clearly showed last year that even in spite of right-wing threats you can carry out in the city LGBT March.

Yevhen Zakharov, head of the “Kharkiv human rights group”, considers proper to tie right-wing radicals. He allegedly was against the inclusion of the battalion “Azov” in the state structure. But now he believes that it would have been nice: the only way to control them.

Nina Potarskaya of the Center for social and labor research, on the contrary sees in the aggressive speech of right-wing groups to lower the threshold of violence against the dissidents. This violence, as she believes it is being tacitly accepted by the police. Potarskaya: “a couple of years ago we couldn’t imagine that you can make illegal actions, knowing that you can’t get punished. On the contrary: the assumption that society even encourages this violence.”