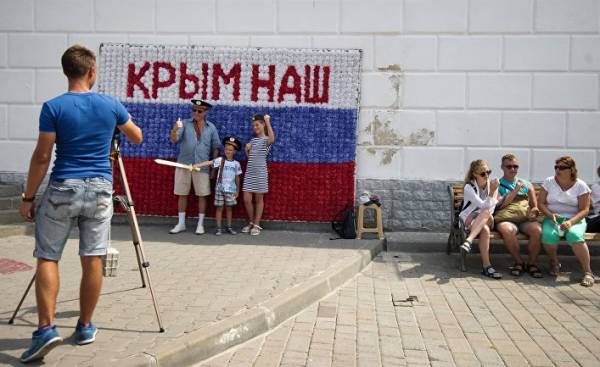 For Putin’s regime it is essential that as many people as possible to follow the call Nested in the last issue of Ny Tid — went to the promised land and allowed to be blinded and seduced. But behind the facade of “villages” things look different.

The expression “Potemkin village” came after the visit of the Russian Empress Catherine in 1778 in the conquered shortly before the Crimea. First lover, Prince Grigory Potemkin, according to the myth, had built a fake prosperous villages, to the conqueror had a good impression and to cover what was in reality: the corruption, oppression and poverty.

In the February issue of Ny Tid, history repeated itself. As a Builder of villages was made by Bjorn nistad (“Crimea is Russian”) and the couple of entrepreneurs Hendrick and Mette, Rosenlund as the visiting conquerors (“Seven days in the Crimea).

Putin’s “village” that promotes nistad, lies in the fact that “almost everyone in Crimea, including Crimean Tatars, support reunification with Russia, people look to the future with optimism.” Nistad urged Norwegian politicians and ordinary citizens to go to the occupied Crimea to your eyes to witness the “villages”. The couple, Rosenlund followed the call and enthusiastically talks about the weekly trip to the Crimea in the fall of 2016.

Academic degree Nested and the fact that he is the author of books, should guarantee that he is an objective observer of what is happening in Putin’s Russia. In fact, he is a partisan player, standing on the side of the Putin regime. He does not mention that these trips to the Crimea itself means the violation of Ukraine’s sovereignty and complicity in the occupation, contrary to international law. In his famous style nested reproduces conversations with scanty handful of supporters of the Russian occupation during a trip in the fall of 2015, while principled and powerful resistance to the occupation he ignores.

Nistad interviews “Crimean Tatar human rights activist” Vasvi Abduraimov has been that supports the Russian Supreme power. Abduraimov is headed by a Pro-Russian party “Milli Firka” — the “National party”. “Milli Firka” has the reputation of party of the Russian vassal and claim a place in the Crimean Tatar national Assembly, the Kurultai and the government Maltene prohibited in accordance with the Russian law on extremism from April 2016. Their initiatives against the legitimate leaders of the Crimean Tatar people in the media, in full compliance with Russian propaganda, Abduraimov helps the occupation regime to give the persecution of the Crimean Tatars and Pro-Ukrainian activists the appearance of legality. From the point of view of Crimean Tatars, it would be natural to compare the “Milli Firka” with our own “National unity” during the German occupation and Abduraimova is considered a Quisling. (Vidkun Abraham Quisling is a Norwegian politician and statesman, leader of the party “National unity”, a collaborator, a national socialist, actively collaborated with Germany during the Second world war, was Prime Minister during the German occupation of Norway. After the war was sentenced to death and executed. The name Quisling has become synonymous and is used as a synonym to the words of a collaborator, a traitor — approx. ed.).

World Congress of Crimean Tatars counted in the summer of 2016, nine killed, 15 kidnapped, and 23 of those arrested as political prisoners after the Russian intervention in February and March 2014. The situation has intensified in autumn and winter. Now large units of armed soldiers in masks regularly held in the Crimea of raids against the homes and families of the Crimean Tatar activists without any reason. During the fall of 2016, the regime arrested lawyers of the detainees. The last step is to mass arrests of neighbors and friends who came to Express their solidarity with the victims of raids and arrests. The Crimean Tatar TV channel ATR was closed in Crimea in April 2015, he was deprived of the opportunity to cover such a situation. However, some information still leaks to the network — thanks to modern mobile communication technologies and the Internet.

Resistance to the occupation

The American center of studying of public opinion the Pew Research Centre — the same “village” in the journey, in which nistad involved. The staff drove through the Crimea in the weeks that followed, however, as 30 thousand armed Russian soldiers in masks and unmarked completely terrorized the population, and found out how innocent people come to the referendum and annexation by Russia. Nistad may cause the study results as documentary evidence of the fact that the referendum and Russia’s annexation ostensibly, match what thinks the population of the Peninsula: 91 percent of respondents in the Crimea was considered a referendum on March 16, 2014 legitimate, and 88% believed that the government in Kyiv ought to recognize.

Nested ignores investigative journalism journalist “Aftenposten” Christian Pen Ola (Per Kristian Aale), award-winning, about how the manipulation of votes and a gross political fraud was the basis of the decisions adopted by the Parliament in Simferopol, on the referendum. Moreover, the plebiscite was not a legitimate basis — as according to Ukrainian laws and international law. Immediately after the referendum, the Supreme court of Ukraine ruled it unconstitutional. It creates an unacceptable international precedent: that random the majority of the population may at any time decide to which state it wished to belong.

The referendum was illegitimate, besides, was not present an independent international observers. However, there were many reports about large-scale violations of arbitrary lists, which vote could Russian who came to the Crimea, but not living there permanently, the organized transportation of groups of voters from one polling station to another. The fact that the area of Sevastopol part in the elections took 123%, speaks for itself.

There is every reason to ask: was the background for the free formation of opinion, when the Crimean Peninsula was carried out by the American poll. The result reflects the impact of a massive propaganda pressure in connection with the so-called referendum in conjunction with the presence of Russian armed soldiers in masks, as well as a number of cases the use of violence, abduction, torture and murder of opponents of the occupation.

However, the poll reflects the fact that the population of the Peninsula after centuries, during which the Crimean Tatars have been harassed, as well as Stalin’s deportation in 1944, primarily focused on Russia. In addition, the poll shows that the Crimean Tatars, the Peninsula constituting a minority (approximately 10%), in spite of everything, remained United in their resistance to the occupation and this is completely contrary to statements Nested.

Creation myths and the construction of “villages” in the occupied Crimean Peninsula plays a Central role in Putin’s dictatorship.

Legendary and a true fighter for human rights, the Crimean Tatar leader, the enemy of violence, Mustafa Dzhemilev, whose Truls Lee (Truls Lie) was interviewed for the Ny Tid earlier, indicates in a new interview that everyone you meet in the Crimea on the street, will protect the Russian occupation, if outsiders would start to ask them direct questions. Jamil explains that this is due to the fact that according to the Russian law on extremism to challenge the assertion that “Crimea is Russian” that protects nistad is illegal and can lead to tragic consequences. The “villages” hides the more brutal Russian dictatorship with terror against dissidents.

Creation myths and the construction of “villages” in the occupied Crimean Peninsula is of paramount importance for the dictatorship of Putin. If the occupied Crimea will fall, it is likely that it will fall and the Putin regime. Therefore, for Putin’s regime so it is important that as more people followed the call Nistad and example four Rosenlund and as Catherine went to the promised land and would allow themselves to dazzle and seduce. Just as Catherine needed the Crimean Peninsula to secure the position of Russia turned to the West as a bulwark against the Ottoman Empire and Rosenlund — contractors of the crisis-ridden region of Stavanger, dealing with concrete, have a certain personal interest to close their eyes and confuse “the village” with reality. This is the secret hope Putin. 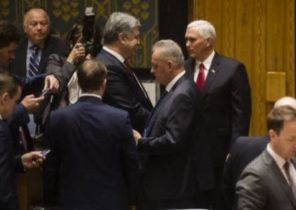