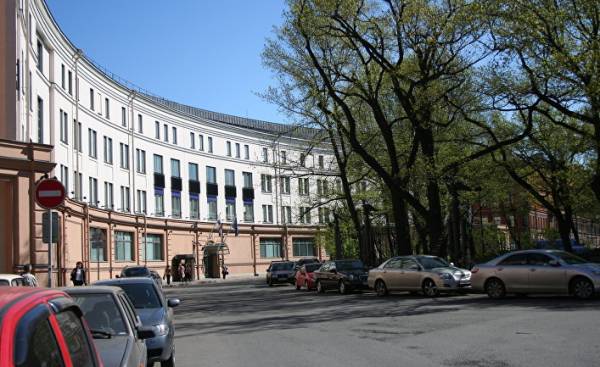 The newspaper “news” and TV channel “REN TV” has published a video in which were United two different cases, when the Finnish diplomats accused of misconduct in Russia.

Both of the controversial statements within the scope of the issues dealt with, Virpi Hanhikoski (Virpi Hanhikoski), Consul of the Consulate General of Finland in St. Petersburg.

She Hanhikoski surprised that the Russian media has made her the Central figure of scandals.

“It was very unexpected. Both cases are considered in our Consulate General as a fairly ordinary business issues,” — said Hanhikoski newspaper Ilta Sanomat.

The first “scandal” — a street fight on the Nevsky Prospekt in St. Petersburg, one of whose participants was the officer of the Consulate General of Finland. The video shows footage from a surveillance camera and says that the consular officer “behaved inappropriately for a diplomat” and that it could for such “at least be expelled from the country.”

According to Ilta Sanomat, the employee of Consulate General of Finland in Saint Petersburg, he informed the police about the fight and considers himself and his companion injured. Hanhikoski, for its part, as a responsible employee of the Consulate, tried to make sure that the incident would be duly considered by Russian officials. This person does not have the status of a diplomat and was employed by contract on the spot.

The video first show you how a journalist tries to interview a Finn who participated in the incident. The journalist also wonders why involved in the fight the consular officer is still walking freely in the center of St. Petersburg in high spirits. One gets the impression that Finn is guilty in the brawl, and, among other things, refuses to answer reporter’s questions.

Later in the video, begin to talk about smuggling in Finland, parts of military equipment manufactured at Russian plants. This time accusations of wire Hanhikoski much more serious: it seems that she is personally implicated in the scandal with smuggling inappropriate for a diplomat.

The journalist reports that Hanhikoski attended the court session on the case of suspected smuggling of Dmitry Bogachev, attempted to speak with him and pass some documents. The viewer trying to create the impression that Hanhikoski wanted somehow to affect the course of the trial, or even that she was one of those Finnish diplomats, who, in accordance with the hints in the Russian media, was directly involved in the smuggling of weapons parts and parts of fighter jets from Russia to Finland.

In the video repeatedly emphasizes the “ignorance” Hanhikoski about the scandals and is given to understand that the scandal of smuggling in any case, she had to know, because “support” the main suspect. When Hanhikoski tells the journalist that he could not comment on issues relating to the work of the Consulate, represent it as proof that she has something to hide.

Attack on Finland in Russian media began after an article in the newspaper “Izvestia”, which States that “Finnish diplomats were involved in the case of contraband of war”.

The article also claims that Dmitry Bogachev, the Prime suspect in the smuggling case, was under police protection, Finland, and the Finnish side in some way responsible for the activities of his group and transfer of details via Finland to third countries.

Weight Hakkinen (Vesa Häkkinen), head of the information Department of the foreign Ministry of Finland, was surprised by the videos, which are distributed in mass media of Russia, and hints of the involvement of Vice Hanhikoski scandals.

“Such journalism should be taken very critically. The image created in the media, completely incomprehensible,” says Hakkinen newspaper Ilta Sanomat.

Hakkinen previously told Ilta Sanomat that the Finnish diplomats is only provided consular assistance to the suspect in the case of smuggling of weapons parts to Dmitry Bogachev because he asked for it. According to Hakkinen, allegations that Finnish diplomats somehow still able to intervene in the case concerning the smuggling of weapons, totally imaginary and baseless.

“These statements, for some reason, began to spread in the Russian media, but Russian officials did not press charges and did not report that the us suspect of involvement in the smuggling of weapons,” — said Hakkinen.

Hanhikoski worked at the Consulate General of St. Petersburg for five years and must return to Finland in August in accordance with the order of rotation established by the Ministry of foreign Affairs of Finland. The Consulate Hanhikoski is engaged in the provision of consular assistance to citizens of Finland, and in some cases was very difficult.

Probably the most famous of them is the arrest of activists of Greenpeace Blue Saarela (Sini Saarela) in the fall of 2013 along with 29 other protesters against oil drilling in the Russian Arctic. Hanhikoski met with the activist in the detention center of Saint-Petersburg and followed the course of litigation.

Russia liberated Saarela bail, and later the remaining members of the group of protesters was pardoned. Hanhikoski as Consul helped Saarela in bureaucratic issues related to the return to Finland.