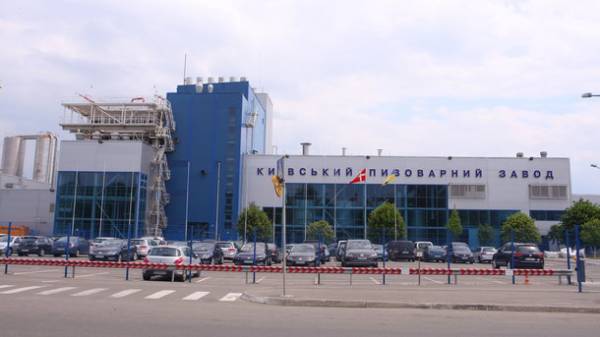 We found out whether the beer to be “green”, why “aging room” as in beer comes and goes alcohol, and to what container the beverage is retained better.

According to various studies, beer loves almost every second Ukrainian, and in summer the consumption of the drink increases significantly. And here is how the beer is produced – few people know, except in General terms of the commercials. We visited the Kiev brewery company

WHAT THE MAKE. Put on our white coats, beanies, become like the professors and begin our tour. “The plant capacity is 473 million liters of beer per year. Seasonal months are April-August and by late summer, the production volumes are falling,” – says Yuri Guk, chief technologist of the company . Beer production – not a quick process, it takes about 17-18 days. No powder, as probably some people think, “to accelerate and taste” is not added. The main components of beer – water, malt, hops and yeast. The main task is to extract from them all the nutrients and turn them into a delicious drink. The water used here from the usual municipal water supply, but at the Kiev plant is equipped with the powerful treatment system, through which special equipment lead to the necessary standard, to the taste of the beer has always remained the same. By the way, according to the brewers, one of the few places where the water is very good, soft and almost do not need to prepare is the Czech town of Pilsen. It is here where the world-famous beer Pilsner

The second important ingredient of beer is malt. This grain, which is soaked, a little germinate, and then dried and removed the sprout. Malt is barley, wheat, and even peas – true, this beer is not good. There is a caramel malt, burnt, Munich, Belgian, Vienna…. It determines the variety, color, flavor and taste the future of beer. With him and begins the cooking process. Interestingly, in a huge production shops of the enterprise a kind of “cosmic” atmosphere. Throughout the huge shiny metal containers, vats, pipes and… very deserted. Manually as explained to us, have been almost nothing done. Almost the entire process is automated, and what is going on inside the “boiler”, watching through the screens of monitors and sensors that control the indicators. In one shift in production (to the stage of filling) can be involved only up to 10 people. 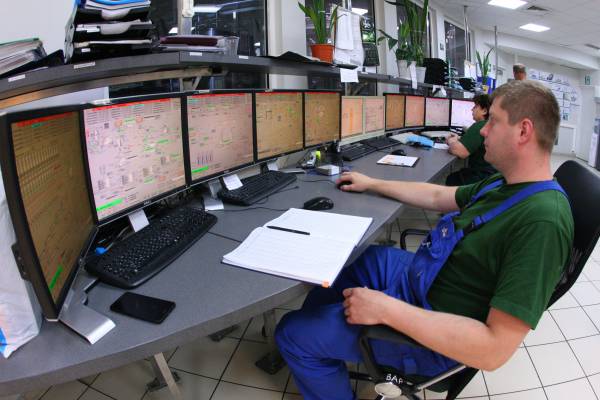 UNDER THE MICROSCOPE. So, how is it beer? The malt enters the plant is treated (on a special vibrating screen to separate stones, straw, impurities), weighing and sent to storage in huge silos. Before production, the malt is an extra degree of purification, is again weighed, crushed and mixed with water. In a special mashing tub is laid, how much in beer is alcohol, and formed his taste, and after that press the filter separates the soluble part of the wort and insoluble – pellet. “The grain we throw away, and sell breeders, this is a great livestock feed,” – says Yuri Guk. The wort is sent to stew in the cauldron with a huge boiler. At this stage undergoing sterilization (all microorganisms that lived on the surface of the grain are killed by boiling). Here you can also specify the hops that gives the beer a flavor or bitterness, depending on variety, and thick foam.

After this the wort is cooled, add yeast and a bit of oxygen to accumulate the right amount of yeast directly in the fermentation tank. Once the yeast used all the oxygen, fermentation begins. It is at this stage the wort and begins to turn into beer. The process of primary fermentation and post-fermentation, which occur in a special, cylinder-conical tanks (CCT), the longest stage in production. The first is 5 days and the second, during which formed a “bouquet” of beer – from 8 to 12 days. By the end of the process there is a so-called “green” beer, which is kept at a temperature below 0 °C during the day. CCT after the beer passes through a separator, which separates the remains of the yeast. At this stage the drink is ready for bottling – and this is unfiltered beer. The rest will be cleaned through several different filters. For example, one of them is kieselguhr. “Diatomaceous earth is a unique sedimentary rock made of shells and algae. Appreciated because it is neutral, it has no chemicals that can go into beer or pick up some taste”, – says Yuri Guk. After filtration, a transparent finished beer is sent to “rest” for a few hours in the bright tank , and from them by the glass. 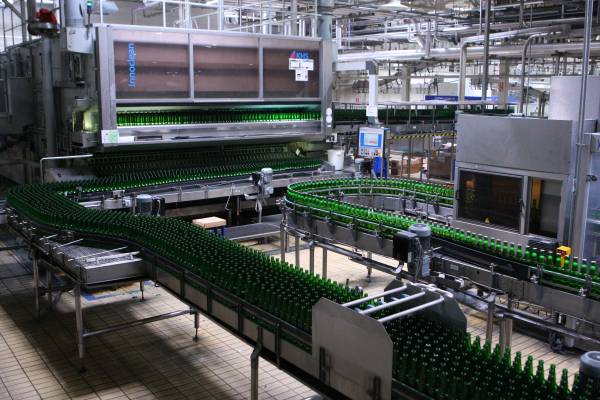 The bottling room. Bottles travel along the conveyor

POUR! In the bottling hall is very noisy. The conveyors are, ringing and knocking glass bottles “flying” plastic… No wonder the staff working here use earplugs. “We have two bottle lines, with the capacity of 50 thousand bottles per hour, two PET lines (23 thousand bottles per hour per liter format). There is a canned line with the capacity of 40 thousand cans per hour, and Kagawa line 240 kegs (metal barrel) per hour. But these lines don’t work 24/7. Only in half its strength. The rest of the time is spent to follow the schedule of disinfection and foam washes that the equipment is kept clean and safe. We spend a lot of time, effort and money,” says our guide. The filling process is as follows: bottles are washed, sent to a special unit where filled with beer and then closed the lid. And then they glued label, and they easily fit into the boxes that were taken away to the warehouse. It is almost the finish line: warehouse beer goes to the final destination – in the place of sale.

The whole process of beer production is carefully controlled, from the stage of taking cyberrebate in the biogas – we have a station for wastewater management, which produces such operations.. the Risk is minimized”, – says Yuri Guk, and allows us a glimpse into the laboratory where are made all sorts of “beer analysis”. Around here cones, jars and modern equipment, which helps to set a perfectly accurate measurements. Laboratory workers do not look severe, but without the approval of their bottled beer is not. “The production operators and engineers at the laboratory can block any process – it is not necessary to refer to the manual and to ask someone’s permission”, – says the chief technologist. Obligatory control is at the stage of filling: pipeline removed the bottle, carried out chemical, microbiological analysis of contents, and evaluated the appearance. As the washed bottle as corked as pasted label… “If everything inside is good and outside is not very – this is equivalent to “all bad”, – says Yuri Guk. rd and ending with a stage of “rest” of the beer in the bright beer tanks, and bottling. Even samples of malt are stored here until the end of shelf-life of beer, that at any moment it was possible to check everything from the beginning. “Points of control much more than required by law, is enormous and the number of indicators for which there is a check” – they say at the factory. If at some point inconsistency, assess how critical they are. If necessary, take a step back: return all the one of the earlier stages of production, unless, of course, this will not affect the quality of the finished product. “The second option is to send everything in 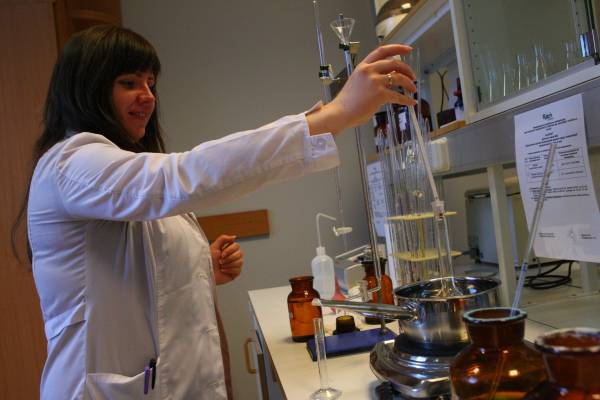 Lab. The employee control the quality of all products

Is in the enterprise and special tasters that are included in the core of the tasting Commission. “Three times a week later tasted randomly selected samples of those that we produced. Plus those samples are stored in a special “room of aging.” Thanks to her, we can appreciate how the taste of beer during storage and try that people will drink the fourth, the fifth month after production. Twice a month is beer tasting. Go, buy, bring yourself and analyze how the beer feels on the store shelf, because each seller holds and exposes it in different ways,” says Yuri. By the way, the tasters are trained, after which their skills are assesses by an external company. Can everyone learn this? Unlikely. The factory says that the man still has by nature a little to have a special taste sensitivity. 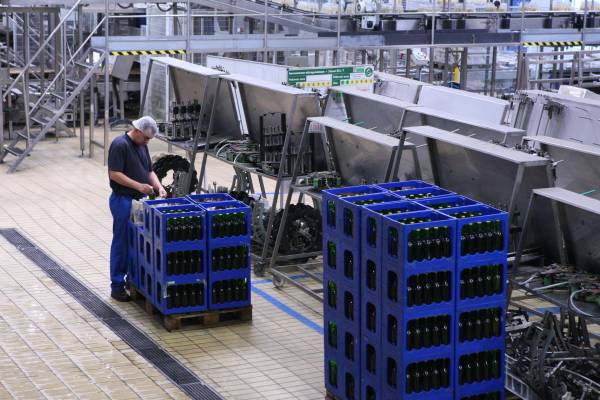 The last stage. Beer is Packed in boxes and taken to the warehouse

There is a widespread belief that the brewers brewed for a special beer and not drink that is prepared for all. After familiarization with the production process, it becomes clear: it is a myth. “Based on the size capacity of 240 tons, cook for yourself at a time such amount would be enough until the end of life” joke at the factory. Here and dispel the legend that for bottling jars, bottles and kegs beer under the same brand brewed quite different. “There is one production line, beer and any kind of containers are the same. While it is true, during storage, the contents may more or less vary depending on packaging.”, – says Yuri Guk. Debunk the myth that beer of the same brand produced here in Ukraine and, for example, in Europe – it is two big differences. At the enterprise explain that the beer is brewed under license and that it complies with the quality standard, strictly follow. Besides the beer produced in different countries, the company also estimates an external company and makes the evaluation. .

With regard to the use, the ideal serving temperature for beer tasting + 10°C, but warm beer really loses its taste.

We have also learned a few secrets about nonalcoholic beer. It turns out that it is absolutely the same as and alcohol, almost to the very end. But before you get into the bright tank and go for bottling, it undergoes an additional stage – dealcoholization by dialysis: the beer passes through a special semipermeable membrane and gives off alcohol. Roughly speaking, soft is just a regular beer, just without alcohol. True – the drivers be on the alert! – approved gonnerman, up to 0.5% alcohol in a nonalcoholic beer may still contain.

For the same capacity of the plant serves not only beer, but other drinks. Special , for example, root beer was originally doing the same as usual, but just before the filtering process. After this phase, it falls into a special container, where it is added natural extracts or natural aroma of the ingredients and high fructose corn syrup for sweetness. The process of making kvass is similar to beer, but the fermentation process breaks off after the first day, with rapid cooling. The brew is filtered and goes to the glass. By the way, some do this method and non-alcoholic beer, and then it has a very sweet taste. 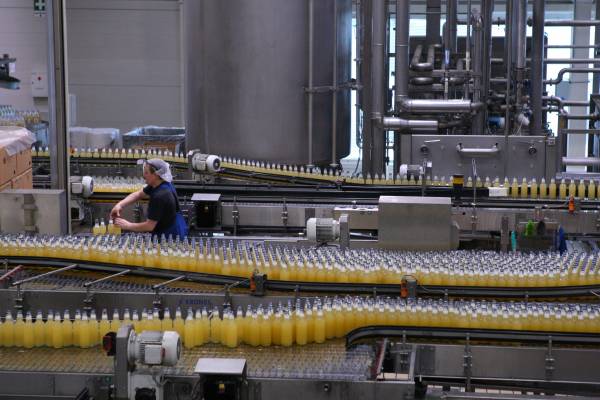 But the production of cider begins with a wort boiler. It is based on concentrated Apple juice and glucose-fructose syrup. “We are restoring the Apple juice concentrate, sterilize them by a method of annealing at a temperature of 85°C, cooled, set the yeast. The fermentation process of the cider is much faster than beer. And for 10 days it is already possible to start filter”, – explained to us at the factory.