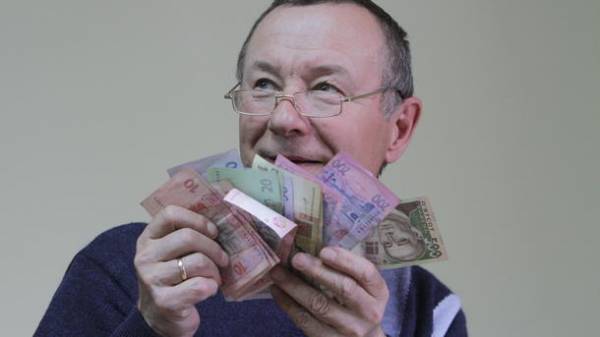 In the framework of the pension reform the government in October, proposes to abolish the partial payment of pensions for working pensioners. Currently working Ukrainians have the right to receive only 85% of their pensions, the rest remains in the budget of the Pension Fund. According to article 47 of the law “On state pension insurance”, after charging 15% of the working Ukrainian remains the pension less than UAH 1870 (150% of the subsistence minimum for the disabled), will be paid a full pension. The experts say: hold 15% of the pension is not tax, and partial payment.

At the moment, in Ukraine about 650 thousand working pensioners. If a partial payment is canceled, then in October they will receive pensions 17% higher. For example, if at the moment employed Ukrainians receive a pension in 2000 hryvnia, on the first of October it will increase to 2352 UAH.

At the same time, the estate tax, which is pegged to the minimum wage, next year will increase twice. So, the tax is paid for the past year and considered payroll as of the first of January. Tax must be charged for apartments with an area of not less than 60 squares and home area of 120 square meters. If the ownership of the house and the flat – tax with a total area not less than 180 squares. In this case you need to pay for each “extra” square in excess of the norm. Local authorities can increase provision, for example, charge a tax on apartments area of between 60 and 80 squares.

For example, if there is an apartment with an area of 70 squares, when “norm” of 60 squares will need to pay only 10 metres, while the norm in 80 squares – not have to pay. Each “extra” square meter is not more than 1.5% of the minimum wage as of January first of last year. 2016 started with minimal 1378 hryvnia. Thus, this year for each square square surgery need to pay from 0 to 20.67 hryvnia. For example, the Kiev apartment of 100 square meters have to pay for 40 squares 551,2 hryvnia (if tax rate 1%).

We will remind, earlier “Today,” answered the major questions about the real estate tax.