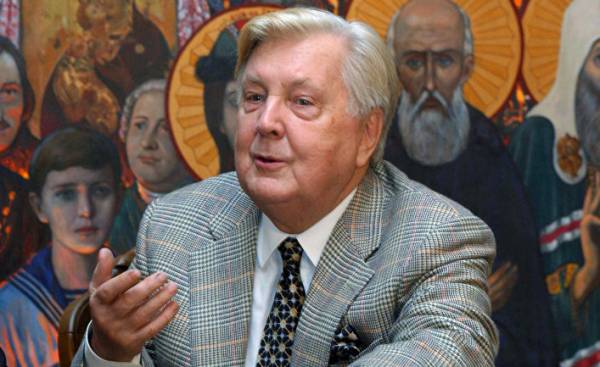 In the 1970-ies Glazunov was a frequent and familiar to all PM of Finland. In 1973, he painted the portrait of President Urho Kekkonen (Urho Kekkonen).

The idea of writing a portrait, most likely, came from the Soviet Union.

Portrait of Kekkonen was preceded by written in 1958, portrait of Anita Hallama (Anita Hallama), wife of the second most important person at the Embassy of Finland in Russia Hallama Jaakko (Jaakko Hallama), which later had a relationship with the President.

With the support of Anita Hallama Glazunov in the 1970-ies became court painter of Finland, which delighted the Newspapers. His models were a fashion designer, the founder of Marimekko Armi Ratia (Armi Ratia), politician Johannes Virolainen (Johannes Virolainen) and entrepreneur in the field of fashion, Kivilahti Kaarina (Kaarina Kivilahti).

Artistic merit of the portraits of Glazunov’s (and others of his works) all the time questioned. However, Finns, who signed with the USSR the Treaty of friendship, cooperation and mutual aid, would not openly criticize them. Kekkonen was also not overly impressed with the portrait, and his long time anywhere did not put, especially in the residence of the President of Finland Tamminiemi (now in Tamminiemi — Urho Kekkonen Museum, approx. TRANS.).

Now portrait can still be seen in the Helsinki Sinebrychoff Art Museum in the exhibition “I am not I” (“Minä minä en ole”).

In 1980-ies on the art of Glazunov’s reputation was dealt a blow. Finnish agent and Manager were involved in the smuggling of works of art. Surfaced the question of the authenticity of works, which was signed by Glazunov.

The Central criminal police of Finland has announced the artist wanted, and he was so angry with the charges that have ceased to travel to Finland.

However, he remembered the warmth of Finland in an interview with the monthly application of the newspaper Helsingin Sanomat, saying that his mother was born in Terijoki (now Zelenogorsk, approx. TRANS.), and Marshal Mannerheim was a “great man.”

The greatest was Urho Kekkonen.

“Kekkonen was a true Finn, he loved his people,” — says the artist.

Ilya Glazunov was born in Leningrad in 1930. His parents died of starvation during the siege, but the boy survived and in 1951, began to study painting at the Institute of painting, sculpture and architecture named after I. E. Repin.

The first personal exhibition of works by Glazunov was held in Moscow in 1957. After the young painter quickly won over the leaders of the Soviet Union. I assume that this did not happen without the support of the cultural elite or the KGB.

His popularity also contributed to his anti-modernist orientation of his works and their national-Patriotic nature: instead of socialist realism in the works of Glazunov were viewed old tradition of writing. Besides, he was anti-Communist and Orthodox believers, who supported the idea of restoring the monarchy and class society.

All his works the seal of contradictions. Glazunov supported dissidents in the Soviet Union and brought them from abroad, books and typewriters.

At home he perpetuated the Communist leaders — such as Leonid Brezhnev and Andrei Gromyko. In 1980 he was awarded the honorary title “people’s artist of the USSR”.

In the 1980s began a new period of creative work of Glazunov. He began to paint huge canvases with allegories of the history of the 1900s.

On the canvas “Mystery of the twentieth century” (1977-1999) depicts rulers from Nicholas II to Hitler and artists from Mick Jagger (Mick Jagger) to Alexander Solzhenitsyn. A gloomy picture of the lights in its light Christ.

Since the international success and popularity at home enough, Glazunov could live royally, although the Soviet Union ceased to exist. In 1987 he opened his own art Academy, and in 2004, a private Museum in Moscow.

The last time he was known as a supporter of Putin, a representative of the extreme right and an anti-Semite.

A few years ago, he appealed to Putin with an appeal to impose restrictions on contemporary art and to return pride of place realistic painting as the one true direction in art.