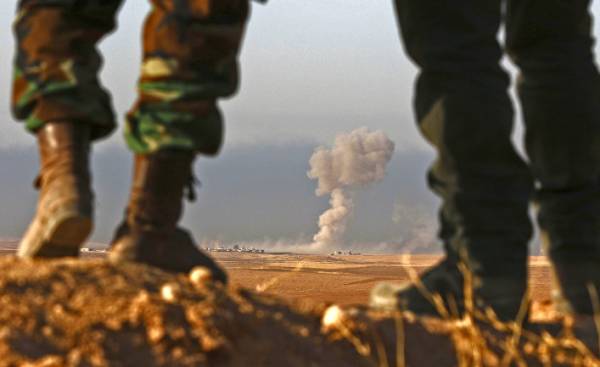 We are approaching the end of the play, which is staged in the Middle East. How it acts is hard to say, but, at least, the first is about to end.

First of all, let’s remember that was after the occupation of Iraq. USA, who came to Iraq in the name of democracy (!), very soon they began to talk about the tripartite structure in the country.

In the future, the Turkmen in Mosul, Kirkuk and Telafer faced with strong pressure from Barzani. Their house was sealed, cadastral books were burned, the whole demographic structure of the region was turned upside down.

As a result of these oppressions, Turkmens were forced to migrate EN masse. In the future, there was a puppet ISIS (banned in Russia — approx. ed.). This bunch of killers who call themselves Muslims, in all its glory revealed, as it serves Islam by killing Muslims.

In Mosul forces, which supposedly are part of the Iraqi army, abandoned their tanks, guns, not making a single shot, and gave this city the terrorist organization ISIL.

Then came the other part of the play. On the battlefield under the pretext of fighting ISIS was withdrawn, the Peshmerga, and with the command “action!” began a Hollywood film based on the American scenario. Barzani, saying “I struggle with LIH,” 35% increased their territory.

Bloodthirsty puppet ISIS was expelled from Mosul. So in many ways has paved the way to the micro-state under the American mandate.

A factor that influenced adoption decision Barzani about holding referendum in the near September, — of course, not a movement for independence. From now on, the structures that are assumed to govern the world, we need micro, not the nation-state. And the most obvious example of this we see in Iraq and Syria.

Now, some carried away by the idea that Barzani’s decision on the referendum will not be valid. But it’s exactly the opposite, Barzani will support the US and Russia. USA — it is understandable, but why Russia, you ask?

At least for 20 years, the Russian oil company “Rosneft” will produce a significant part of oil in Northern Iraq and to conduct a new survey.

We now turn to the main issue. In 1926, Turkey signed in Ankara an agreement with Iraq and great Britain, under whose mandate he was, and this contract defined the current Turkish-Iraqi border.

With this document, Turkey renounced its rights on Mosul and Kirkuk, which have been included in the national Pact of Turkey in 1920. After the referendum in Mosul and Kirkuk will refer not to the Iraqi state and micro-state under the mandate of the United States.

In this case, the Ankara agreement will be cancelled. Can Turkey regain their rights after the cancellation of this agreement?

Mosul and Kirkuk, which will be the Turkish lands due to the fact that after the abrogation of international agreements going back to the situation that occurred prior to these agreements, will again become the priority issues of Turkey’s foreign policy.

Turkey has the right to require the Mosul and Kirkuk ago. At the same time, the rights of our Turkmen brothers, which still exceeds a million, are under the guarantee of the Turkish state.

Therefore, in the case if there exists such a determination, we can return to the fact that he gave a hundred years ago. As stated in the famous verse: “There is an evil which you feel good; is good, which you consider to be evil. Allah knows and you know not.”