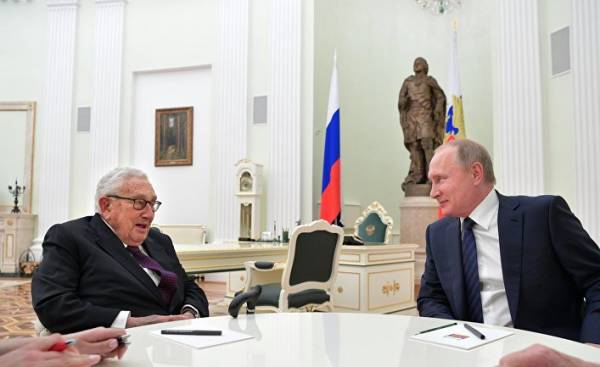 A few days before an expected meeting between Russian President Vladimir Putin and his us counterpart Donald trump on the sidelines of the G20 summit in Hamburg, the “old Fox” has visited Moscow. 94 years is not a burden for Henry Kissinger. The veteran of American diplomacy is still able to play the role of “engine” in the most difficult issues of international politics, including about U.S.-Russian relations.

In addition to the visit to the forum “Primakov reading” the architect of the policy of détente between the United States and the Soviet Union in the 70-ies of the last century, was a guest of Vladimir Putin in the Kremlin, and held a long meeting with Minister of foreign Affairs of Russia Sergey Lavrov.

It should be noted that this is not the first meeting in this format between “king” and “Fox”: the two figures leading to a long conversation about international politics, ties of personal friendship, and they never miss a chance to Express to each other their admiration.

However, the sudden appearance of Kissinger in Russia (although it is known that he attended the scientific forum, dedicated to the memory of former Russian Prime Minister Yevgeny Primakov), has prompted speculation that the us leader arrived in Moscow to offer services to diplomatic mediation, especially considering that it happened a few days before the summit in Hamburg. As pointed out by the Russian media before heading to Moscow, Kissinger met with Donald trump.

The administration of the President of Russia has hastened to clarify that the meeting between Putin and Kissinger had a private character and was not aimed at establishing any contacts between the Kremlin and the White house. However, there is no doubt that in recent times observers have noticed the frequent movement of the “old Fox” between the capitals of States under the pretext of academic cooperation that gave him the opportunity to meet with the leaders and officials of many States. In fact, the return of Kissinger on the political scene came as a surprise to many, especially because it was preceded by a decade of geopolitical setbacks.

It was obvious that the star of Kissinger, who brightened the era of the reign of all the American presidents since the presidency of Richard Nixon, began to fade in the era of Barack Obama, and it happened for several reasons. The most important of these is the rapid rise of the Russian state since the beginning of the second presidential term of Vladimir Putin, which in turn coincided with the election of Barack Obama for a second term. In these circumstances, the White house began the search for a new vision that would show him how to move the pawns on the “Grand chessboard”.

However, the star of “the old Fox”, around which in recent years were rumors that he was suffering from Alzheimer’s, shone again in November last year, when he wanted to meet Donald trump right after in the United States presidential elections are over. Note that the meeting took place, despite the fact that Kissinger is a close friend of arch-rival trump’s Hillary Clinton. 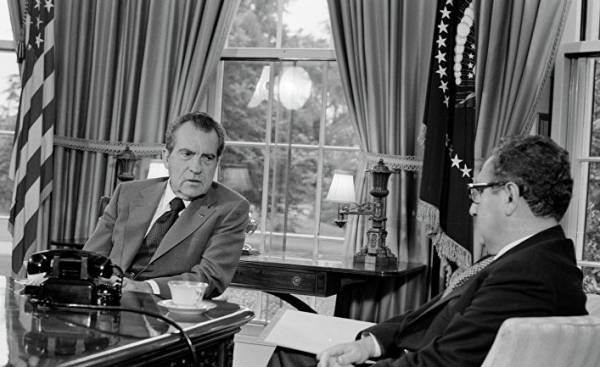 At this meeting, trump listened carefully to what advice he gives the architect step-by-step policy in the middle East, adopted after the 1973 war, also “saved” by President Richard Nixon during the Vietnam war. Kissinger told the new President what should be done in the field of foreign policy, especially on such serious issues as U.S. relations with Russia, Iran, Syria and North Korea.

Regardless followed whether Donald trump the advice of a veteran diplomat or not, the output of Kissinger in the political arena has had a significant impact on some of the political moves of the new President. First and foremost, in this regard, it should be noted the meeting which took place between Donald trump and President XI Jinping in April this year in Florida. Diplomatic preparations for this meeting were engaged in Kissinger, who unofficially arrived in Beijing in December last year. Perhaps what made the “old Fox” according to the Washington-Beijing is happening now on the Washington-Moscow.

For this reason, many with great interest I listened to a speech Kissinger at the scientific forum “Primakov’s reading.” So, in his opinion, “before Putin and trump offer a serious opportunity to improve not only bilateral relations, but also joint efforts to improve the situation in the world as a whole.”

As usual, Kissinger used a pragmatic diplomatic phrase, noting that tensions between Russia and the United States is not something new: the relationship between the two countries were often strained, but every time you overcame difficulties. However, many believe that “optimism” is based on Kissinger’s “romantic” ideas of the old diplomat, who is trying to use political equations used in the twentieth century to solve the complex problems of the modern era. All this coincided with the controversial position of the trump, under which the US and Russia offers “an important opportunity”. However, the views of Kissinger can be one of the “keys”, to which the President of the United States may resort in the complex process of negotiations with the Russian competitor in the framework of the proposed meeting.

Perhaps the views of Kissinger will be useful for Donald trump if he wants to understand the logic underlying the political actions of Vladimir Putin across Eurasia. He can understand, than it differs from the logic of those who make major decisions in the system of military intelligence in Washington. 94-year-old diplomat does not share the hostility to the Russian President the views expressed by many American politicians. In particular, he warned them of the danger of the policy of sanctions against Russia and refused to look at Putin as “the new Hitler”, considering that the Russian leader is merely trying to achieve everything in his power for his country.

According to Kissinger, what primarily determines the policy of Russia is that Vladimir Putin accurately calculates the national interests of his country and strongly protects them.

Very often in our approach to Russian politics, Kissinger refers to the “internal emotional connection” between Vladimir Putin and Russian history, when he sees the Russian President responds to attacks from the West. According to the diplomat, he responds to them as would answer Peter, if he lived in our time, speaking of the Emperor, by which in the beginning of the XVIII century, Russia joined the ranks of advanced countries after he managed to solve many internal and external problems.

That is why Kissinger believes that it is impossible to separate the internal problems facing Russia, particularly in the economic sphere, the foreign policy challenges that threaten its vital and strategic interests in the international arena.

This explains, as a consequence, the ongoing failure of Kissinger to support the hostile policy of the US and European countries against Russia. As the American diplomat considers that “in the interests of everyone, that Russia remain a part of the international system”, and it is impossible to ignore its strategic position in the international arena, as Russia is not “isolated from all island”.

Despite the fact that Kissinger is a supporter of “resistance to Putin,” it urges to be prepared for the fact that there will come a time when you need to end confrontation with Russia. In more detail, it is possible that the opinion of Henry Kissinger has a significant impact on the position of Donald trump on the most difficult issues in U.S.-Russian relations, including Syria. Moreover, his views were consistent with the initial views of trump, before they have undergone significant changes in connection with domestic political pressure.

Assumptions, of which Kissinger comes in explaining Russia’s policy in Syria is that Putin’s position is determined by the “growing concern over the rise of radical Islam” and “the reluctance that the United States unilaterally determined the fate of the Middle East”. Accordingly, when the White house found itself in an awkward situation in connection with the failure of the Congress to support a military strike on Syria, Putin saw this as an opportunity to intervene to ease the situation for the American side and trying to cooperate to resolve the conflict.

Kissinger believes that the source of greatest concern to Putin in Syria is the possibility that this conflict will contribute to the strengthening of radicalism in the region, not to protect a particular person (referring to Syrian President Bashar al-Assad). As the diplomat says, it is wrong to think that the Syrian problem is a single person, that is Assad, and that his departure will solve all the issues.

All the ideas Kissinger may constitute the ideological Foundation of pragmatic policy, which seeks trump, and diplomat hopes to find a way to “deal” with Russia during the summit in Hamburg. However, much shrouded in uncertainty, particularly because the diplomatic rationality of the “old Fox” not enough to affect the “military price” of each option under consideration by the US administration.