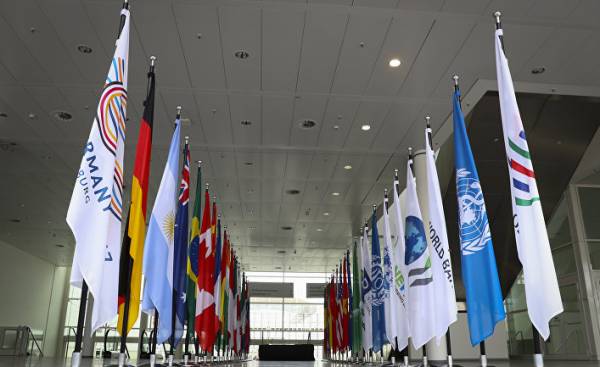 The G20 summit, which begins this week in the German city of Hamburg, will take place very rapidly from many points of view.

In the middle of an important discussion is based primarily on the fact that this summit will be held in Germany. Germany has long been a problematic attitude to “developing countries” forming the skeleton of the G20, particularly Turkey, and more specifically to the countries of the “East side”. We can say that this is a problematic relation formed mostly from the early 90-ies in the process that began with the fall of the Berlin wall. Germany with the destruction of the wall initially included in your part of East Germany. In fact, the “absorption” of East Germany was the first step towards a new process of fragmentation of colonization, which started with Germany in Eastern Europe.

Brzezinski calls this process “Balkanization”. Yes, the civil war in Yugoslavia and its partition was the new colony project, which began in Eastern Europe and through Turkey stretched to the Caspian and the Eastern Mediterranean. But he was suspended three times: first in Yugoslavia, and this problem was resolved by the civil war (!), then in Turkey and in the Eastern Mediterranean region and North Africa, where the struggle still continues.

The problem of tension…

This is the historical, economic and political background of “tension” in relations between Turkey and Germany. Germany literally yearns to fill the spaces that the United States released under the influence of the 2008 crisis.

This “desire” is, unfortunately, a lot of times returned her to the dream of the Reich in 1930-ies. Especially “encouraging,” Germany’s political deadlock, which began with Brexton.

It is advisable to say the following: of course, Germany will not be able to single-handedly implement the project of “Balkanization” that would cover all of Eurasia. She wants to connect the US and the UK, showing them the Russian and Chinese whips, trying to attract them to his side.

Especially on such important institutional platforms like G20, it tends to act as a mouthpiece imposed policy of Western developed countries on such important issues as economic growth, protectionism, new trade order, the problem of refugees, and brought the Manager in Europe with a club in his hand.

At the summit in Turkey, Germany opposed all the proposals of developing countries, primarily Eastern Europe, in the direction of inclusive economic growth and to impose to these countries the anachronistic, colonial, failed policies of the last century. Today, all the political and economic crises in southern and Eastern Europe, especially the debt crisis in Greece was caused by the policies, which Germany had imposed in 1989.

It is therefore an overvaluation of the Euro and that the currency has effectively replaced the German mark, now is not only a problem of the Eurozone, but threatens financial crisis for the whole world.

Because expensive Euro is pulling down exports of the countries of Eastern Europe and transforms these countries into the internal market of Germany. Germany’s current policy is to create a chain of countries that can’t stay afloat without external debt and imports, and politically control them.

In addition, EU policies related to the movement of labor and capital, above all protectionism, also defines Germany fully in line with their interests. And why the EU is failing to fulfill its promises given to Turkey on the issue of refugees.

Now one of the main topics of the talks in Hamburg — the problem of migrants and refugees. The primary responsibility for this problem because it created hot zones of conflict and civil wars, and in terms of social integration of refugees are countries such as Germany. From this point of view, the position of Turkey on this issue and her opposition to such an economy and politics that brings people to poverty are absolutely clear.

At the upcoming summit, Turkey in the framework of inclusive growth voiced their proposals regarding the main economic problems concerning the developing countries, who share one fate, and their economic policies.

Inclusive growth, which was actively discussed at the G20 summit in Antalya, and the economy focused on small and medium businesses, as well as new trade routes and energy routes, which arose on the agenda after a year at the summit in China, a new trade order, the trading with the use of national currencies — all these issues will be also raised by Turkey at the next summit.

In addition, Turkey will at every opportunity to emphasize that the problem of migrants and refugees considers it primarily as a humanitarian problem. Turkey will pay attention to what dangerous consequences will give rise to the fact that the developed Western countries refer to this problem as economic and political issue that comes even before the racism. The upcoming G20 summit, of course, will not allow you to work out a solution to end the humanitarian tragedy in force, above all, the host of this summit to the problem of refugees, but Turkey is right to talk about the cause and the solution to this problem.

The basics of important issues, such as unemployment, including among young people, no doubt, was founded the economy and politics, which have become a relic of the last century and only serve the transfer of resources in some developed countries.

Now a new technological revolution carries all of humanity, and to establish a just world order, the basic approach in such summits like the G20, should be elimination of this process to the fore to overcome vestiges of the past.