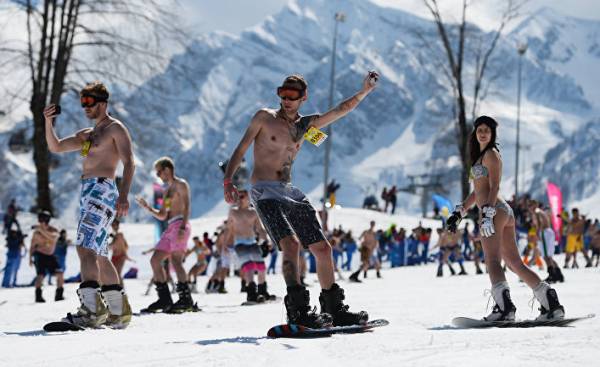 In Russia, people have self-irony. In the restaurant near the Olympic stadium next to the entrance is four rings and a star — picture from the opening ceremony of the Olympic games 2014. Five glowing stars had to open up and transform into the five rings, but one star did not deploy. Instead it seemed like someone put next with four Olympic rings the star-footnote. As Russian television showed the moment (was broadcast with a slight delay) because the footnote proved to be so controversial the way to the winter Games under the palm trees on the black sea coast, this episode, of course, went around the world. And the Russians? They irony beat the scene at the closing of the Games. Now the incident continues to live in the Olympic area in Sochi.

But still much more noticeable than the episode with asterisk, that over a sports complex on the Black sea and over the ski resort soars a huge figure of 50 billion euros. 17 billion of them, says Russian President Vladimir Putin, fell on private sources. How much was spent on corruption, which company got a state contract and what is left of the taxpayer in the form of the declared private investments, it has different views. However, 50 billion euros — more than the cost of all previous winter Olympic games. Sochi has become a symbol of gigantism.

And now, after three years after the games sports venues are still standing in the same circle in the center. The Olympic stadium stands out among them like a huge shell. The night light is on the roof, in the early days in rainbow colors, and then in blue, red and white — the colors of the Russian flag. The stadium which held the opening and closing of the Games, was converted to host the world football championship in 2018 for 47 million euros, so wanted FIFA. The organization demanded the open roof, in addition 40 thousand seats were insufficient. What will happen to the stadium after 2018? Nobody knows about it. The local football club, FC Sochi (founded in 2013, the third League), declared in these days, during the matches of the confederations Cup, which will take a break for one year.

If this summer passes over the territory of the Olympic objects, it becomes obvious desire to fill this is designed for the only event the territory of life. In the ice Palace “Big” now playing newly established hockey team in the first League. In a huge “Adler-Arena”, built for competitions in speed skating and is now located at the tennis Academy. The day after the semifinal match between Germany and Mexico here trained dancers and gymnasts. In the ice Palace “iceberg” on the same day is the view on ice “Romeo and Juliet”, which came a lot of spectators.

Arena for both Curling and the training hall were the victim of a target to build all the facilities within walking distance from each other. Is he in another place, it would be possible to convert it in the gym, that was the original plan — after the Games to transfer it to another location. But the venture didn’t work out. Through the whole complex is the route of “Formula-1”. Now it’s closed, resulting in all the territory shares a two-meter metal fence.

Olympic complex on the coast — only one part of the overall complex, its second part located in the region of Krasnaya Polyana. Everything here came from nothing, and for a very short time, built a new ski resort, the forests on the slopes was cut down, installed the lifts of the Austrian company that built luxury hotels in the valley. A ski resort with runs that have a length of 77 km is one of the largest in the country. Huge by Russian standards, but microscopic compared to European resorts (ski slopes, the largest Austrian ski resort — 760 km). Because of the large-scale construction projects — including highway and railway from Sochi to the mountains), this object was considered the most controversial in the whole Olympic project.

In a cafe a lot of visitors, McDonald’s is crowded

Three years later, it seems that Krasnaya Polyana was able to win from the Olympics. On a summer day shortly before the start of match of the confederations Cup here is full of people in a cafe a lot of visitors, McDonald’s is crowded. The Central square is the Olympic podium, all the kids want a photo to stand on it and lift arms to the sky. Some lifts work, formed a queue. On top of Rosa peak, located at an altitude of over 2000 m enthusiastic people are doing selfie in front of the ski Lodge. In some places ski area can be distinguished from a valley in Austria only in Cyrillic.

The Russian Union of tour operators said that in peak days in the winter in Sochi is coming 12 thousand tourists. Due to the low ruble is primarily Russian. Some predicted that there will be a Ghost town of expensive hotels. Whether they are designed for the oligarchs who own ski resorts, time will tell. The Russians seem happy to go here. But this is only part of the truth.

Because quite different is the situation with sports facilities. The bobsleigh track is closed. Anyone who wants to visit her and stands in front of a fence and a sign forbidding passage. It says that buildings can be visited, but first you must book a tour in town and then come back. Here was held the world championship in bobsleigh and skeleton, but the international Federation has withdrawn the right to host the competitions in Sochi from-for scandal around performance-enhancing drugs. When Sochi hosts the Russian Grand Prix “Formula 1”, the selected riders for promotional purposes slide down the bobsleigh track. Ski and biathlon complex is in good condition in the centre of the ski resort — but no one famous athlete long gone trains. The latest international competition on the trampoline was an Olympic final. And skiers go there, most juniors, for example, at the world Cup in Rosa Khutor.

The world Cup should cost a total of € 50 billion. That is, it will cost the same as the Olympic Games. If you ask Russians what they think about what their money is going to multimillion-dollar arenas, most of them shrugs. And the streets are rebuilt, and they rebuilt and after the championship. If not for the championship, we wouldn’t have seen anything from this money. And so that’s something.

Trump and Clinton shook hands after the inauguration