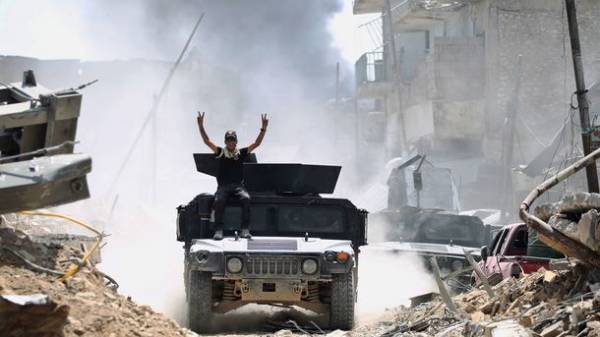 The complete liberation of the Iraqi Mosul from the militants of the “Islamic state” (ISIS) is expected in the next few days. On Friday, June 30, the Agency Rudaw said General Abdul Wahab al-Saadi, the commander of the “Golden division” anti-terrorism service of Iraq – CTS.

A day earlier, Iraqi troops seized the ruins of the mosque an-Nuri in the middle of the Old town in Mosul. In this mosque the same day three years ago ISIS was declared a “Caliphate”. After the liberation of the mosque the Prime Minister of Iraq Haider al-Abadi proclaimed “the fall of ISIS”.

About the “full liberation of the city in the coming days,” al-Abadi said last week, 22 of June, but after that, the Islamists seized the hospital complex of al-Jumhori to the North of the historic centre, and only by Friday was completely knocked out.

Now the Islamists are in control in Mosul, about half of the territory of the Old city is a space with an area of about 1.3 sq km on the Bank of the Tigris river. Estimated General CTS Abdulgani al-Assadi, they continue to fight around 200-300 fighters.

The capture of Mosul: six months of urban fighting 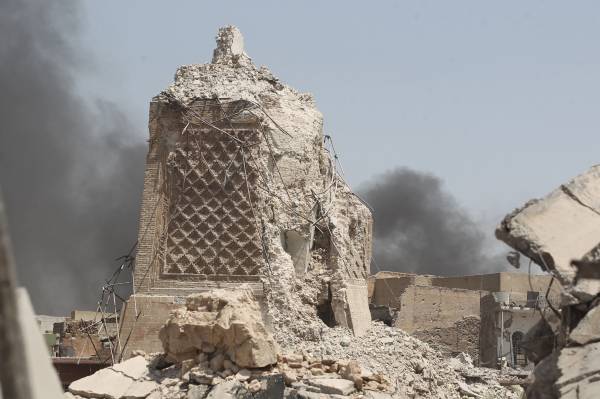 The operation to liberate Mosul, which was considered the “capital” of the Iraqi part of ISIS, began in October 2016. In two weeks, by the beginning of November, advance units of CTS reached the Eastern outskirts of the city and seized the television station. By 23 November 2016 other units of the Iraqi army circled the city from the West, closing the ring, and then began a protracted urban fighting.

Thus, of the eight and a half months of the campaign last seven is a battle in urban environments. In December, Politico reported large losses (up to half of personnel) in the elite units of the CTS. The then commander of the “Golden division” CTS Fazil Baran 21 Dec claimed that the city “will be fully released in about two months.”

At the end of March, the American General Joseph Votel said that in six months of operations in Mosul killed an Iraqi soldier 774. Together with the allied forces of the antiterrorist coalition losses exceeded, according to some, 800 people. ISIS supporters, meanwhile, argue that the bill is in the thousands allegedly by February 2017 have been killed already 7 thousand Iraqi soldiers.

Likewise, different data and the number of those killed in Mosul the Islamists: 800-900 killed up to 8-9 thousand.

The losses among the civilian population during operations in Mosul reach at least 8 thousand people (according to the beginning of may). According to the latest UN since the beginning of operations to June 17, the city was left by 860 thousand refugees – about half of the prewar population. In the remaining part of the Old town remain hostages of the fighting up to 150 thousand civilians.

ISIS in the rings of fronts 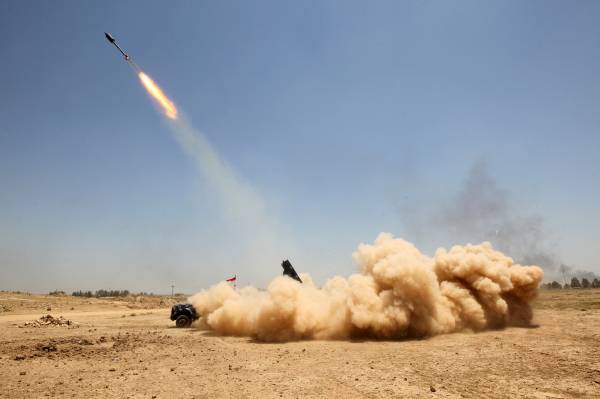 The offensive on the positions of ISIS is coming from all sides – in Libya, troops of General Khalifa the Haftarot (representing the “government in Tobruk”) a week ago, launched an attack on the last enclave of supporters of the “Islamic state” to the South of Benghazi.

In Syria since June 6 continues the siege of Raqqa – the “capital” of ISIS waged by “Democratic forces of Syria” (SDF), consisting of the Kurdish militia and fighters of the moderate opposition. On Tuesday, the SDF troops have captured the second of two bridges across the Euphrates, completely surrounding the city.

In Central Syria, the army on Friday reported a full release of the highway linking HOMS and the coastal province of raqqa and the strategically important Tabqa dam. Thus, the forces of ISIS to the North of the road was surrounded.

The success of the attack on ISIS on all fronts does not mean the collapse of the organization, the head of research at the Institute “Dialogue of civilizations” Alexey Malashenko.

“They are not defeated, they retreated, left the territory. Where now these people will show themselves from their military experience and religious fanaticism, we can only guess,” said Malashenko.

The “Caliphate” without territory 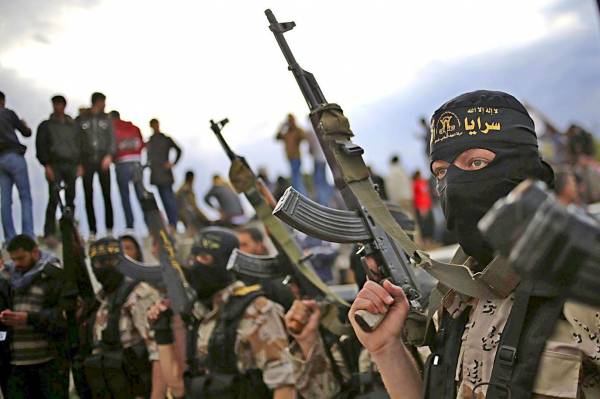 This week, IHS experts Markit in its report said that the project “Caliphate” in current conditions close to failure. For three years ISIS has lost more than two thirds of the territories under their control, which decreased from 90.8 thousand sq km in 2015 to 36.2 thousand sq. km.

In this regard, according to the study, 80% of the decreased revenues of the group, which consisted of the sale of oil and oil products, the collection of tribute in the occupied territories, the confiscation of property and other illegal actions.

To compensate for the losses due to the increase of tribute to a still ISIL areas of control, according to forecasts by IHS, will not work. All this, according to analysts of the Agency, will lead to the fact that fighters will throw more resources to the preparation of terrorist acts abroad. And the struggle of Western countries against ISIS may lead to a radicalization of conservative Muslims. 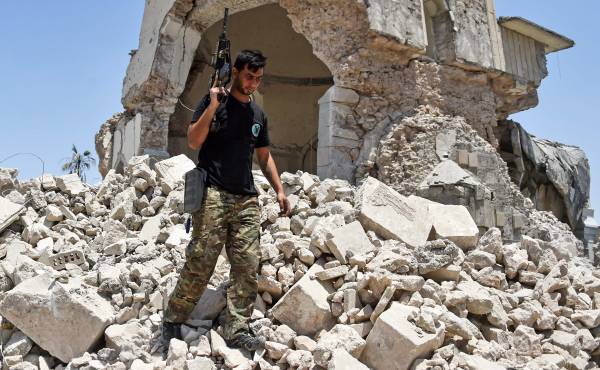 Chatham House experts also believe that the loss of territory will not destroy ISIS, but will cause the group to position itself now as a clandestine organization.

As a result, the “Islamic state” is likely to change the military and economic tactics. It will invest its cash reserves in the formal and informal economy and actively integrate into the Iraqi society.

With the loss of territory ISIL is no longer able to provide security for the smuggling networks. Then, says Chatham House, the organization will focus on legal business with profit orientation and work with the tribal elites. A significant role in this play mediators — Sunni and Shia businessmen who agree to deal with ISIS for economic reasons. 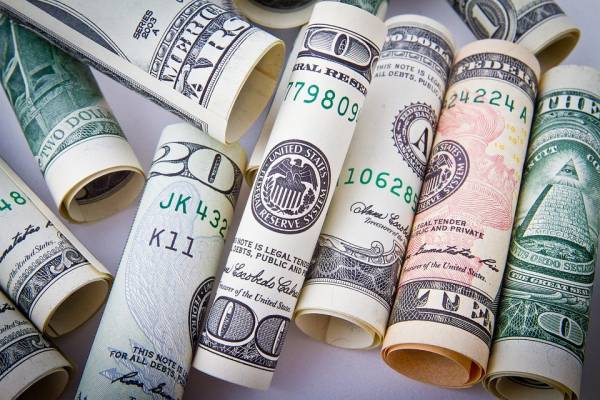 Now on available cash reserves, the leaders of ISIS through a third party to acquire a variety of legitimate businesses (companies that produce electronics, automotive companies, private hospitals and food industry companies) and intermediaries pay a monthly salary. Those, in turn, share with their partners of state revenues from these enterprises.

Another way to launder money – buying U.S. dollars in exchange for Iraqi dinars. ISIS changes the money, or relying on the currency of the company, or owning them through a third party.

The organization in this way participates in currency auctions of the Iraqi Central Bank, which are held to stabilize the national currency. Auctions allow the Islamists to sell the huge cash reserves of the Dinar and to buy dollars on them.

What is important is whether the death of al-Baghdadi 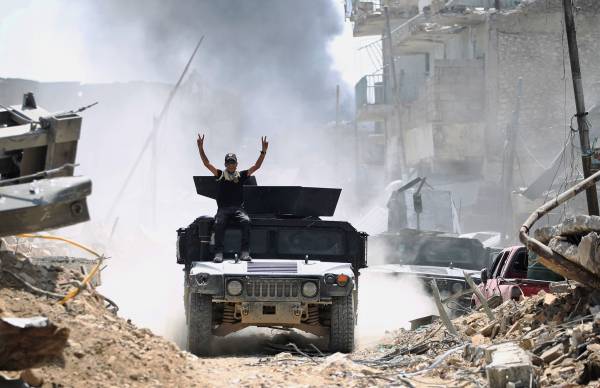 To cope soon with the “Islamic state” will not help and the elimination of the leader Abu Bakr al-Baghdadi, who could have been killed during the bombardment of Raqqa, the expert believes Foreign Affairs Colin Clark.

Nevertheless, the loss of Baghdadi may lead to internal split in LIH and enable al-Qaida to launch a process of voluntary or forced reunification. In addition, the death of the leader would be a symbolic victory for those who fight with the Islamists. However, the end ISIS it will not be, because the group has repeatedly lost senior leaders in the past, said Clark.