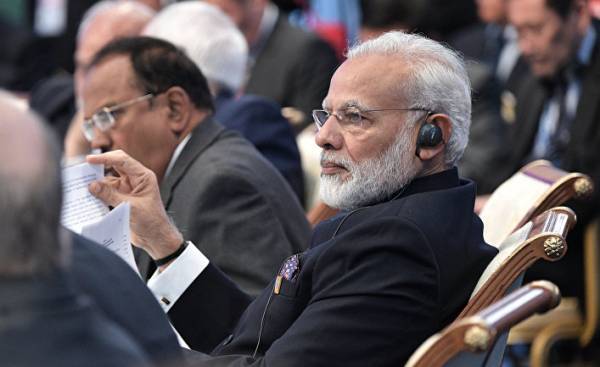 While the United States was plunged into internal disputes about the government of trump, and the European Union focuses on solving their own pressing problems, such as nationalist populism and Pexit, Asian power and Russia is busy creating a new geopolitical architecture — development of the structures that would reflect the growing power of these countries at the regional and global arena.

In the present context, countless multilateral forums and global projects significant event of the current month was the joining of India and Pakistan in the Shanghai cooperation organization (SCO), which involves political, economic and military dialogue between its members, led by Beijing and Moscow.

We are talking about the first expansion since the establishment in 2001, that indicates a serious intention of China and Russia to strengthen its strategy and expand the zone of its action, in recent years, a limited historical spheres of influence of the two countries.

Old rivals, Beijing and Moscow at the beginning of the 21st century decided to create a diplomatic mechanism to regulate the competition for influence in the former Soviet republics in Central Asia such as Kazakhstan, Uzbekistan, Kyrgyzstan and Tajikistan.

So there was kind of an umbrella cooperation organization, which includes six countries, and China, who initiated its creation, was placed at the headquarters and thus further strengthened its position in Asia.

The slogans that formed the basis of the draft called for the unification of the allied governments in the fight against the “three scourges: terrorism, extremism, separatism”. This rhetoric is hinted at cooperation between authoritarian regimes, which are aimed at countering the terror or political opponents.

SCO marked the desire of Beijing and Moscow for concerted action in the strategic region of Central Asia, as well as to broader access to natural resources.

In recent decades China has shown a rapid growth in the region as an important buyer of oil and gas, as well as a powerful investor and exporter of industrial products in those countries that rapidly restored after decades of Soviet economic disaster.

While Beijing is moving closer to neighbors such as Kazakhstan and Kyrgyzstan, Russia seeks to maintain with these republics historical context: for decades they were under her control, which greatly weakened with the breakup of the USSR.

After securing the permanent members India and Pakistan, China and Russia leave the original logic of the SCO, mainly targeted at the solution of regional problems and getting rid of American competition. Now we can talk about strategy on a continental scale, the diplomatic space to strengthen dialogue and cooperation between the Eurasian giants.

The Russian-Chinese initiative is of interest to countries such as Turkey, Iran, Egypt and Israel. Traditional influential figures of the transatlantic bloc, the US and its European allies should pay particular attention to the emergence of the Eurasian geopolitical architecture. It is an undeniable sign of the 21st century.