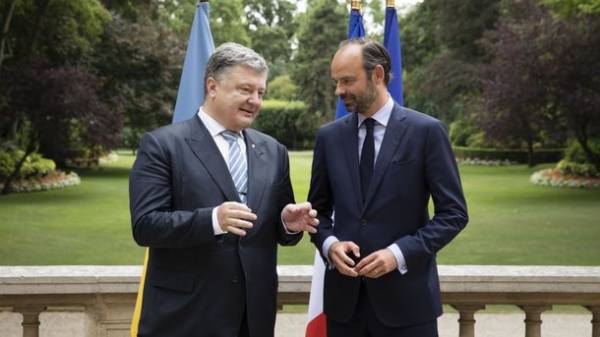 During his visit to France, President of Ukraine Petro Poroshenko met with the Prime Minister of the French Republic, Eduard Philip. About it reports a press-service of the President.

The head of state congratulated Philip on his appointment as the head of the French government and the formation of a new government team.

The sides discussed the ways of intensifying trade and economic cooperation between Ukraine and France. The two sides agreed to intensify the activities of the Ukrainian-French intergovernmental Commission on economic issues.

Poroshenko and Philip discussed the prospects of French companies on the Ukrainian market for renewable energy development. The President of Ukraine drew attention of the Prime Minister of France on the threats that will entail for Europe’s energy security, the project of gas supply to the “Nord stream-2”.

Philip noted the depth of the Ukrainian reforms, which, according to him, contributes to the improvement of the investment climate in Ukraine.

The parties also discussed the development of the situation in Donbass in the context of Russian aggression and the state of Affairs with observance of human rights in Russian-occupied Crimea.

We will remind, President of Ukraine invited a group of French senators to visit the Donbass.