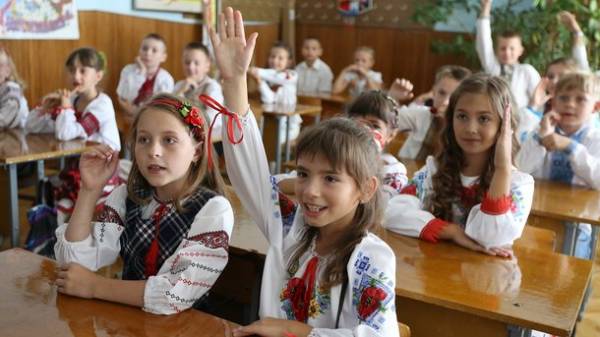 I don’t know who in the days of my childhood watched, to every student of the class was involved in social work — the state, the school, the Komsomol district Committee or a homeroom teacher. But in my Soviet past, the apprentice was bound to be, if not a chief or commander, or at least a florist or a librarian. Some aspects of this involvement in public life and migrated to schools in the independent Ukraine. But, as always, took a most unusual form.

Now you can find the most unexpected positions — for example, in one of Kiev schools well the warden and the leader of the class (a different post) and the other with the President, Ministers and their deputies. On the school website published the “Regulations on elections”. For example, on the website of Zaporizhzhya Lyceum “Logos” the “about the candidate” read that “to nominate his candidature for the post of President are eligible students in grades 8-11 who meet the following requirements: show a sufficient and high level of achievements; to comply with the rules for students; possess leadership skills; enjoy a good reputation among classmates and teachers.”

It would seem that there’s government. But often it becomes a stumbling block and bone of contention in the team. So, some parents say that these elections have divided the class: the mayor was imposed by the class teacher only because she is the daughter of the head of the parent Committee. And many children are ambivalent about the posts (very difficult “to have authority” at the same time with classmates and teachers). So, the Odessa schoolgirl Ekaterina Sinkova believes that their mayor sets a bad example: it is “lame” behavior, and “power was given” it is only because of the status of the parents. “Today” figured out, what is the government in our schools and what is its role.

ALL DOCUMENTS ACCORDING TO LOCAL REGULATIONS

Who is governed by such a government in our time, is difficult to know. Mont on this account the guidance does not.

“I have not seen any legal document about the elders. So this is local escapades”, — considers ex-the uceqa Director Ihor Likarchuk.

“This is generally a relic of the scoop, originating in model rural communities. Although we have a school Council and Court of honor, but this is different. We ideology — democratic school (like Summerhill) and even are members of EUDEC (European Democratic Education Community). In addition, we have no regular classes: we work with a dynamic educational groups, so some of the appointed “chief” can not be. But every child can go to Court honor and to defend its right there, if it considers that they are violated”, — the Director for strategic development at private school “Athens” Alex of the Greeks.

“We have everything organized at the school level. And I like that now the children are not called “elders” and “leaders” and “Ministers” — says mother Eugenia Dnipropetrovsk sixth grader over there Antoshkina. Is a good example of self-government. For example, a task my daughter to follow the magazine to inform children about the replacements. Every Monday the leaders collected at a school-wide Assembly where they talk about events that should go away within weeks or months.” The views of parents on the question elders were divided — depending on experience and age of the child. Modern adults are more sensitive to the relationships in the group and place their child in it. Many believe that in elementary school in the position of elder, leader, etc. there is no need:

“Elder elementary school is a Snitch! This instruction teaches the child to follow classmates and to inform on all to the teacher. And because children at this age, poorly distinguish the good from the bad, then regurgitate everything you hear. As a rule, is at the hand of unscrupulous teacher: not working with each child individually, it is possible to know everything about everyone. What’s the benefit to the child of the headman? The only one hurt, because this position teaches students podozritelnost, slander and denunciations. Parents should try to protect their children from such orders”, — said the member of the group “SOS Papa” Irina Ishchuk.

And the parents of students see this as both positive and negative aspects: many consider that such a position teaches a child the responsibility teaches him organizational and leadership skills. But the “record attendance” needs of the teacher and not the children.

ASSISTANTS. “It’s really teacher assistants, — tells mother of the Kiev student of the 7th grade Irina Omelchenko. The chief keeps order, wearing a magazine, eating lunch, etc. and the leader of the class enshrined in various activities: he recalls dates, defines the roles in some events. We have themed projects, which each child makes over a period. Or, for example, we have left the boy to another school — he beautifully said goodbye, gave him a draft on the memory of the class: shared photo, different wishes, etc.”

THE OPINION OF THE PSYCHOLOGIST

“If the class has more than 16 people, the leaders of the class is necessary, — considers the head of the “Center for the early detection of children” Alexander prima. — A man scans, collects and expresses the pedagogical group consolidated understanding of the wait class. On the other hand, it relays, outputs information, request, norm corridor from the teacher in class. But this person may not be appointed as a teacher. In him, his nature, his genetic potential should be the prerequisites of the relevant qualities — the ability to hear and authority to Express and to convey. If you look at this task through the lens of Human Design (the direction of self-development), the rave-map child the map of its life forces and energies should be specific activation in the leadership channels.”

PRO. As elsewhere, there is the human factor, which any good idea can be reduced to an absurdity. “In our class came the teachers, psychologists and testing for lead. Found out kids no one wanted to be friends, and at a General meeting called the names of outcasts and heroes, that, in General, it was common knowledge. And then you tried to boast faster and louder, it’s so easy and quick to identified,” — says the girl from the town of Larissa Lukyanenko.