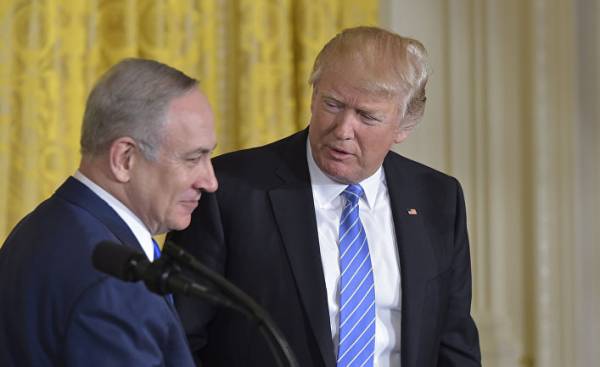 During the recent visit of Prime Minister of Israel Benjamin Netanyahu to the United States Donald trump commented on the desired resolution of the conflict in Palestine. After that, most of the American and European media erupted with criticism of trump, due to the fact that he has not expressed support for any of the parties. Many observers and authors think this is a dangerous precedent and irresponsible position on the issue of resolving the conflict in Palestine. At first glance, this criticism and condemnation do not seem to be something unexpected, because Donald trump has not confirmed the traditional position of the United States about the desired resolution of the conflict, and left the question open, saying he would accept any solution which will take part.

But, as I wrote, it seems at first glance. This criticism and condemnation require explanation, to find which fails. The fact that Donald trump didn’t say a single word about the real policy of the United States as well as European or Arab countries. And it is commitment to the idea of the coexistence of two States, but only. Meanwhile, the Zionist project in Palestine continues to operate at full capacity, gradually taking more and more land, whether in Jerusalem or the West Bank of the Jordan river. Comes to what many now believe that the decision on the coexistence of the two countries is already final, especially in light of the growing influence of right-wing in Israel, which affected the distribution of seats in the Knesset, and then in the government. In the past we have heard statements of some responsible persons in Europe and America over land transactions in Palestine. It was said that such measures “do not help “the peace process, or what they “complicate” the pursuit of conflict resolution. These statements were so weak and quiet that had no effect on the Zionist project in Palestine. You could even say that they sanctioned the project, as the statements were not accompanied by any real pressure on Israel. Israeli politicians are well aware of this and understand that these statements are only a cover. They are spoken only to the United States and European countries did not abandon its position in the settlement of the conflict.

The question arises, how to interpret this criticism facing Donald trump when he announced his refusal (in words but not in practice) the position taken by the United States and most European countries? What is the significance of this oral position when there is a huge glaring difference between it and reality? Why continue to talk, but do nothing in reality? This question remains unanswered. This also applies to the latest resolution of the UN Security Council No. 2334 concerning Israeli settlements. The US abstained from the use of the veto. Why the US and European countries are so eager to constantly declare its position in the absence of real action and pressure the state of Israel, which is just not committed to the regime of coexistence of two States on the same territory?

In my opinion, to questions the following answer. As for the last hours of the administration of Barack Obama and the decisions of the Security Council, in part, this may be interpreted as a desire to settle scores with Prime Minister Binyamin Netanyahu, who openly opposed Barack Obama. I say partly, because the United States is a superpower that has economic and strategic interests in the region and other parts of the world, and they are required to have a certain stance on various conflicts, including in Palestine. The recent suspension of world politics is determined by various factors, but you need to understand that it imposes restrictions on the real political action, in particular on the Palestinian issue. As an example, in the case of the Obama administration, is the situation confronting Israel and its supporters in the United States and the Iranian nuclear dossier. With the latest from the very beginning it was clear that this will drain the internal political factor of the Obama administration. They succeeded, but it was only with great difficulty.

The Palestinian issue concerns the European countries with the imperialist past, still having interests in the region. To date, in relation to the conflict in Palestine, they were hiding under the wing of the United States, as did many Arab countries. They must all have a certain position in this conflict. But most importantly, the resolution of the Security Council first and foremost aims to represent the position of the coexistence of two States, regardless of whether it will actually bring to life. In case of absence or change of this slogan, it is unclear what will be the position on this issue. The idea of the existence in Palestine, a single state is not possible due to categorical refusal of Israel. Each foreign government has its role in the region, which is why they need the opinions to resolve conflicts, not only in Palestine but also in radio other Arab countries. Thus, the Security Council resolution was only a Declaration of their position, not the solution.

I now return to the criticism of trump’s statements, when he not only has consented to the idea of coexistence of two States, but also refused in General to solve this problem. What’s worse, he said that he had no particular position and he will accept any decision to which the parties by mutual agreement. The key here is that trump in these statements showed that he kind of refuses to a potentially preferred position for America, Europe and the Arab countries, even if it was possible to realize due to the lack of effective pressure on Israel.

Criticism of trump and his statements in the American media stems from allegations that he abandoned the position on resolution of the conflict that existed for decades. In fact, the statements associated with the desire to be free from verbal position, and not from the real. And trump said that he would accept any agreement between the Israeli and Palestinian sides, which means that the scales tilt in favor of Israel — he agreed that Israel agree. This is the real position of the United States, and not something that remains only in words.

Thus, the “mistake” on the part of trump to say that this is a real position of the United States and European countries. Not surprising if within the next few weeks or months there will be a fix for this “error” that trump made due to the lack of political experience.