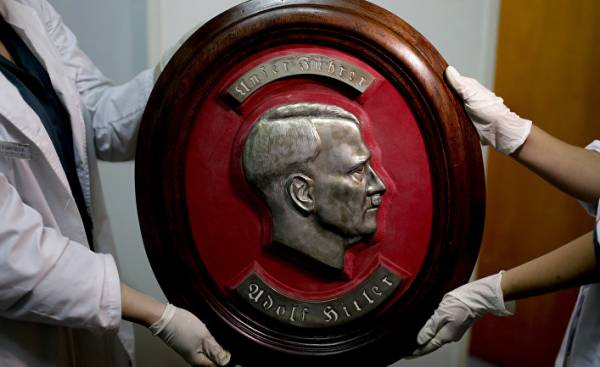 Supporters of conspiracy theories always knew about it: Adolf Hitler and Eva Braun were able in 1945 to flee from the destroyed Berlin in a submarine to South America and start to build a new life in the underground Hacienda about a thousand kilometers from Buenos Aires. This has helped them a huge Nazi network, a secret organization ODESSA (“ODESSA”) (organization of former SS officers), which provide shelter to many Nazis from senior management and provided them with financial support. Sensational discovery of a collection of Nazi artifacts discovered by Argentinian police in a suburb of Buenos Aires, may serve as another confirmation of this for its adherents.

Behind a hidden sliding door in one of the apartments in the North of Baccara were detected in a total of 75 items, a collection of busts and portraits of Hitler, decorated with swastika, silver beer mugs, figurine, eagles of the Reich, pistols, daggers award, labial harmonic, binoculars and magnifying glass, and equipment designed, apparently, to measure the circumference of the skull, and used in Nazi racial studies.

“The first results of the research indicate that this is the original,” — said at a press conference the Minister of security Bullrich Patricia (Patricia Bullrich). Discovered the photos, which depicted Hitler with some of the items that are often used by traders in the black market to prove the authenticity of their products and assign a higher prices. This mostly indicates a criminal background than ideological.

However, the President of DAIA (the”Delegation of Argentine Jewish associations”) Ariel Cohen, Saban considers this the biggest discovery of the Nazi art in Argentina is different: “These items are irrefutable proof that high-ranking Nazis found refuge in Argentina.” Argentine media said that Hitler busts and statues of eagles of the Reich imported to Argentina Adolf Eichmann (Adolf Eichmann) and Josef Mengele (Josef Mengele), which again recalls the mysterious organization “ODESSA”.

On its activities remembered again in 2014, when the declassified FBI files surfaced written in 1945 a letter from a “friend” to the Director of the FBI Edgar Hoover, in which was discussed about Hacienda Hitler in Argentina. But additional evidence is lacking. Instead, constantly are the known facts about the Auschwitz doctor Josef Mengele, “the butcher of Lyon” Klaus Barbie (Klaus Barbie), the SS officer Erich Priebke (Erich Priebke) and about Adolf Eichmann. Head of the Gestapo in the Main Department of Reich security, is responsible for the final solution of the Jewish question, and the organizer of the Holocaust led a quiet life under the name Ricardo Klement (Riccardo Klement) in Buenos Aires, while in 1960 he was kidnapped by agents of the Israeli intelligence service Mossad and taken to Israel.

All of them managed to escape to South America, no thanks to the help of the world secret organization, the SS, and the well-known “rat” tracks, as this was confirmed by the Austrian historian Gerald Steinacher (Gerald Steinacher) (“Nazis on the run”). Josef Mengele at first hid in his home town of Günzburg. Under a false name he got to South Tyrol, where he was posing as “Volksdeutsche”, ethnic German who was neither German, nor Austrian nor Swiss citizen. The international Committee of the red cross (ICRC) issued him the certificate and he was able to travel from Genoa to the New world.

“The plight of thousands of refugees and the inability and unwillingness of the international community to provide assistance to the exiled representatives of the Volksdeutsche, allowed the Red Cross to continue to provide assistance,” writes Steinacher. In many cases, refugees could present the Red Cross a letter of recommendation from the Vatican. These letters were given not only for humanitarian reasons. The Croatian priest Krunoslav Franciscan, Draganovic (Krunoslav Draganovic) and the Austrian Bishop Alois Hudal (Alois Hudal) built a real network — a Bastion against communism — they provided the Nazis a refuge and arranged for their transfer to the courts. Sometimes US intelligence agencies also used these so-called rat trails, to ferry technical experts of the Nazi regime or their employees.

Not by chance, most of the Nazis moved it to Argentina. The authoritarian President of Argentina, Juan Peron (Juan Perón) was a fan of Hitler and wanted to help German scientists to modernize his country. In the 30 years of the German Diaspora of the country sympathized with the Third Reich. Now the refugees without asking questions about their past, easily opened all the doors, both from the authorities and from society. Doubt the assumption that they’re starting a new life, could take risks, bringing with them and showing Nazi artifacts.

The news Agency of Germany points to another connection between Germany and discovery in Argentina. Many of the items marked with factory mark founded in 1865, specializing in the production of army knives of enterprise Eichorn Karl (Carl Eickhorn) in Solingen, among them the statuette of an eagle with a swastika on marble pedestal. Also, Eichorn engaged in the production of cold arms for the SA and the SS.

The name of this brand and today remains a household name, the company is the successor of the stresses in his description of the Internet: “whereas Eickhorn-Solingen supplied state of the market is almost exclusively bayonets, combat and rescue knives (…), now the company would like to hit the civilian market with innovative designs of knives and cutting products made with the latest technology.” Does this track to the original owners of Nazi treasure from Buenos Aires, however, remains a question. As the question will be whether the brands tested for authenticity.

Further investigation was taken by the specialists from Interpol. When it is completed, 75 Nazi artifacts will be available to the public. “We hope to soon send them to the Holocaust Museum in Buenos Aires,” said Minister Patricia Bullrich.