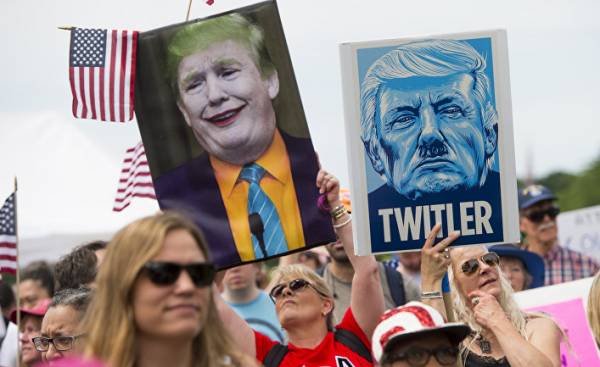 The media started talking about the sensation, which was their performance on the MSNBC democratic Senator from Connecticut Chris Murphy (Chris Murphy). This liberal legislator said that the party elite from Washington spent too much time “such as Russia”, and not relevant to the policy issues that concern his voters.

In recent weeks, the radical idea of a “Russian puppet”, which is so persistently pushing the Democrats and the media, suffers a serious failure. Analysts from among the centrists warn that things have gone too far and should stop; and a rapid stream of leaks about the contacts trump with Russia begins to dry up. The investigation, which talks so much press today focused on figuring out whether trump was acting in relation to the investigation hasn’t produced convincing evidence.

The truth is that Democrats are fixated on the attacks on Russia for one simple reason: such attacks cast doubt on the legitimacy of the victory of trump, and it helps to heal the wounds from the unexpected defeat of the Democratic party. But although the Russian hacking hacking servers of the National Committee of the Democratic party is a very serious issue, such actions do not invalidate the voting results, and evidence of involvement in this case there is no trump.

The Democrats should settle down and become a serious opposition party. The country will only get worse, if only one party will act uncontrollably. Instead of constantly tormented due to the fact that their candidate proved to be extremely incompetent and could not defeat a novice in politics, the Democrats should return to their duties and engage in the governance of the country.

This means that whenever possible, they should cooperate with the Grand old party, paying close attention to the political shortcomings of their opponents. The hurry and secrecy with which the Senate considered the bill on affordable healthcare, for example, must be subject to political trial. But instead, the democratic apparatchiks in the morning until the evening digging into what the mistakes made on television, lawyers for trump discussing his tweet about how he is or not is under investigation of the special Prosecutor for the dismissal of FBI Director, refused to say publicly that against him the investigation is not conducted. Can you blame the country for what she refuses to listen to this rubbish?

We in any case do not want to say that the investigation in Russia has got to stop. If after all that has been said, after all the accusations of would be that there is no conspiracy was not, the administration trump and primarily the Republican party will want to read the comprehensive report, which will rehabilitate them and restore their honour and reputation. A crazy obsession with Democrats on this issue is not only politically counterproductive and self-destructive. It harms the foundations of our society. And it is good that a prominent member of the Democratic party realized this harsh reality. It’s time for others to Wake up.