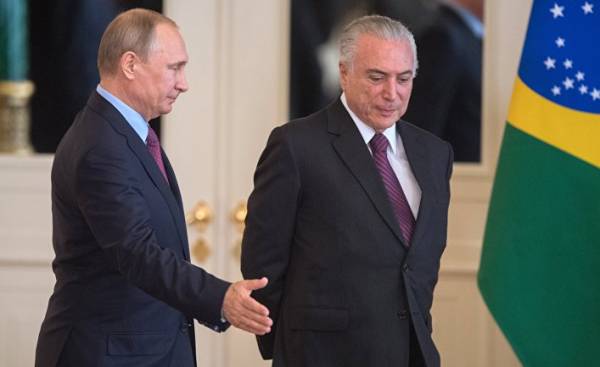 South American “giant” lost a considerable part of the confidence in the result of which left him an unprecedented economic crisis and endless corruption scandal.

Ignoring the impending court threat, the President of Brazil Michel Temer went on June 19 with an official visit to Russia. The evening of June 20, he appeared with Vladimir Putin at the Bolshoi ballet.

The head of state will return to the Cabinet of Brazil on 23 June after a short stay in Norway. All of this was a demonstration of international activity determined President who wants to show the world that his country did not fall into a stupor, and that, despite protests and disappointment of the citizens on the background of the endless corruption scandal as a result of operation car Wash, Brazil was not the infamous “banana Republic”.

Wasted effort. Objasnuva in escalating moral crisis the country was faced with almost complete ostracism in diplomacy. “What a powerful head of state paid a visit to Michele Temer after his inauguration a year ago? No one except the Spanish Prime Minister, who is also accused of corruption. In Latin America, Europe and the USA no one pays attention to Brazil. The country became a pariah,” says former Supreme court President Joaquim Barbosa (Joaquim Barbosa), which aims in 2018 to participate in the presidential elections from the green party along with Marina Silva (Marina Silva).

Harsh words on the part of Brazilian intellectuals who bitterly recalls the period of the greatness of Brazil. That was the blessed era of Luiz inácio Lula da Silva (2003-2010), a former Metallurgist who became a star of the international arena, a friend of George Bush and a friend of Hugo Chavez, the object of admiration of Barack Obama. Then the grown up in the flow of oil the nation was in the leadership of the WTO and the FAO, had achieved the right to host the football world Cup (2014) and Olympic games (2016).

A colossus with feet of clay

“Apparently, God is tired of Brazil. And left us,” wrote on 7 June, former Minister of Finance and Ambassador to France Antonio Delfim netto (Antonio Delfim Netto) in Folha de Sao Paulo, denying thus the popular saying that “God is Brazilian”.

Star of the Latin American colossus rolled under a load causing a big controversy of the impeachment of the former President from the leftist Dilma Rousseff in 2016. Supporters of the workers ‘ Party called it a “coup d’etat”.

The recession and worthy of a second-rate film corruption scandals, which reached even to the head of state Michel Temer, only accelerated the fall of the country into a ditch.

Released 24 may in the Argentine newspaper La Nacion article “car Wash” shows the weakness of the colossus” dear in Buenos Aires, the political scientist andrés Malamud (Andrés Malamud) recalls the blatant absence of Brazil in Bogota on 26 September 2016 at the signing ceremony of the peace agreement between the Colombian government and the Revolutionary armed forces of Colombia. It was about the historical for the region event, which brought together many heads of state.

The expert concludes that Brazil has neither the financial resources nor the moral authority to be the leader of Latin America: “both the country and the people gain power in three ways: power, money and charisma. (…) One time, it seemed that Brazil has all these trump cards. But it was an illusion. Financial resources drained away by corruption and the rest is simply not there”.

Although the misconduct of the Brazilian political class, of course, affected the attitude to the country, the weakening of its positions in the international arena is the result of political will. To replace the former trade Union leader Lula came economist and technocrat Dilma Rousseff, who has never experienced a thrust to international Affairs, thereby irritating some diplomats.

Started in 2014 the unprecedented economic crisis has only strengthened this attention to internal issues. Offset Rousseff in 2016 with adoption in its place of the Vice-President Michel Temer has not led to a change in this trend. This is evidenced by the appointment of the Minister of foreign Affairs josé Serra (José Serra, resigned from the government in Feb), who in an interview in September 2016 could not be called BRICS (Brazil, Russia, India, China, South Africa) thought that the group includes Argentina.

In Brazil this is not the first time. Historian of LIUs Felipe de Alencastro (Luiz Felipe de Alencastro) recalls that after the Second world war were on the side of the allies the country was promised a dizzying rise. “Brazil recognizes the sixth great world power?” — wrote Le Monde on 24 February 1945, when the fate of the country have not crossed the government’s mistakes and the cold war.

Because of their size and resources, Brazil can quickly regain its status as a significant player in the international arena. In addition, the Organization for economic cooperation and development is planning to invite her to the “club of the rich”. It remains only to restore order in politics.