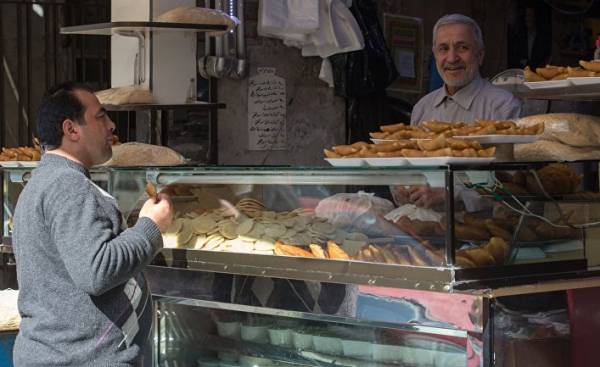 The memory of the inhabitants of Damascus dies, especially when it comes to memories of the days of the Holy month of Ramadan. In recent years, the town has a particularly spiritual atmosphere, and modern technologies do not distract the inhabitants from performance of such rituals and customs, as for example, the reception of guests. Nostalgia gives birth to memory and the comparison with the past.

Residents of Damascus enjoy a rest after the working day, and the meal serves as a reward for good work and sincere intentions. However, you cannot forget that many residents of Damascus are forced to change their habits in the month of Ramadan in connection with the rising cost of living against a backdrop of years of aggression.

Nothing in Damascus does not speak about the war for a few hours before evening prayers the streets of the city come to life, the markets are beginning to boil with life, people everywhere rushing to buy everything you need for the day and Breakfast. In a crowd in a hurry it’s easy to get lost and lose money. 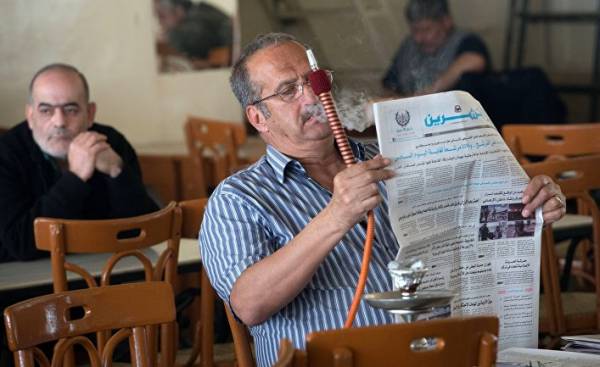 Damascus is famous for its cuisine, full of dishes, various sweets and drinks here and they sell in bottles.

Ten-year-old boy Jihad takes a plastic bag, thin bread and imposes on him the sweetness similar to honey. He doesn’t remember his father. He died when the boy was only two years old, but the mother’s tears always remind him that his father, an officer from the city of Idlib, killed unbelievers. They staged the ambush when he was returning home and killed him for the sole reason that he refused to leave the Syrian army. He died a Martyr’s death, leaving a wife and two children.

Honoring the memory of his father, whom he saw only on pictures, Jihad persistently studying and working. Around a lot of children who also have something to sell on the street. Before the Jihad, a queue of customers, most of whom had heard his story. They decided to always buy from him, perhaps, to somehow share the grief that never leaves his baby face.

Jihad says that one of his relatives took him to his work, thus he could help his mother and sister after his father’s death in Idlib. He says he’s extremely happy when it brings the day’s earnings to his mother, which she spends on buying everything needed for home and school. The latter are near the shelter for displaced persons, which is engaged in the distribution of aid, which the Syrian government collects for such families. Touting their wares, Jihad said that it is similar to sherbet with orange and raisins, which is great for an evening of breaking the fast and Sahur in Ramadan. People are buying this sweetness because it is useful and affordable to the poor. But buy it and more wealthy people. © RIA Novosti, Ilya Pitalev | go to photosangelina on the market in the Old town

In the queue people are trying to make it count how many rings Abu Ahmed throws in a VAT for frying. Answering the question about popular in Damascus delicacy which he serves, Abu Ahmed says with a smile: “Yes, it is true that his poor buy, but it is very tasty, so they do not need to walk in the luxurious pastry shops, which are visited only by the rich. We know what suffering you have to go to the Syrians, so we’re trying to find the best way in order to please them, nobody obschityvat and at a reasonable price. However, when we come to the elderly or the poor, we take an amount equal to only the item cost more money to take with them, we can’t.”

In Damascus there are over two hundred known types of sweets with different nuts, such as pistachios, almonds, pine nuts. Many of them are very expensive, and Syrians are buying them for the celebration marking the end of Ramadan and during the month limited to cheaper.

Teacher Mind Jalal invited us for iftar, happily meeting us at his home, located in the famous quarter of Damascus al-Maidan. Across the room the smell from the pan with a dish (leaves stuffed with meat and rice), racking up all hungry. Everyone was waiting for the evening azan that would allow them to make tasty food: soup, “koubba” (fried balls of meat) and fresh vegetables. It quickly pass each other pitchers of drinks, Indian dates and special sauce, without which no cost, no family in the month of Ramadan.

We asked Um Jalal, what dishes she usually prepares during Ramadan. She replied that it was a stuffed goose, rice with beans, maklouba with eggplant and shish kebab on the grill. This woman read in our eyes a surprise because we didn’t know how this modest family manages to cook expensive meals when the country is in difficult economic conditions. The family can hardly afford daily household expenses. She read our minds and found the best answer: “In the Holy month of Ramadan everything must be different, he comes to us once a year, and we should be willing to receive all the best at this time, because this month we get God’s blessing. The more we spend to help the poor and yourself, the more benefits It gives us, so we don’t deprive ourselves of delicious food”.

To the historic cafe “Fountain” we go in, accompanied by Abu Jalal. Sixty-year-old man remembers, what were the religious traditions a few decades ago. When he was a child, his father would take him by the hand and led to the famous cafe which we witness stories about the bloody battles between the characters of the novels and folk tales. 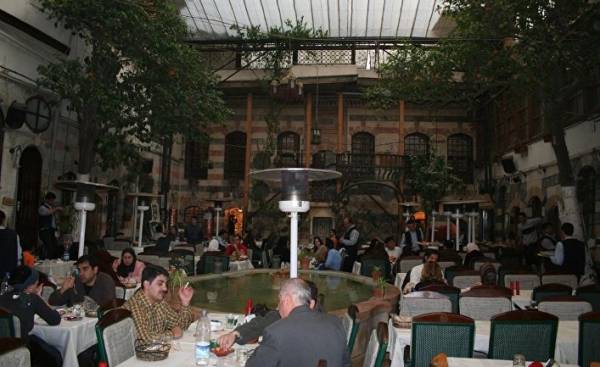 In this cafe you can meet story-tellers and listeners, we asked the storyteller Abu Ahmed, why is it a “profession” became popular again. He said, “no matter How evolved the technology, many people want to plunge into the past, to feel the spirit of bygone times. So after the evening breaking of the fast, they take old books and come to this cafe, which, like hundreds of years ago, many visitors who find here what you can’t give any technology.”

He continues: “There are books, like the story of king Zahir, which I carry with me more than a year, and I read them to their audience and find it a great response”.

Each image in a cafe “the Fountain” talks about knights in the past, but they have not left the hearts of its fans. However, the walls of the old buildings bear the imprints of the other battles taking place on Syrian soil, and, perhaps, not yet born the storyteller who tells about the war. 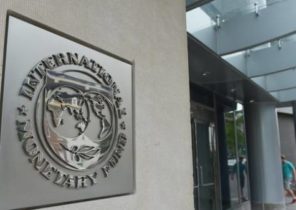