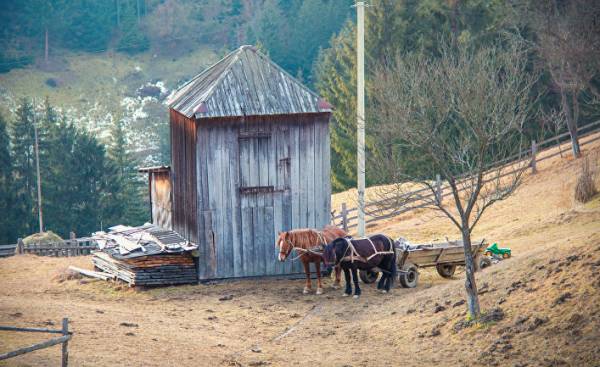 This place — it lacks only Emil. But Lonneberga present.

It is in a small town, this place it occurred to me that Ukraine is different, including the one that stinks not the violence, corruption and misery.

I was driving along the highway E50 that surface (for the third time in a few years) to visit the Ukraine from the South to the North. The road ran through the Western part of the country, on the Eastern slopes of the Carpathian mountain range, covered by deciduous forests. To the South stretched the Hungarian Puszta. To the North is Belarus, with its birch forests.

It was impressively beautiful and peaceful. Nature and the Habsburg architecture of the castle, standing high on a cliff. The boxes with flowers and beautiful women in headscarves made me think that I’m lost. Have I landed in Tyrol?

Carts pulled by horses, just like in Lenneberg, creaked along the highway E50 by colorful altars, out on the sidelines. They rode long trucks of the most modern kind. Every two kilometres — an elegant newly built gas stations, which with their low prices attract buyers from the neighbouring Western countries, Slovakia and Poland, despite the fact that the border in each direction have an hour to stand in line. Mobile phones worked. In the outdoor bar at the hotel took American Express.

And it is in Ukraine!

The country became independent only in 1991. In the course of history she was constantly bullied and tormented successive Russian tsars and Polish kings, and perverted dictators-murderers Stalin and Hitler.

Hitler rules it as the Reichskommissariat Ukraine. Historian Peter Jonsson (Peter Johnsson), who wrote the book “Ukraine a history”, says how it differs “from those of Russian and Soviet boots, who repeatedly trampled the Ukrainian land.”

The country was split along religious lines — the Greek-Orthodox East and the Catholic West. National groups there were many Ukrainians and Russians, Tatars, Jews, Cossacks, poles and others.

First, a big country. In size it is like half of Sweden. And lives in her five times more people than in Sweden.

So there is enough space for several. And they are different.

There is a place for the Crimea, a large sub-tropical Peninsula in the Black sea, which Russian President Vladimir Putin freely — the Western world only in amazement at all looked — stole from Ukraine three years ago. Celebrating the Russian annexation, planning a 20-kilometer bridge that will connect the Crimea with the Caucasus region.

There is a place for the coal-rich Donbass region from the Eastern border with Russia. There in 2014 is a sluggish war for “independence” with Putin supported rebels who declared the Donetsk people’s Republic, and the population is apathetic. War absolutely no coverage in the international media. But got there the Economist magazine, which described the local mood: “I am against all, said Lyudmila Prikhodko…” 10 thousand people were killed in the conflict.

There is a place for the capital, Kiev, where the revolution on the Maidan kicked out the corrupt, Russian-backed President neglected the will of the people, who wanted rapprochement with the EU, instead of “sell” to Putin. With the new President this convergence is a fact: this summer, the Ukrainians for the first time in my life, going to Schengen countries without a visa. Finally they are Europeans! “Russians in Putin’s Kingdom will envy to look at them,” recently wrote in The New York Review of Books.

The revolution was the result of an aversion to corruption in the country. Success in combat over the last three years was small. In Ukraine there are still no reforms. Future oligarchs are trying to subjugate more and more parts of the country. I often saw them clean-shaven head in the SUV Lexus. They were accompanied by girlfriends — dyed blondes in short skirts.

That’s why part of the Swedish left-wing intellectuals and Putin’s agents in Stockholm believe that Ukraine is a suitable target for their spitting. Before they despised the Baltic States and mocked them; especially famous for the assurance of the Minister of foreign Affairs, the Wall Andersson (Sten Andersson) about the fact that these three countries were never under Soviet occupation. The Baltic States long described with the same brush as a bunch of Nazis.

All this talk stopped the recognition of their position as a full-fledged, absolutely pure members of NATO and the EU. The place of the Baltic States took left created the image of Ukraine, whose people are supposedly consists of drunken Nazis and homophobes.

But in Ukraine there is a place for a remote idyll in the style of Lennebergi — in the Carpathians. The local population is another one of those romantic, vibrant peoples who flood Europe and make this part of the world ethnically unique. This is the Hutsuls, who had long been semi-nomads and a bit like the Romanians.

They define the popular culture of the villages in the river valleys at the foot of the snow-capped peaks of the Carpathians, which reaches a height of two thousand meters. If they are Catholic, go to mass in the wooden Church and if the Orthodox Church with the big Golden domes. They have mastered the crafts — handy with wood, brass and fabric.

One night, under the neon sign soupstrainer cafe on the banks of the river sat a thin, elderly white-haired Hutsul. Sipping from a glass of pear vodka, he replied:

“Why are we so different? This is the explanation. We’re just very far away. Soviet communism here and not get”.

Staffan Heimerson — international journalist, author of many books. Lives in France. Debuted in the newspaper SvD in the fall of 2016.

The submarine, passing along the coast of Finland, has become outmoded