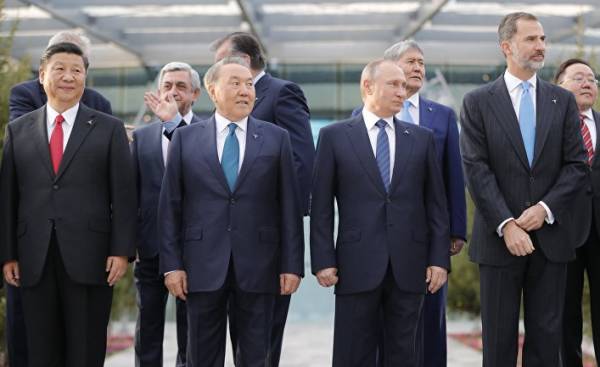 While Washington is dealing with the unconvincing testimony of the former Director of the FBI James Komi (James Comey), puppets of the shadow government in the United States, dismissed by trump, against which acts a significant part of the bureaucracy, the world is changing rapidly. Space that away from the influence of the United States, is instantly transferred to the other players, and the former superpower itself is in marked decline and a state of civil war, although no one dares to say it openly.

Fully held by the Western media, the Shanghai cooperation organization (SCO) held its 17th summit in the Kazakh capital Astana. This country has become a bridge between China and Russia. Boycott the Western media looks childish, when at the last meeting it was announced the admission of India and Pakistan, which was the most significant event after 16 years of its existence.

India and Pakistan (the first country is Russia, and the second supports China) — two of nuclear power’s medium-scale, between which three times broke out the war with conventional weapons. Earlier in the SCO six countries (China, Kazakhstan, Kyrgyzstan, Russia, Tajikistan and Uzbekistan), it is now eight, and four of them possess nuclear weapons: Russia, China, India and Pakistan.

It turns out that the SCO is gaining nuclear power, while NATO is bursting at the seams after the beginning of the presidency of the trump? SCO observer status are Afghanistan, Belarus, Iran and Mongolia, and dialogue partners are Armenia, Azerbaijan, Cambodia, Nepal, Turkey and Sri Lanka. On the waiting list are still ten countries, the question of the reception of which will decide China and Russia.

Will the Turkey out of NATO to join the SCO, closer to it in cultural and ethnic terms, and forget about a disintegrating European Union, and not Priya her into their ranks, despite all the promises?

For 16 years – the SCO was first of all the Central Asian countries, but now considerably expands its development on the Indian subcontinent (India, Pakistan, followed by Sri Lanka and Nepal), the Caucasus (Armenia and Azerbaijan), and even in Indochina (Cambodia).

Over the last 16 years the organizational structure and time schedule of the SCO was formed as the countries of this organization rejected the barbaric model of a unipolar world headed by the USA, that is evident in the desire of Iran to become a full member at this decisive stage of the construction of a multipolar world order.

Russian ideologist of Eurasianism Alexander Dugin is a staunch supporter of President Putin, compares aggressive unipolarity, multipolarity NATO and the SCO: NATO is dominated by one country and one ideology, whereas the SCO is composed of countries and forces that represent different civilizations with different ideologies and political systems.

Indeed, NATO represents a unipolar structure in which US dominion over the rest indifferent and indecisive countries, while relatively young, the SCO is characterized by pluralism and bipolar (in no way diminishing the importance of accession of India).

According to Dugin, “the SCO was not created as an Asian NATO, but as a Eurasian structure, the opposing of globalisation. Union major Asian States with enormous economic potential and significant strategic forces, is an important step in building a multipolar world”.

Dugin says bluntly: “the SCO is a multipolar unit, and it balances us and Western hegemony, makes the world model, which is uncontested impose, freedom. This gives new opportunities to the regional players of any scale.”

Russian ideologist of Eurasianism talks about the geopolitical nature of the SCO, considering the organization as opposed to the expansionism of the United States: “it will be a challenge that has no structure, the Western coalition or the unit can not win. If the SCO will formulate a coherent position on the fight against terrorism, it will mean the creation of entirely new atmosphere for resolution of the Syrian conflict. If SCO says ‘no’ to some actions of the West, then it will have to consider”.

I see a conceptual contradiction between the approval of economic globalization (not to be confused with financial globalization occurring at the sites of the wall Street and city), which praised the Chinese President XI Jinping in his recent speech at the fading economic forum in Davos, and hard confrontation Dugin of globalization. Later we will discuss this in more detail.

In my opinion, is the most significant event at the 17th meeting of heads of SCO member States in Astana was another bilateral meeting between Chinese President XI Jinping with Russian President Vladimir Putin to consider a more strategic Alliance.

Neither Putin nor XI Jinping did not miss the fact that the program of destabilization for ISIS (a terrorist organization banned in Russia — approx.ed.) developed in the geo-political laboratories of the USA and its edge directed to the Caucasus and Central Asia, bordering Russia and China, in the Xinjiang Uygur Autonomous region in the PRC with the prevailing accommodation of Muslims.

The heads of Russia and China discussed the difficult question of the DPRK, on the SCO’s role in the reconciliation process and reconstruction of Afghanistan, and the pairing of the new silk road (Chinese project) and EurAsEC (Russian project).

Putin accused the USA that they are behind the attacks by Islamic militants, something quite silent Western media.

Political analyst Rostislav Ishchenko also criticized the inability of the US and the EU to confront the terrorist threat emanating from the Middle East and Central Asia, to the detriment of the interests of the countries-members of SCO, when the ISIL militants seek to move their actions to the borders and into the territory of Russia, India and China. Neither Russia nor China can afford to let the terrorist gang that got kicked out of the Middle East, robbed of their borders. This may disrupt the new silk road project, and the community.

SCO provides the necessary format for both India and Pakistan have reached a new and more fruitful level of cooperation, overcoming past tensions and conflicts that play only the obsolete Anglo-Saxon unipolar world order.

Founded 16 years ago, at a meeting in Astana, the SCO has established itself as a dynamic and cohesive structure.

Long occupied a defensive position, starting with the slapstick of 11 September 2001 (later to wage war in Afghanistan and Iraq) and involvement in the destabilization of the dormant cells of the Islamists created by the eternal, the CIA, now SCO goes into an active offensive on the Eurasian space, which tried so hard to shake the late Brzezinski. And this offensive is inversely proportional to the decline of the unipolar world headed by the USA.