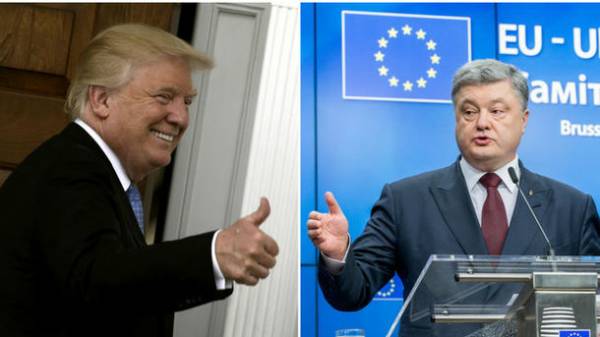 Though the official announcement of the presidential administration of Ukraine yet, the Minister of foreign Affairs of Ukraine Pavlo Klimkin confirmed that next week Petro Poroshenko will travel to Washington for talks with Donald trump. This meeting Ukraine persistently sought for five months. Initially, the presidents of the United States and Ukraine were to meet in February at the meeting of the UN security Council. But the date was constantly postponed. Later in the AP, even unofficially didn’t want to tell, how is the organization of the meeting of the two leaders, is constantly limited to a phrase: “We are working on it …”. The secrecy of the negotiation process gave an additional reason for the spread of rumors. Popular in Ukraine became the opinion, they say, first, Donald trump will meet with Vladimir Putin and then with President Petro Poroshenko.

For Ukraine, of course, was very important to stay ahead of the Moscow and first meet with the newly elected us leader. Although Russia also wasted no time lost. According to rumors, which periodically leaked to the press, the Kremlin literally attacked the White house, and the Russian media every time he announced a new date “accurate” Putin’s meeting with trump. In the end, it became clear that the leaders of the United States and Russia will hold their first talks at the summit G20 in Hamburg at the beginning of July. But trump’s meeting with Poroshenko, as Kiev and Washington was silent.

Even in this environment to sources “” in the Ukrainian dipkrugah unexpectedly announced that on June 19-20, scheduled for Poroshenko’s visit to Washington, where it will be the first meeting with trump. This is the undisputed “victory” of Ukrainian diplomacy, because at a meeting with Putin trump go already prepared. On the other hand, the information on Poroshenko’s visit to Washington came just before the vote in Congress of a law to toughen sanctions against Russia. But the main highlight of the project in the other. There amended, which prohibits Trump unilaterally repeal or weaken the already introduced sanctions against Russia over the annexation of Crimea and war in Donbass without the consent of Congress. Thus, the Senate and Congress outlined the new U.S. Administration red lines in the relations with Russia cannot be crossed, because the scandal with the Russian intervention in the US presidential election continues unabated. Therefore, as suggested by some experts, the meeting with Poroshenko trump will try to reduce the degree of tension on Capitol hill.

The Russian military aggression will dominate the talks between the U.S. and Ukraine. So, trump will be a unique chance to give a message to her critics in Washington, the rapprochement with Moscow behind Ukraine’s new Administration will not go. Although after the recent statements by Secretary Rex Tillerson at the hearing in the House of representatives I got even more confused. According to the head of the state Department, the conflict in the Donbas, Ukraine and Russia can resolve outside of Minsk in the framework of another agreement. The first Deputy Minister of foreign Affairs of Ukraine Vadim pristayko understand the words Tillerson so that “the possibility of the Minsk format is limited and all understand it”.

But about the new format, and new agreements out loud yet no one speaks. In an interview with “Today,” Vadim Prisika made clear that while Ukraine awaits the appointment of an assistant Secretary of state for Europe and Eurasia. This position was previously occupied by Victoria Nuland, who worked with Russia on the Ukrainian dossier through the Russian presidential aide Vladislav Surkov. He is called the architect of annexation of Crimea, separatism and the subsequent Russian intervention in the Donbass. Earlier “Today” reported that one of the potential candidates to replace Nuland as the Executive Director of the McCain Institute, former US Ambassador to NATO Kurt Volker.

Perhaps the talks in Washington trump will tell Poroshenko, when the state Department appears responsible for the dossier of the Ukrainian people, and who would. Because Kyiv, according to former U.S. Ambassador to Ukraine John Herbst, always was interested in the direct participation of States in the negotiation process with Russia. In an interview with “Today,” Herbst suggested that the talks with Poroshenko trump wants to reduce the degree of criticism and skepticism in the Senate and Congress, but stressed that this is not the main reason.

– Why do You think trump meets with Poroshenko before with Putin?

I can’t speak for the President of the trump. But it is true that we have very important issues that need to be discussed with Ukraine. It is true that the President trump has a political problem in Washington, which is associated with many strange relations of the members of his team with the Russian. Therefore, between the American and Ukrainian interests and between political issues trump we probably will find out the reason of this meeting.

It is interesting that the information on Poroshenko’s visit to Washington came just before the vote in Congress of a law that expands the sanctions against Russia. It has something to do?

– Well, it does only in the sense that the continued aggression of Moscow in Ukraine is an important political issue in Washington. Therefore, from this fact we understand why the sanctions were at the center of attention. And it helps to understand why so soon there will be a meeting of the presidents of trump and Poroshenko.

– And would approve the bill on additional sanctions against Russia, the House of representatives? And then it even got trump to sign…

– Why this law has gained support from “Republicans” and “Democrats”? In Washington still fear that trump might go for rapprochement with Russia?

– I think a lot of skepticism in Congress about the attitude of the President of trump to Putin.

– Maybe trump has decided to meet with Poroshenko right now to ease tensions in the Senate and Congress? After the scandal with the Russian intervention in elections does not cease.

– I think this may be part of the reason, but I don’t think that’s the main reason.

– What, in Your opinion, will be on the agenda of the talks trump with Poroshenko?

– I think Russia’s war against Ukraine would be an important issue. I think the question of sanctions will be raised. I think the process of promoting reforms will be important. And President of the trump always very interested in the economic and business issues. So maybe they raised the issue of Ukrainian-American economic cooperation.

– Can the trump to ask Poroshenko to present their vision of how to move the Minsk process?

– I think war and the diplomatic process will be discussed. I’d be surprised if the President trump will ask Ukraine to make concessions.

– At a hearing of the foreign Affairs Committee of the house of representatives Rex Tillerson made an ambiguous statement on the Minsk agreements. What did he mean by that?

– I have seen, it is unclear what he meant. Some believe that he meant that the requirements for Russia to be weakened. Others think he just meant that Minsk had reached an impasse.

– Maybe he meant that you need a different format of negotiations?

– There is no doubt. Must be an American agenda in this crisis. I don’t know whether we are talking about the participation (of the United States in the negotiations on the Donbas – Ed.) or this refers to something separate. But Tillerson stated clearly that America will play its role.

– Can the United States to join the “Normandy format” negotiations on the Donbass? Or will it be a resumption of the negotiation format Nuland-Surkov?

– Ukraine has always wanted to USA have been involved in this process. And we have to be involved. But it’s unclear in what format. Yes, perhaps the resumption of the track Nuland-Surkov. And I think all parties of the Minsk process will welcome such a move if it will be the most favorable. 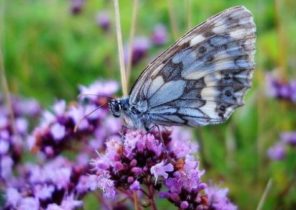