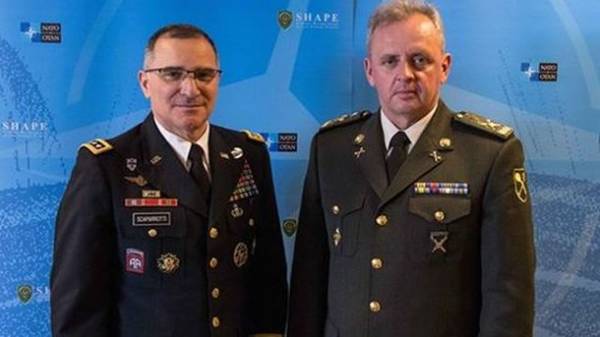 Being in the headquarters of NATO in Brussels, head of the General staff of Ukraine Viktor Muzhenko held a series of meetings with senior representatives of the Alliance, during which the sides discussed the situation in Donbas and the threat to the European security due to Russia’s actions.

As reported on Thursday evening the press-service of the armed forces, the Ukrainian delegation headed by Muzhenko held a meeting with the Deputy Secretary General of NATO rose Guatemalan and commander in chief of the United Armed forces of NATO in Europe, General Curtis Scaparotti.

The report notes that during meetings nachgenshtaba APU informed the NATO side “on the development of the security situation in Eastern Ukraine and threats to European security, which imply the strengthening of the military potential of the Russian Federation on the border with Ukraine, in the Crimea and in the Western regions of Russia”.

During the dialogue it was stressed that the situation in the East of Ukraine remains tense and is associated with the violation by militants of the progress of the Minsk agreements on the introduction of silence regime from 1 April and continued shelling of residential houses in the villages adjacent to the demarcation line.

“Russia continues to support terrorist groups in Eastern Ukraine through the supply system NFP means of logistical support, ammunition, fuel and lubricants and food, and also uses the occupied territories of Eastern Ukraine as a testing ground for new weapons and military equipment”, – stated in the information.

They also discussed the issues of implementation of an Integrated package of assistance from NATO for Ukraine and directions of further cooperation.

“During both meetings the representatives of the North Atlantic Treaty Organization assured the Ukrainian delegation in the immutability of support from NATO in defending Ukraine’s right to independence, territorial integrity and inviolability of state borders”, – the press service of the Ukrainian General staff.

In turn, Muzhenko thanked for practical support of Ukraine and its Armed forces in the context of improving their operational capabilities and interoperability with military forces of States-members of NATO.