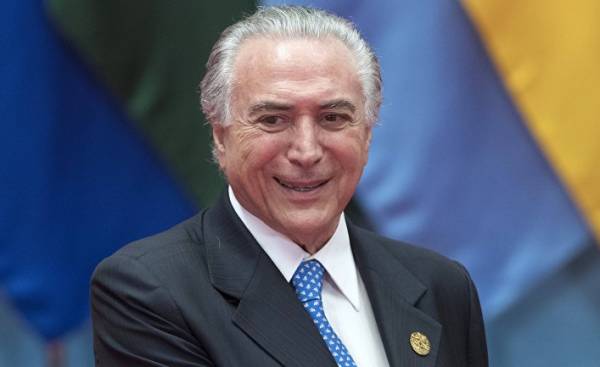 Next week will be my trip to Russia and Norway. During the visit meetings with President Vladimir Putin in Moscow and with king Harald V and Prime Minister Erna Solberg in Oslo. In both capitals, I also plan to talk to investors about the era of economic modernization, which today is in Brazil — about time a serious financial responsibility, greater rationality and legal protection. We have prepared based on these principles the business proposal, in particular, in the framework of the program Crescer. I once again decide to put the presidential diplomacy in the service of the interests of Brazilians: economic growth and job creation.

If you essential the support of the Congress we are carrying out reforms, which in Brazil was not undertaken long ago. We have achieved some tangible results: to take control of inflation and create conditions for a gradual reduction in interest rates to emerge from recession. But there is still a lot of unsolved problems. And here the key role played by foreign policy. The reorganization of Brazil depends largely on broader and more qualitative integration into the world.

The first stage of the trip will be a visit to Russia, which is one of the leading powers in the international arena. Here are our plans to attract investment based on a serious interest of the Russian investors have shown to the energy sector. In addition, we intend to explore the possibilities of infrastructure projects, such as the construction of Railways and ports.

We’ll bring in the Russian capital, the news of the completion of the Brazilian side of the internal procedures necessary for the early entry into force of a bilateral agreement that avoids double taxation and prevents tax evasion. In the course of the visit will be signed a number of agreements aimed at attracting investment and trade facilitation.

Reflecting the trajectory of the economic recovery in both countries, the trade turnover between Brazil and Russia during the first five months of 2017 have increased by more than 40% compared to the same period last year. However, we believe that the potential of both countries can significantly improve this figure.

In 2016 the share of Russia accounted for 60% of Brazilian meat imports. We are talking about a considerable volume of trade that is based on mutual trust. Meanwhile, given the size of the two economies, we hope for more. We are dedicated to the expansion of Brazilian agricultural products entering the Russian market, and to diversify our exports. In addition, we will work towards establishing closer relations between MERCOSUR and the Eurasian economic Union, which includes Russia, Armenia, Belarus, Kazakhstan and Kyrgyzstan.

In Moscow we will also have a political dialogue, which should be more systematic. Will sign a plan of bilateral consultations on the period 2018-2021. And thus secure our dialogue on the issues that unite Russian and Brazilians in the United Nations, G20, BRICS and other international organizations.

My visit to Russia will not be deprived of the cultural dimension. We will sign agreements that will pave the way for the establishment of the Brazilian cultural centers in Russia and Russian centers in Brazil. By the way, the football world Cup 2018, which will be held in Russia, will only contribute to further rapprochement of our countries.

With regard to Norway, the country we maintain long-standing relationships are crucial for Brazilian society and the world issue: environmental protection. Brazil is an environmental power. We and other countries are looking for solutions to environmental problems on a global scale. And sustainable development Norway is our most important partner. It was one of the first organizers of the Amazônia Fund, administered by the National Bank for economic and social development (BNDES), and remains the largest source of funding for this initiative.

Norway has already allocated Fund Amazônia 2.8 billion reais. Today, in areas such as combating deforestation, the ordering of land use and territorial and environmental management of indigenous lands, there are 89 projects. The implementation of these projects based on the principles of transparency, involving the governments of the States of Amazonia and civil society. We intend to confirm senior leaders in Norway the importance attached to our cooperation in the Affairs of the Fund.

The Scandinavian country is also the eighth largest foreign investor in Brazil, a significant share of Norwegian investments in the energy sector. Adopted in our country normative criteria for more predictable and safe, aroused particular interest among Norwegian businessmen. We are aiming to attract new investment.

In addition, Brazil seeks to expand trade with Norway. Recently completed the first round of negotiations on the agreement between MERCOSUR and the European free trade Association (EFTA), to which belong, in addition to Norway, Iceland, Liechtenstein and Switzerland. My visit to Oslo is part of our broader efforts aimed at effective universalization of international relations of Brazil, including economic and commercial issues.

As in Russia, I intend to support with our Norwegian partners are honest and open dialogue on issues of the global agenda. Norway takes active part in UN missions. She is the facilitator of the peace process between the Revolutionary armed forces of Colombia and, like Brazil, is among the group of countries supporting the negotiations between the Colombian government and national liberation Army (ELN). We also share many common interests in the political agenda.

In Moscow and Oslo we have a busy schedule. We will strive to strengthen the friendship and cooperation between the Brazilians and the Russians, Brazilians and Norwegians. Friendship based on mutual admiration and respect, as well as cooperation in development and the improved welfare of our peoples.