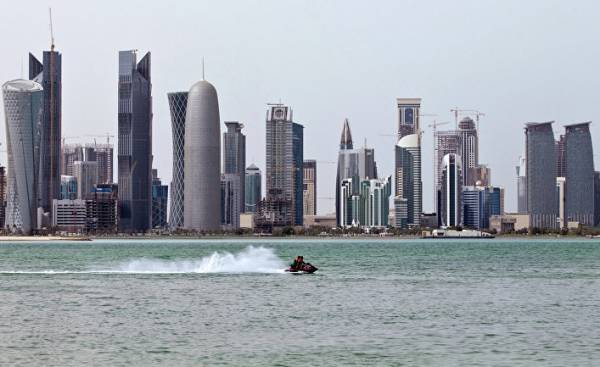 Russia gets the opportunity to assert its important role in the middle East, as a rule, in conditions of escalation. But this time the crossfire of diplomatic disputes did not play into the hands of the Kremlin.

The war zone in Iraq and Syria has provided the usual share of headlines. But a loud quarrel (allegedly provoked by hacking) between Qatar and neighboring Persian Gulf countries, led by Saudi Arabia hit the headlines. Moscow denies any involvement in the publication on the website of Qatari news agencies reported improved relations with Iran. In any case, this sabotage is clearly superior to the cyberattacks associated with the Russian “Patriotic hackers.” But amid the collapse of Arab “solidarity”, the price of oil remains steady, and so Russia should not expect additional revenues in the budget, experiencing the best of times.

Most experts emphasize the high level of tension between Qatar and Saudi Arabia, encouraging the Kremlin to exercise caution and patience. Putin held a series of telephone conversations with Qatari Emir, as well as with the leaders of Egypt and Turkey. In addition, last Friday, Moscow was visited by the Minister of foreign Affairs of Qatar. But the space for diplomatic mediation in Russia is rather limited. For the monarchies of the Persian Gulf, Moscow is still close to Iran and dependent on the Iranian “brothers in arms” in the Syrian conflict.

In the Kremlin, probably, not realized that they have become the regional ally of the Shiite coalition (which, incidentally, includes such dubious parties like Hezbollah), while only 4% of Russians consider Iran a friendly state. Moscow is trying to get out of this confusing situation, developing relations with Turkey. But if Recep Tayyip Erdogan supports Qatar, sending back a few hundred Turkish troops, Russia is not ready to demonstrate this commitment.

Russia definitely needs both in Turkey and in Iran. At least for the sake of the control over “zones of de-escalation” in Syria, which Putin has dubbed the beginning of the peace process in that war-torn country. Expressing the desire to confront the “Islamic state” (banned in Russia organization — approx. ed.), Russia does not intervene in the battle for Mosul and Raqqa, the outcome of which could radically change the dynamics of the wars in Iraq and Syria.

Moscow it is impossible to show sympathy for the Syrian Kurds, because this will undoubtedly irritate Ankara. The same ambiguous attitude of the Kremlin to the movement of Iraqi Kurds for independence. Russian missile strikes demonstrate the capabilities rather than achieve any purpose. Nevertheless, Moscow continues to protest against air strikes of the coalition led by the USA by Pro-government forces in Syria. Putin also noted the political situation in the United States, which, in his opinion, does not contribute to the solution of global problems.

Internal American politics really confusing. The demarche of the President of Donald trump vs Qatar does not fit with the official calling the U.S. Department of State to the weakening of the economic blockade it, suddenly a devotee ostracized state. On the foreign policy of Washington continues to be affected by the investigation of Russia’s intervention in the American elections. Sensational testimony of the former Director of the FBI James Komi in the Senate have not given direct evidence of collusion between the team of trump and Moscow (to the great relief of the White house), but gave an assessment of the extent of Russian cyber attacks in the past year.

The current situation does not Bode well for the scheduled meeting, trump and Putin during the July G20 summit in Hamburg. The Russian President was cautious in a recent interview, attempting to soften its anti-American attacks. But the propaganda machine never stops discredit of the US — 69% of Russians consider America an enemy state, which indicates a slight decrease from 72% last year. In this situation it is really difficult to understand how Russian mediation in the Qatar crisis could be acceptable to Washington.

Country interested in world prices of oil as much as Russia cannot claim the role of impartial mediator. Moreover, the shadow of the Ukrainian crisis, the Kremlin’s stalking everywhere. Every statement about the importance of dialogue between Russia and NATO immediately supplemented by statements about the need for capacity building to intimidate the enemy. And a series of military exercises, scheduled for this summer, probably only exacerbate mutual fears.

Every Russian diplomatic maneuvers in the middle East, not to mention missile strikes, inevitably interpreted in Europe (and to a lesser extent to discredit the White house), as attempts to gain advantage in the evolving confrontation.

In many political campaigns (the recent elections in the UK is an interesting exception) Russian hackers played the role of a sort of the villains, who are accused of different crimes. But really the main weapon of the Russian troublemakers is corruption. Thus, it is possible to draw a parallel between the Kremlin and the Persian Gulf monarchies: Saudi Arabia and Qatar, corruption feeds terrorism in Russia is corruption associated with espionage and organized crime. Of course, much easier to bomb the terrorists, and to track the hackers, digital fingerprints, than to follow the dirty money. Investigation in Washington may have crashed against the impenetrable wall, rolled down in the end to minor disputes. But in Moscow, Alexei Navalny, the charismatic Russian opposition leader, called on his supporters to the streets to Express opposition to the politics of corruption. And let its role today seems insignificant, but its political message is quite plausible. It could be the push that will destroy in the end the dominance of Putin.

Policy based on lies, often impregnable and insurmountable, and Russian intrigues in the middle East is a tricky and sophisticated. But given the current level of tension in Russia, everything can be resolved with a shocking suddenness.