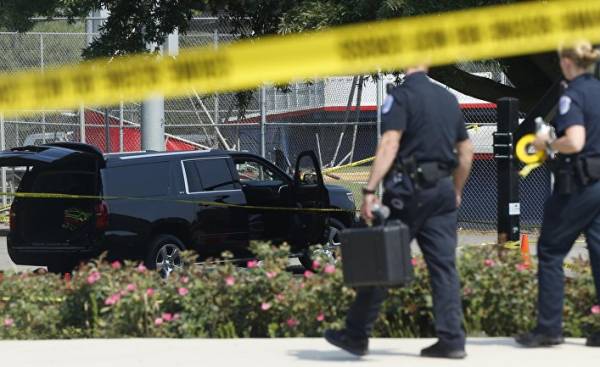 In the Washington suburb of Alexandria (Virginia) a man opened fire on a group of people, among whom was the coordinator of a faction of the Republicans in the house of representatives Steve Scales and other congressmen, told the Fox News channel.

According to the channel, Scales was wounded in the thigh. All suffered at least five people, said on CNN, house of representatives Mo Brooks. Police arrested a suspect.

Later, in the office of Scalise said that wounded in the thigh Congressman in surgery, his condition is stable.

The shooting occurred at the event of the house of representatives. At this time, Skales and his aides are trained on the baseball diamond. According to Brooks, the scene was Republican brad Wenstrup, doctor, he helped the wounded.

CNN reports that all he did 50-100 rounds from automatic weapons. About the assassination reported to the President Donald Trump.

“The Vice-President (Mike Pence) and I’m aware of the shooting incident in Virginia and is closely monitoring the situation. We are deeply saddened by this tragedy,” — said in a written statement to the President.

After the incident was heavily guarded Capitol, house of representatives operates in the normal mode.

The house of representatives Mo Brooks:

“We used my belt to use it to put pressure on it (Scalise — approx. ed.) leg. I ran around the baseball field. Was about 20-30-40 shots. In the end, the shooter began to make circles around third base and I fell to the ground next to the guy with a bullet wound in the leg.”

“I left early, probably, for a few moments before it happened and sat in the car with one of my colleagues Jeff Duncan, when we were approached by a guy and asked where the Republicans and Democrats. It was a little weird. And then he went to where it happened. We told this to the police”.

“If the police guarding the Congress, there was not, would have started a massacre. If he got to rest, no chance we never had”.

“I’m safe. I was at a baseball game congressmen, but left before shooting began, to catch an early meeting. I think I saw the shooter. Now I give testimony to the police. Pray for my colleagues, I worried about their condition”.

The Senator from Arizona, Jeff Flake:

“The arrow was shot. Scales was near second base and crawled 13 meters. I called my wife Kelisa his phone. I didn’t want that she woke up and found out about it on the news”.

“I felt I was back in Iraq, but no weapons.”

“When we were here this morning, the shooter walked up to the fence and just opened fire. I stood at the main base, he was on the third base line. He had a rifle, which was clearly intended for killing people, for the many victims. He had several clips of ammunition, he continued to charge and recharge”.