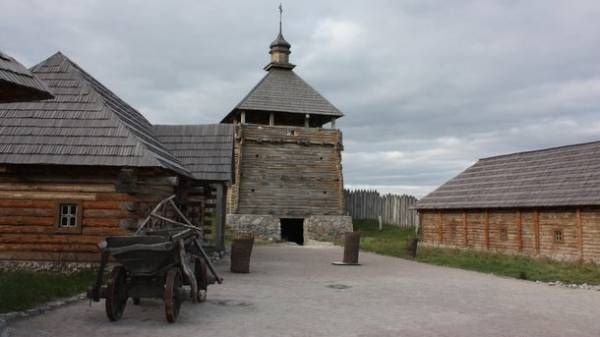 In Zaporozhye on Khortitsa island veterans of the war in the Donbass held a feast of the Cossacks of the Zaporozhian Sich destroyed 242 years ago, the Russian troops on the orders of Empress Catherine II.

As reported “Interfax-Ukraine” on Saturday on the island Khortytsia in Zaporizhia region, combat veterans, United in Cossack units, including the “Union of free Cossacks of Ukraine”, commemorated their heroic ancestors – the Cossacks of Zaporozhye Sech, looted and destroyed in June, 1775, the Royal troops on the orders of Russian Empress Catherine the Second .

During feasts, the participants held a prayer service on the Sich-the defenders of the Ukrainian lands in the Cossack Church in the historical and cultural complex “Zaporizhzhya Sich”, analyzed the lessons of the tragic history of the Cossack freemen “Cossack circle”.

“When we went to war, probably at the gene level in blood I felt the spirit of Sich, Haidamaks, defenders of the Ukrainian Insurgent Army. Our hearts, our land, our people remember their glory. Today we understand our duty to do everything that we have achieved that goal, why put the heads of our sister cities at different times of Ukrainian history. This is a free and independent Ukraine” – said the Agency a veteran of the war in the Donbass, the Deputy of the Zaporozhye city Council Oleg Kolomoets.

According to the marching ataman of the “Union of free Cossacks of Ukraine” Ivan Matvienko, despite the fact that the Sich was destroyed and looted by the Russian army, the enemy failed to destroy the memory of the Ukrainian people, their language, culture, the will to freedom.

“Little-known page of history after the destruction of the Sich, the part of the Sich Cossacks-Cossacks went not only for don, and the Danube and the bug. There was a bug based Sich, so to speak, the basic unit of the Ukrainian Insurgent Army in Lviv region. Spark of the spirit of Zaporozhye liberties are preserved there. Today tragic time 2014-2015, United all Ukrainians who have this spirit of freedom – United kids of the free Cossacks” – said the Agency the marching ataman of the Union of free Cossacks of Ukraine Ivan Matvienko.

Combat veterans said that the Ukrainians will put an end to the history of the destruction of Zaporozhye Sech Russians, when defeat of the enemy in the Donbas and in the Crimea.