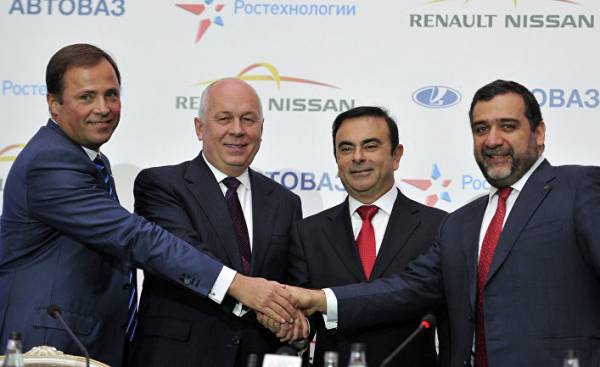 After years of collapse of the Russian market starts to revive. Financial indicators of the beginning of the year suggests that the cars of the Renault group (including Lada) have now every opportunity to take advantage of this surge in the market. The group has all the necessary leverage to increase the profit on this difficult market.

Renault is making serious bets on the Russian market to such an extent that his fall has not deterred investors and prevented to increase the share of Lada. It seems that a French band gets finally out of the plight.

Nicolas Mor (Nicolas Maure), the head of the Russian branch of Renault in 2016, all reassured, saying this weekend that the company was able to stop short-term liquidity risks.

“We pay our providers, our mediators are paid on time, as we have no short-term liquidity risks,” said Moore on the sidelines of the Economic forum in St. Petersburg.

According to Nicolas Mora, AVTOVAZ successfully eliminated its net loss. It has already been reduced by 40% over the first two years and declined three times in the first trimester to 45 million euros. Operating loss decreased six times (16 million euros).

All this became possible thanks to the resumption of sales. Turnover increased by 20% in the first three months of the current year to 720 million euros. “The results are much better than last year,” said Moore, who hopes to profit growth, starting in 2018. “Let’s see what happens this year,” he adds, not wanting to get ahead of myself and hoping for a good surprise in terms of sales in the second trimester.

Since the beginning of this year AVTOVAZ has used the market recovery and even increases its market share. While the national market grew by 2.6% in the first four months, sales of Lada increased by 8%, according to the Association of European businesses (AEB). Sales of Renault (4th place after Kia and Hyundai) increased by 14%. In total, Renault-Nissan Alliance is almost 35% of the Russian market. Last year the figure was 33%.

In 2017 the market will grow. Renault hopes for the best

In fact, the French company is very proud that she was able to stabilize sales in the country. While the 2016 fiscal year on the market ended with the final figures on the stock exchange (-11%), Lada recorded a drop by 1%, while sales of Renault cars dropped by only 3%.

The AEB believes that the market could grow by 4% this year. Nicolas Moore expects growth in the range of 5 — 10%. Anyway, Russia, with its 1.5 million registered vehicles, still far from the record of 2012-2013, when would be sold about 3 million cars.

But to return to net profit counting on the French not only on the rise in the domestic market. Renault has embarked on a major project at the historic Lada plant in Togliatti, in order to increase their productivity. The plant needs a lot of effort to return to company standards. More recently, the main factory of Lada, whose production capacity can reach 1 million units, showing the level of performance is 25% lower than the Dacia plant in Romania.

AvtoVAZ under the pressure of competitiveness indicators

The problem of production management has been exacerbated by the increase in the share capital of Renault last winter. The French now owns 70% shares, while Nissan and Rostec have 30%.Renault now includes accounts of Russian companies in their financial statements. So now talking about the loss of money is not.

Over time, this market may take the first place in Europe, ahead of Germany. In Russia 30% of the population owns a car (compared to 80% in Western Europe), and 50% of these cars over 10 years old… Carlos Ghosn (Carlos Ghosn), the head of the Alliance Renault – Nissan, believes that the Russian market is poised for growth.