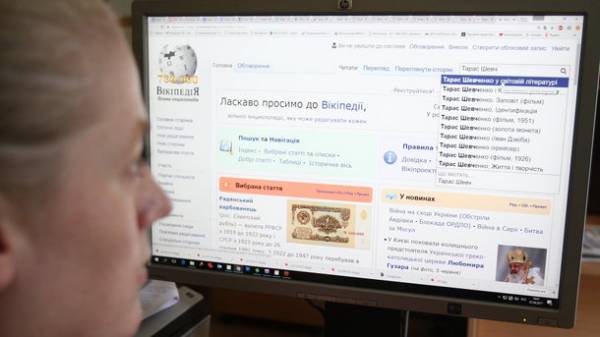 Our version of Wikipedia, a free electronic encyclopedia, bragged about his record, now it’s 700 thousand articles in the Ukrainian language. Now we are at the 16th place among 295 languages from all over the world, is located between the versions in Chinese and Persian languages (see infographic). In the beginning of the list the English version (5.4 million items), Cebuano (language spoken in the Philippines, 4.5 million entries) and Swedish (3.7 million items). 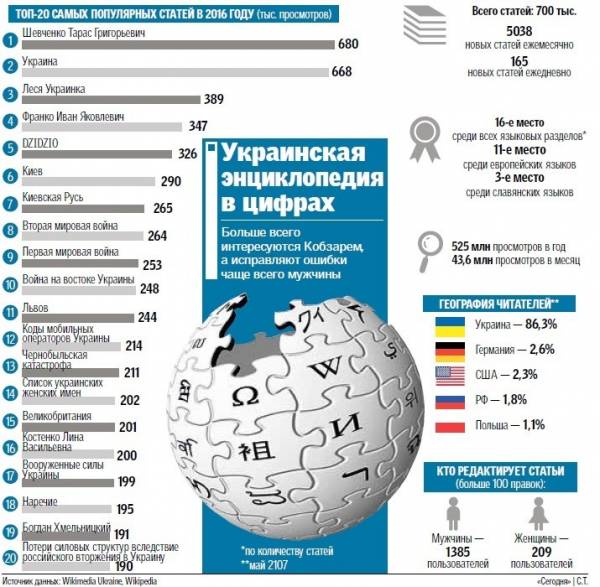 As activists considered, in 13 years of existence, the Wikipedia (in the world earned 16 years ago) was the largest in the history of the encyclopedia in the Ukrainian language, in comparison, of the 700 thousand published articles would be 326 volumes of the Great Soviet encyclopedia. Incidentally, the first article was written on 30 January 2004 the Ukrainian user from Japan — it was called “Atom”. Many articles in the Ukrainian version of duplicate texts from the Encyclopedia of Ukrainian studies, the Ukrainian Soviet encyclopedia, Reference book on the history of Ukraine and certain public resources, such as the Cabinet. Also of the interesting facts: the Wiki contains the full information about Ukrainian settlements.

A distinctive feature of the electronic ENCYCLOPAEDIA — it is a non-profit project, and users are allowed to write their own articles and edit existing. So, the jubilee of 700-thousand material was the article “Open championship of Australia on tennis 1987 men a single discharge,” which was written by Alexander Tagaev (three years on the website he has created almost 2,500, has added about 100 articles and edited 25 thousand materials).

Statistics show that Ukrainian users actively engaged in the revision of the encyclopedia: on our Wikipedia registered more than 361 thousand users, who made 20.6 million revisions of existing articles. Of these, more than 60 thousand people at least once something has been edited on the website, and 16 thousand have done it more than ten times. On average for the month at least one Ukrainian editing pages makes about 2,5 thousand persons from Ukraine, Germany, Russia, USA, Czech Republic, China and Canada.