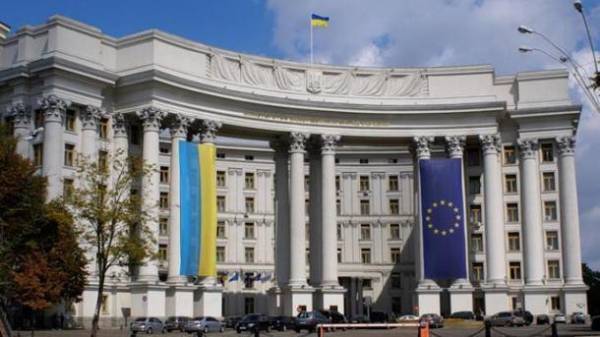 The Ministry of foreign Affairs of Ukraine expressed its protest in connection with the illegal stay of a group of Russian officials headed by Valentina Matvienko on the territory of the Autonomous Republic of Crimea.

“The Ministry of foreign Affairs of Ukraine expresses its decisive protest in connection with another illegal visit to the Autonomous Republic of Crimea, which is part of the sovereign territory of Ukraine, temporarily occupied by the Russian Federation, the group of high-ranking state-occupier headed by the Chairman of the Federation Council of the Federal Assembly of the Russian Federation Valentina Matviyenko that took place with gross violations of Ukrainian legislation and international law,” – said in a statement on the Ministry website on Tuesday evening.

The Ukrainian foreign Ministry this step of the Russian side consider as a blatant disregard for the sovereignty of Ukraine.

“Considering this and other similar so-called “visits” the leadership of the Russian Federation as a blatant disregard for the Kremlin state sovereignty of Ukraine, the UN Charter, resolutions of the UN General Assembly “Territorial integrity of Ukraine,” A/Res/68/262 of 27 March 2014, “the State of human rights in the Autonomous Republic of Crimea and Sevastopol (Ukraine)” A/Res/71/205 of 19 December 2016, the Baku Declaration and resolutions of the parliamentary Assembly of the OSCE commitments under bilateral treaties and other rules of international law”, stressed the foreign Ministry of Ukraine.

In this regard, the Ministry of foreign Affairs of the Russian Federation was handed a note of protest.