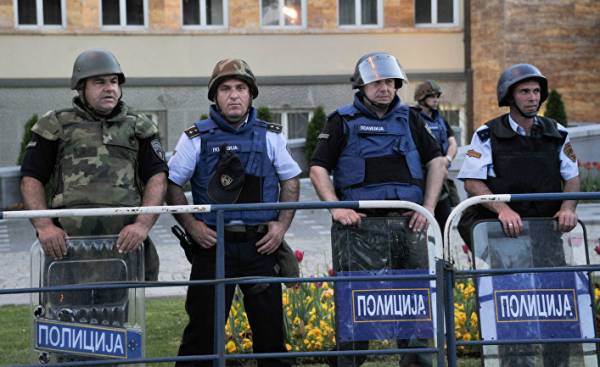 According to leaked available to the Guardian the documents of the Macedonian intelligence agencies, the Kremlin wants to prevent the accession of the Balkan countries in NATO and seeks to bring them under Western influence.

Russian spies and diplomats for almost a decade spread propaganda and sow discord in Macedonia, it follows from the data of the Macedonian secret intelligence services.

According to these documents, Moscow seeks to increase its influence in all countries that were part of the former Yugoslavia. It is supposed that the Kremlin wants to prevent them to join NATO and withdraw them from the influence of the West.

The documents were at the disposal of the Project for the investigation of corruption and organized crime, share them with the Guardian. They also demonstrate that the Serbian intelligence have tried to maintain in Macedonia, Pro-Russian and anti-Western nationalists.

A compilation of the documents in question contains the secret reports compiled by the Macedonian counter-intelligence.

On Wednesday, the leader of the Macedonian social Democrats, Zoran Zaev took office as Prime Minister after six months of political crisis. His new center-left coalition enjoys the support of the two parties of the ethnic Albanian minority.

Zaev promised to fight corruption and implement economic reforms. He wants Macedonia to join the EU and NATO. About a quarter of the two million population are ethnic Albanians.

Macedonian nationalists and supporters of the former Prime Minister — conservative Nikola Gruevski is accusing zaeva that he’s giving the Albanians too much power. In April, a crowd of Gruevski’s supporters broke into the Parliament building in Skopje, the capital of the country, and beat zaeva and a few others.

As shown by the documents of counterintelligence, the attempts of Russia and Serbia to push Macedonia from the West contributed to the development of the country’s long-term political and ethnic crisis.

Macedonia in the past nine years was faced with “active subversive propaganda and intelligence activities”, which was directed from the Russian Embassy, said in a report this year for Vladimir Atanasovskoe, head of the Macedonian office of security and counterintelligence.

This operation began in 2008, when Greece — the southern neighbor of Macedonia, blocked the attempt of the country to join NATO. Athens does not agree that this country is called Macedonia.

“Strategy of the Russian Federation in the Balkans involves the use of tools and methods of so-called soft power. Its task is to protect the country [Macedonia] from the influence of the West,” say the authors of the document.

It also emphasizes that the Russian policy in the region “closely aligned” with the energy strategy. The Kremlin wants to take control of “strategic energy resources through partnerships with the Balkan countries” and to put Macedonia in “complete dependence”.

The documents also shed light on how the Kremlin carries out espionage.

It follows that in Skopje are the three agents of the SVR — Russian foreign intelligence service is subordinate to the residency in Belgrade, capital of Serbia. In the Russian Embassy in Macedonia there are four spy of the GRU — Russian military intelligence. Their actions koordiniruyutsya from the GRU base in the Bulgarian Sofia.

Reportedly, Russian diplomats are “very careful” when communicating with your contacts. They are often “in the last time, change the meeting place”, do not use mobile phones and use passwords and legends. Russian agents offered to Macedonian media, the money for the dissemination of “information and misinformation”, according to the documents.

Moreover, Russia dramatically increased the cultural activities in Macedonia. It promotes the idea of “pan-Slavic identity” and emphasizes the common Orthodox Christian faith.

Under the auspices of its Embassy was established about 30 societies of the Macedonian-Russian friendship. According to the documents, she also opened a cultural centre in Skopje and is sponsoring the installation across the country, Orthodox crosses and Church buildings in the Russian style. The documents also alleged that Russian consulates in the cities of Bitola and Ohrid serve as “bases for intelligence.”

The results achieved in the end Moscow, look ambiguous. Russia openly supports Gruevski, who was forced to resign in January to resign because of allegations that his sanctions were intercepted conversations of thousands of Macedonian citizens.

The special Prosecutor now is investigating in relation to Gruevski and a range of senior conservatives. They are accused of abuse of power, money laundering and corruption. They deny their guilt.

After the December elections, an absolute majority in Parliament was not one of the parties. Russia has accused the US and EU of meddling in the electoral process and said that the West, supporting zaeva, seeks to divide the Balkans and to create a “Great Albania”.

As for the confrontation between NATO, the Kremlin has suffered a series of setbacks. In April, the Parliament of Montenegro voted to join the Alliance. Bosnia and Herzegovina is a candidate for accession. Even Belgrade strengthens ties with this organization, despite the hostility that you feel towards NATO, many Serbs from bombing Serbia in the 1990-ies.

In a separate document referred to held in April the meeting between the Russian Ambassador to Macedonia Oleg Shcherbak and high-ranking officials of the Macedonian Ministry of foreign Affairs Nenad Kolev. Shcherbak, was reported to have said that the goal is to create in the Balkans “strip neutral militarily countries”, which will include Montenegro, Bosnia and Herzegovina, Macedonia and Serbia.

The Ambassador mentioned the European Union and NATO “jackals” and stressed that Russia is now “a leader in global Affairs”. He also warned that Macedonia needs to openly support the Kremlin’s political course and that otherwise its economic and diplomatic consequences.

Representatives of the Russian Ministry of foreign Affairs has not responded to questions sent to them in writing PROP and its partners, the Macedonian TV channel NOVA TV and Serbian Network of crime and corruption.

Zaev has not commented on the situation directly. He noted that in April warned that if EU and USA do not show interest in the region, Moscow has “more room to impose their interests.”