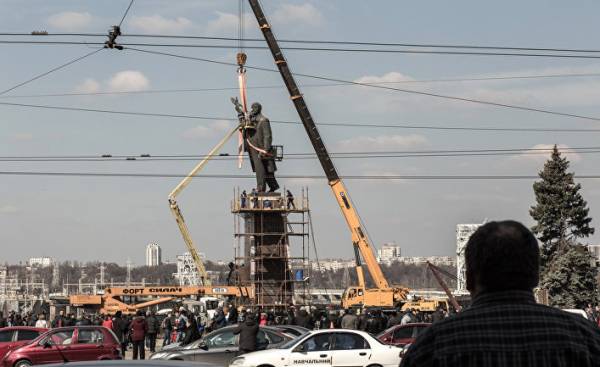 “Leninabad” was the beginning of a long-brewing in Ukraine de-communization. Curve, slanting, hasty, ill-conceived, kostrubala — you can say whatever you like, but it goes. Is as if we have very little time! Is like we customise the fear to miss your chance to break away from its colonial past.

What caused this fear? We do not yet have your Mahatma Gandhi, who would not spare his time for an explanation of the reconciliation and determination of the prospects. Therefore, we are forced to run forward and pick off all the anchors and shackles of the past. But this desire encompasses more and more Ukrainians.

Why do we need this gap? We want to escape from the unwelcome and hateful embrace. This feeling can be compared to a family where violence occurs — beaten in the kidneys and liver. Do not touch the face, the neighbors something suspicious. And pretend we are a happy family? We do not terpily! We don’t belong in a stuffy Imperial heaven. Divorce is inevitable, even if the other party is not aware and not willing to let us go.

We are difficult to understand. To many outside of Ukraine, even scary for us to watch. Yes, every day is a challenge, every minute is lost the future. So we’re in a hurry! We are accused that extends galichanskogo nationalism. There is a certain truth. But it’s a vaccine that you need to survive, not to lose national identity.

What is behind all this? American, European, Russian technology? Yes, what you want. In 25 years here hesitated, the crowd of political consultants — they burn in hell all! They broke the backbone of the nascent identity. But they “helped” us to develop immunity — we have lost the virginal naivete and gained a solid mistrust everything that we are trying to impose. Today it is difficult to describe: who is Ukrainian, we went beyond the narrow national definitions of this concept. Ukrainians today can be determined by values.

So for all this, it’s all still worth it? It — freedom! This word explains everything that happens in our country. This is the full outcome of previous meanings and symbols, a total rejection of anything that might restrict individual freedom. This is a painful condition of the birth of the new — for de-communization would come debanderizatsiya, crazed tolerance will come to those concepts that will fit in the spiritual and moral world of the Ukrainians, and conform to universal values.

Why have we become so different? Because our people have managed to rip the power the veil of sacredness, elegance and eternity. We know exactly who is tearing our country and kill our desire for freedom is evil is living outside and eating inside. We learn to influence the government without the Maidan. We sowed fear in the hearts of all the ruling on the post-Soviet space usurpers. We’ve been through a lot and more than began to understand. This path will have to go to everyone who today seeks in the past the basis. We were different because we grew up. And that’s why we so hard today to understand and accept.